The Vision, his semen, and his friends

That’s the second issue I received in the mail upon becoming a member of Friends Of Ol’ Marvel in 1975. As you can see, it featured the Vision, introduced with great force & verve during the later stage of Roy Thomas’ Avengers run, and developed into one of the finest favorite heroes of the day by Steve Englehart, the writer on the book when this issue of FOOM came out.

In the featured interview, they’re talking about the Vision and Scarlet Witch, understandably, as during Englehart’s run, he brought the whole tortured-attraction thing to its end, first with much whacked soap opera involving the Swordsman and Mantis (who became the Celestial Madonna, instead of Moondragon; this was when cockamamie Marvel plots were written on the good stuff, or so I speculate) and then with them getting married. The story of this event had been published just weeks before. 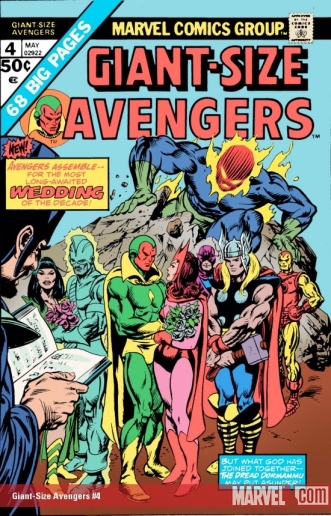 That’s Mantis on the left there, getting married to some cosmic plant whatsis who’s taken the glowy semblance of the dead Swordsman which is creepy and gross. In this or one of the associated stories, they have sex, like actually on-panel, with a swirly Tao symbol in the background. See too how Iron Man, Thor, and an itsy bit of Hawkeye are wedged into the art to confirm that this is at least nominally an issue of The Avengers. For the life of me I can’t recall what Dormammu had to do with it, and since Celestial Madonna necrophiliac Tao sex is going on, who cares?

In the FOOM interview, the conversation turns toward whether the Vision and the Scarlet Witch can have a kid, what with the Vizh being basically made out of plastic.

You gotta love 70s interviews, there’s no attention to protecting a brand or selling oneself as a product. It’s like watching Soul Train and realizing that no, there was no wardrobe person who double-checked every stitch before someone went on camera, they just showed up and whatever they wore went on-screen with them. And as for what they said or might say, who knows? Roll’em!

Case in point: Englehart mentions artificial insemination as the obvious and only solution.

It’s more topical than you might think. Obviously livestock techniques had been around for a long time, and even using frozen sperm dates back to the 1950s, but the 1970s is when the commercial sperm bank entered the culture. It was a big topic of the day right alongside vasectomies, in tandem in fact, with much talk of storing one’s sperm and then getting snipped, for babyless screwing with the option of a screwingless baby later, if you wanted one. This sort of thing figured heavily in Alvin Toffler’s Future Shock, a book which I am certain Englehart knew by heart.

For perspective, the Roman Catholic Church had pronounced the Pill impermissible in 1968 after over four years of deliberation, Roe vs. Wade went on from about 1970 through 1972, and IVF was as hot and undecided a topic between the legislature and the National Institutes of Health as cloning and stem cells are in recent memory. As with stem cells, genetic engineering, and cloning (completely different things), sperm donation was hopelessly entangled in the public mind with in vitro fertilization. The travails of a hapless showcase couple named John and Doris Del-Zio were in and out of the news for years, including one literal case of sabotaging their attempt at IVF. I think the term “test tube baby” emerged specifically from their media coverage, and again in an English woman’s pregnancy a few years later.

In the early 1960s, a donor insemination (DI) pregnancy was ruled legitimate (i.e. the child was not illegitimate) by a Georgia court. In 1968, a man named Sorensen was held legally accountable for child support for the DI child born to his wife. In 1973, the Uniform Parentage Act settled it federally that the donor is not legally the father, ever.

Consider the generation time too – this is when the people who were about ten when the Pill became available were confronting grown-up choices, even as both the technology and law were in flux. They were looking for economic options, but they were also trying to figure out what was right, at best, and at the very least, cool. Drs. Rothman and Sims opened the first commercial sperm bank, the California Cryobank, in 1977. Therefore Steve’s mention was not politically neutral, as a casual reference to an everyday technological convenience. In 90s terms, he might as well have talked about a Marvel character getting an abortion in an it’s-an-option way. In fact, much like abortion prior to Roe vs. Wade, sperm donation prior to the mid-70s was widespread but kept very quiet pending the settling of its legal status.

Anyway, simply, completely unstudied, an ordinary guy talkin’, riffin’ on the subject, Englehart muses about whose sperm would be used and suggests that Steve Rogers or Jarvis would be the obvious candidates. As a possible story in the Avengers. Thinking nothing of it, the editor of FOOM sends it to the printer and off the issues go to the eleven-year-olds like me.

Can you imagine the PR lawyers getting smacked with that kind of interview in the bona fide oh-ficial Marvel fan magazine today? Holeeee shit, I can see it now, the barrage of “our fine author didn’t mean that,” quickly changing to “our fine author didn’t say that,” and “speculation that semen or sperm exists in the Marvel Universe 616 or otherwise is completely unfounded,” “Marvel Entertainment, its employees, and all its affiliates have no idea what sperm, or this other thing, artificial insemination, actually are,” as heads quietly roll behind corporate doors, and a zillion injunctions fly to scotch the twittering and youtubes with bogus proprietary claims … countered of course by viral internet JPEGs of cosplay tableaux including turkey basters and a run on Jarvis-costume wear.

Better times, my friends. Those were better times.

There’s a sad ending for me here too. Sometimes it’s not good to revisit a beloved title. Exactly a decade later, somewhere in the mass of incomprehensible blithering that was the Secret Wars 2, in one of the V & SW miniseries, Wanda used a hex to mess with whatever it is the Vizh regularly squirted into her unmentionable, and got pregnant that way.

There’s gotta be something in there to hex, right?

I read that issue with some sadness, especially since it had been written by Englehart. The equivalent panels depicting the vial delivered to the grateful couple with some pride by Cap and/or Jarvis vanished from the realm of imagination, never to be seen again.

Next: At corporate, they just sell paper