← The Vision, his semen, and his friends
A thousand years more, O Kali →

At corporate, they just sell paper

You think they care what it is?

The Koch bros don’t give a shit, no pun intended, whether you buy Quilted Northern or Angel Soft, because they own them both.

Some years ago some venture capitalists found that, inexplicably, you can sell even more cheap paper to people if you invest a bit in writing on it and coloring it first. Comics are a particularly simple form of that kind of paper. The primary cost is buying it and distributing it in slightly altered form, with some writing and coloring, folded this way or that, with staples or whatever.

And that’s it. Buying cheap paper in bulk, low and selling it in bulk, high, with minimal modification in between. The modification is completely irrelevant; all higher-level mucking with creative content is merely crapshoots, no pun intended, at how much some particular exec pushes the already-ridiculous profit margin a little harder. It doesn’t even matter much, they know they’ll sell a metric ton of it, so such attention to “improvement” is nothing more than a little cutthroat game among the mid-levels to get this or that title boosted by an eighth of a percent in time for the next one-man-gets-it promotion.

In the late 80s and early 90s, my friend Ed was breaking into comics, in small part via me and my friendships at First and DC, but certainly on his own talent. He told me about trying to extract some pay owed him by Andrew Rev, then publisher of Comico. Rev took a copy of a latest printing at random off the stack that was sitting on the table, and ripped it in half, to show Ed what he thought of it. “I just lost ten cents,” he said, smirking. 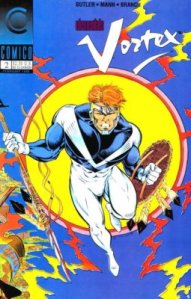 Or possibly this one.

You see his point? He’s making it clear to this, this pieceworker that he thinks literally nothing of the creative effort, of the idea that this was a quality product to be respected. It was investment in paper, nothing more. The message is, if you want to write comics, know your place. Ed’s eyes were wide with horror as he related this to me; his voice shook with disbelief. He’d never imagined that people who brought comics into physical existence not only despised them, but enjoyed despising them and any hint of respect or enjoyment the creative team might feel about it. We talked about it a bit but I don’t think he heard anything I said, as he repeated, “He just … ripped it in half …” (OK, that’s how I remember it, but might be dramatizing – Ed did leave with a check, which is more than many can say, as far as Rev is concerned.)

That was then, and that was how it was before then, and that’s how it is now. The people who have absolute power over whether your beloved title continues to exist, and absolute power over who will be turning those pages from blank into inky, not only don’t care about what’s in it, they can’t even fathom caring about anything that could be in it. Some people buy Angel Soft, and wipe their asses with it; some buy Quilted Northern, and surprise! they wipe their asses with it. Same goes for this-or-that comics title. This-or-that comics writer or artist. This-or-that comics character or storyline.

(A brief pause for good news: Ed is the happy comics-maker of Labratz and Mongrel; see also the successful Mongrel Kickstarter.l

“Movies,” you say, “But the movies -” Sheeeee-it! Don’t tell me the movies have anything to do with making comics good. Comics are mere promotional gimmick devices for movies now, have been for about twenty-five years. Toys and comics are the only purpose for the content that these people understand. They pay to get the comics made only to see those toy and/for film-associated images on shelves, on that odd paper which people are inexplicably buying. It’s pure eyeballs-oriented advertising, and the very idea that what’s actually printed in this or that image has other content, let alone good or bad, is foreign to them. Wait, scratch that, they know it’s potentially actionable, so they have lawyers to make sure it isn’t, or that they’re untouchable if it is, but that’s it as far as content goes.

All this applies even when the movies are good. I like good movies too. But movies, good or bad, distract you from the unalterable point about the comics.

I’ll pull some bits from Sean Howe’s book Marvel Comics: The Untold Story to illustrate. In the early 1980s, Mattel had lost the bid for action figure-ing DC comics characters, so it planned a big Marvel line and told the comics company to produce and aggressively promote a series with all the characters, even providing the name using two words which, according to their grinning marketeers, teenage boys could not help but squee at.

Don’t even make me say what this paper is good for.

Cheap paper is bought in bulk and sold in bulk, and toy-marketers high-five because, inexplicably, somehow this ad space isn’t wholly sunk cost, because people are actually paying to look at the billboards. Free advertising.

This isn’t the 60s, there isn’t going to be a Stan Lee with a big mouth and carte blanche with no oversight or even plan in a throwaway business which happens to have guaranteed national distribution, or a Roy Thomas with no real job history (he’d been a high-school English teacher) and no corporate identity taking on the editorship of a major comics company, also with zip-zero oversight and no identifiable business plan, and saying, a bit wildly, “Let’s go!” I’m not idealizing – those weren’t days of high-minded idealism and artistic integrity, but rather the days of hustle to get to the movies and toys, merely before the latter exerted their larger pressure to start affecting the colored-paper’s content, leaving a whole lot of opportunity for funky creation from people who – as far as I can tell – simply couldn’t help doing it. Those days are not only over, they are expunged. Vanished into the memory hole. Un-history.

I’ll dissect out the comparison for you. In 1968, it’s a lovely Koch bros situation, as Kinney National merged with, or rather engulfed DC’s larger company (which owned in addition to the comics company, Family Circle and Playboy … see what I mean?). Kinney National already owned Independent News, which was Marvel’s distribution lifeline. Kinney gave not even a fuck for the difference between Marvel and DC, and even less of a not-a-fuck about this-or that Marvel title. The ink could have been scribble-scrabble or a pattern of daisies for all they cared. Similarly, when a modicum of editorial order was imposed during the 1970s, it was so variable, and certain creators on certain non-alpha titles were so cunning as to dodge it (for instance proofing one another’s books which means not doing it at all), that the titles varied between utterly terrible – like Spider-Man and the other flagships which received the most attention – to pretty good, or even brilliant and bizarre. Again, because for those books, considering their content at all was completely beyond the mindset of Cadence Industries, Marvel’s current controlling entity.

So I’m not talking about any difference in corporate values between the late 60s and the very late 70s. They were the same. The difference lies in the degree to which the owning entities took even the slightest notice of the comics’ content. Back then? Not even a blink. After the late 70s? Now that the toys were known commodities, and after the practically unique success of the Superman movie, the owning entities did exert authority over the comics’ content, solely as toy advertising in the most dismissive, just-do-it manner possible.

Believe it: your priorities in reading and enjoying this stuff are entirely irrelevant to anyone who has power over its existence, except for the possibility that you will buy a toy or a movie ticket. But it’s true: down in the cubicles, in part because of that corporate disconnect from the product (“text” if you want to be high-minded), the creative team’s priorities in making it might correspond to that reading enjoyment … a little. Sometimes. Usually by luck, when they’re not being monitored, and not for very long. It cannot be sustained in any single case, ever. Comics quality, especially superhero comics quality, is an ice sculpture at a very tacky Florida business convention, a castle in the sand at a crap fabricated vacation beach at some pesthole drainage lake in the midwest, a beautiful drawing by a lonely nine-year-old kid whose parents never put it on the refrigerator or into a scrapbook, crumpled on some floor somewhere.

Love good comics for that. Any other reason makes me sick, vomit-sick, murderous-sick. To hell with your “superheroes are popular at last because movies,” your “the mainstream loves superheroes now,” your “comics will be so good from now on.” That sense of validation is nothing but the cha-ching of consumerism, more paper pushing, more ass-wiping, and it’s even flat wrong – comics have always made movies great, but not even a teeny bit the other way around. Most of’em are a hundred times worse than they ever were, with their brash cheesiness masked by commercial cool, their basic storytelling fun gutted by tie-in activities and products, the characterizations shifted to correspond to star power, their strange potential for edge politics self-censored into oblivion, even their very physical newsprint trashiness replaced by high-tech gloss. Yeah, sure. That’s fucking great.

All the more reason to love the good in there, when you see it, if you can even tell the difference from geek status cred or from movie consumer confirmation … so when you do, love it for real.

No one else will.

← The Vision, his semen, and his friends
A thousand years more, O Kali →