← At corporate, they just sell paper
Bootin’ the pooch → 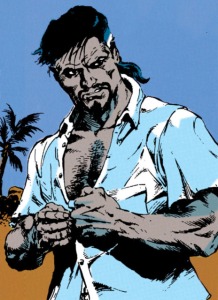 You know how “smart” in comics actually means stupid? This time, as they often did in Suicide Squad, John Ostrander and Kim Yale pulled a reversal: a character introduced as a superficial fanatic, never billed as or discussed otherwise, who was smart as a whip. Wikipedia tells me he only appeared in twenty-two comics issues, ever, associated only with this series, but they were solid gold.

Ravan arrived in issue #1 of the series (spring 1987) as a member of the group Jihad, the single non-ideological member who hired on solely so he could serve his own ideology, to stave off the Kali-Yuga by killing lots and lots of people. During the confrontation, the Bronze Tiger broke his spine. In a later issue, he showed up still with the revised Jihad, wearing a supporting exoskeleton – and when defeated again (as the Tiger is sneaky enough to hit the “off” button), accepted his opponent’s recruitment pitch to join the Squad. You know, because he can kill more people in doing so – the Tiger is quite frank about this selling point. Ravan was, I think, the first Squad member who was field-recruited this way instead of being a sentenced criminal who was officially chuted to the program, or a nutbar who volunteered for some strange reason. 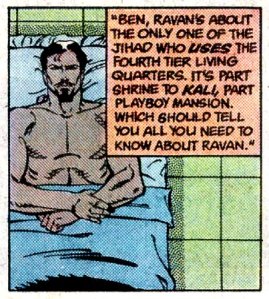 His first appearance implies he’s a sybarite, but that doesn’t show up in the stories again, unfortunately.

Like the immortal Captain Boomerang, Ravan was one of the very few Suicide Squad members who was completely sane … and like every single one of them in that very small category, was also a completely amoral son of a bitch. Even more fun, unlike the Captain who would dearly have loved to sell out or otherwise painfully hose his teammates if he ever managed it, Ravan was completely trustworthy. They promised him he’d (i) get to kill a lot of people for Kali, and (ii) get a chance to kill Kobra sooner or later, and he said, “OK!” and that was that.

It’s hard to find anyone simply as bad-ass. No superpowers – in fact, remember he’s got a crippled back – all he’s got is mad fighting skills (90s DC talk: on the tier a hair short of the Bronze Tiger, and the Tiger is a match for Batman), those pajamas, and a bit of rope, and he’s fine with taking on anyone. He’d “loom up behind you” and gurrrk!

Or “urkagk,” whatever, I’m not picky

He apparently enjoys his work but he’s also super-clinical about it, possibly the most murderous person in DC Comics – seriously, the Joker does big bang-aramathons, but Ravan just goes one by one and never stops.

He often contributed in this manner to mission policy, and one can’t help but wonder whether he was taking the piss the whole time.

Plus he was hilarious. “Not to worry, I did not get any blood on the uniforms.”

Too, more often than not, insightful to the point of sinister: “Greetings, man of the bat, beloved of Kali.” Even when his frenemy the Bronze Tiger goes through a hero/villain breakdown and challenges him to a final fight, Ravan totally punks him verbally with one of the finest don’t even try to be evil, I know evil and it ain’t you speeches in comics.

But what really gets me is the smart. Not once does he carry the idiot ball. He doesn’t come out of left field with a betrayal because he’s the villunz. He doesn’t cut out on a fight because he has a later agenda, nor does he go running in like a dork to get shot to pieces (like several other Squad members, to say the least). He knows exactly what kind of people his employers are, makes his deal with them entirely above-board, and at one point helps carry out the single most vicious act Amanda Waller ever orders. He does their job, holds them to the deal they cut with him, and they make good with it. For someone whose most typical phrasing is Hollywood India, all “not to worry,” and as mentioned above, a veritable killing machine, not once does he conform to the plot-addled villain stereotype.

The end came with #45-47 (late 1990), one of the best stories of the best phase of the Suicide Squad, in which John and Kim fearlessly put Vixen and the Bronze Tiger not only in sympathy with Palestinian resistance (unnamed but only barely) but having fought for the PFLP,  and because of that, the trouble the Squad had working with the Israeli government. It all hinged on Kobra manipulating exactly that government’s intransigence and arrogance into getting the Dome of the Rock destroyed and ushering in World War III.

You might consider that this story was written on the eve of Gulf War I, when any fool could see we were rolling into Iraq any minute now, and the media was exploding with false stories about Iraqi soldiers dumping Kuwaiti babies out of incubators onto the floor … and the brutal quelling of the 1987-1989 First Intifada in Israel-and-Palestine was shuffled out of the public eye in the U.S. The George H. W. Bush administration had been perceived as insufficiently pro-Israel and less hawkish than Reagan’s – and criticized as such internally and by the opposition – with the attack on Iraq widely lauded as a way to “get back on the horse.” In other words, restoring the woeful-but-plucky image for Israel and savage-Arabs-America’s-foes image for anyone else. (Hussein soon obligingly and idiotically aided this by suddenly becoming vocally pro-Palestinian, absent any corresponding action, and launching some ineffectual Scuds at Israel.)

Consider: this is exactly between the successful protests in the Deutsche Democratik Republik (our phrase: “the fall of the Berlin Wall”) in late 1989 and the dissolution of the Soviet Union in late 1991. More than one dedicated opinion-maker was determined not only to preserve, but to establish as fixed policy, the Cold War relationship between the U.S. and Israel which had become more explicit and extreme during the Reagan terms. Frankly, this title was one of the very few – likely the only one I can think of written by Americans rather than Brits or Irish – which kept dissenting information front and center, and I use that phrase carefully, meaning genuine information which is treated as dissent.

This was also the height of the Squad in its “semi-costume” phase, in which the characters mostly wore paramilitary gear with a few costume-y touches. The art was frankly amazing. Luke McDonnell’s pencils had steadily become more fluid, more dramatic since he’d started the book, and Karl Kesel’s inks adapted as well – nothing like the fine-line Terry Austin style he used with Byrne, but instead with the kind of shadows and textures I had only seen from Alfredo Alcala. Take a moment to appreciate it in the opening illustration and in this one: 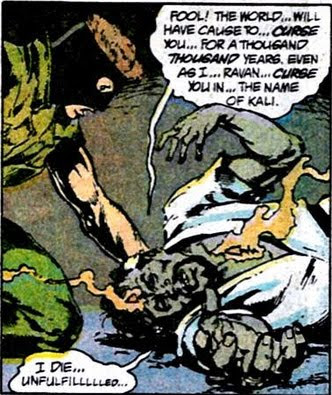 I’m doing this for all of us, you idiot!

Ravan finally got his crack at Kobra, and almost, very almost succeeded, and in fact only failed because a hero refused to help him. As it happens, too, his final curse landed hard on said hero less than two pages later – a bad-ass to the last.

Don’t get me wrong, it was a great ending, the right ending. In fictional justification, you don’t fight a well-written Kobra hand-to-hand and live, even when you’ve trained for doing exactly that all your life. But it was great & right also in pure story terms, because it perfectly squeezes the comics-reader mind (mine) into that exquisite tension between “this was meant to be, this is how he dies” and “oh noes he can’t die, I love him so.”

← At corporate, they just sell paper
Bootin’ the pooch →