The Black Panther(s), the Coal Tiger, and US

Compare him to any other Marvel character who gets to sit on a throne and think about stuff.

BONUS POST: Thanks to Larry Lade and his March pledge at the Doctor Xaos Patreon! All you comics nuts probably already know how Lee and Kirby were developing an African black character called the Coal Tiger in early 1966, then changed the name to the Black Panther.

You might not know that the original name Coal Tiger wasn’t neutral by a long shot, as at the time, it was the media term for post-colonial African nations. The relevant name here is Patrice Lumumba, leader of resistance against the Belgian colonial government, author of Dawn in the Heart of Africa, important participant at the All-African People’s Conference in 1958, advocate for nationalizing the resources of the Congo Basin, then briefly the first prime minister of the Republic of the Congo in 1961. He was soon ousted in a military coup backed by the USA and Belgium, imprisoned, and executed. The nation – called Zaire from 1971 to 1997 – was brutalized for thirty years thereafter by a right-wing military dictatorship presided over (and thieved shamelessly) by Robert Mobutu, who makes a nice matched set with Ferdinand Marcos, Augusto Pinochet, and Francois “Papa Doc” Duvalier.

Not even a little bit shy, dependent, or deferential

There’s considerably more of Lumumba in T’Challa than anyone has ever mentioned, particularly his erudition and the idea of a resource-rich African nation entirely free from colonialism, which controls and develops its own technologies. Lumumba’s legacy spoke directly to both African heritage and economic national empowerment. This is Third Way, Non-Aligned Movement material again: the most frightening thing the U.S. political establishment had ever seen, outside the comfortable bipolar framework that had been cemented in 1948-1952.

An American organization you might not have heard of was US, or the US Organization, written in capitals but not an acronym, founded in southern Calfornia in 1965 by Ron Everett, who changed his name to Ron Karenga, with the title “Maulana.” It was a pan-African movement seeking to recover and re-synthesize African traditions, using Greek-American or Italian-American pride as a model (that’s my example; these were not explicitly named by US). Although sometimes called “separatist,” and directly inspired by many African nationalist leaders’ writings, the idea was to conduct traditions and community activities in an ethnically-rich way, not to move away. The group is also the originator of Kwanzaa and a number of other cultural terms, some widely adopted.

You might have noticed that in the original Star Trek, Lt. Uhura speaks Swahili (“The Man Trap”). That was the language promoted in the U.S. by US, and thus most linked to the concept of black pride and African heritage in the public eye. The episode was filmed in that same summer of 1966. The character’s name is almost certainly based on another US holiday, Uhuru Day, first celebrated early that same year by US.

The political term “black panther” originated with the Lowndes County Freedom Organization, which emerged from the Student Non-Violent Coordinating Committee in late 1965 and was associated with founding member Stokely Carmichael’s book Black Power (1966). The Mississippi group used the black panther as its logo, but the image and term was swiftly picked up by the media in 1966 and was then co-opted by a number of organizations, including two in California, one in Chicago, and one in New York City. But before that, the comics character was introduced: Lee or someone there picked it up from the LCFO logo and media labeling just like others did, assigned it to the Coal Tiger design, and the character appeared in The Fantastic Four a few months before the Oakland organization went public. Considering that Mobutu named himself president-for-life at that time and embarked on a notorious, ongoing reign of butchery, and also that Lumumba’s name was a rallying cry for militant, anti-colonial revolt throughout Africa, it strikes me that in mid-1966, “Black Panther” might even have been chosen as the less threatening name over Coal Tiger. 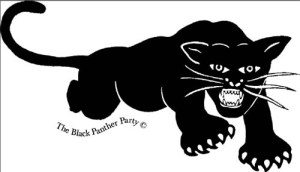 The Black Panther Party for Self-Defense, founded by Huey Newton in Oakland, became the most nationally prominent and formed alliances with the other groups using the name; when Eldridge Cleaver was released from prison in 1968 he accepted Newton’s offer of the position of Minister of Information and took leadership of the New York group. (At the time of this writing, the LCFO Wikipedia entry wrongly calls it the BPP’s “predecessor.”)

The BPP and US began with some accord (they celebrated Uhuru Day together in 1967), but had little in common. Newton’s view was refined Leftist to the core. He applied Franz Fanon’s The Wretched of the Earth to the disenfranchised under-class (Marx’s lumpenproletariat), to which most American black people were relegated – he considered it all to be a form of colonization and emphasized combating discrimination – especially police harassment – as a form of modern class struggle. Contrary to popular belief, blackness as a cultural identity was not a Panther priority, and they built alliances across ethnic lines and within community structures (e.g. food programs at schools). So ideologically, the BPP and US differed greatly, and as it turned out, the FBI’s CoIntelPro was on the job, sabotaging communications between the leaders and according to some, were the real instigators of a Panthers-US gunfight on the UCLA campus in 1969.

The story moves on from there and although US may seem minor compared to the political impact and media presence of the Panthers, quite a lot of its ideas have persisted in black activism and community efforts nationwide. My kids celebrate Kwanzaa in school. Karenga is a university professor and an influential voice, as are many US alumni. 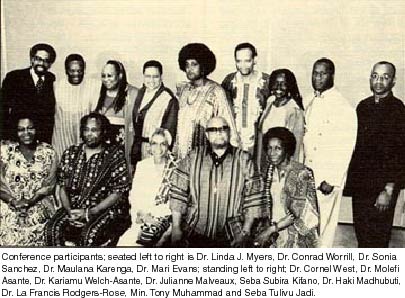 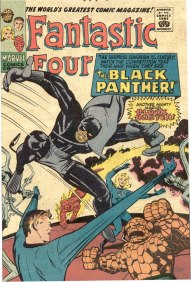 FF #52, the originalversion, which did not; guess why not

FF #52, the version which hit the stands

So to recap, well before the above-mentioned conflicts. the political context for the character’s creation is not the BPP at all, but the coal tiger nations and the US Organization, which in mid-1966 was the most visible new black activist group. It must have been visible to Lee or Kirby or both. T’Challa, Prince of Wakanda, is so spot-on with US ideals of Africa’s heroic past and potential, it’s amazing they hadn’t already started a comic book of their own starring a guy like him. That another group soon used the name “Black Panther” and became more publicly visible is history’s little joke to obscure the content in retrospect.

Again, my take is that this is Lee’s admirable eye for genuinely trenchant politics, and Kirby’s lightning-bolt insight that comics are journalism, all of which deserves more appreciation. The content is more spot-on than anything Life Magazine was portraying, much more challenging to the white mainstream. T’Challa could have been another “Willie” or “Robbie,” the other first named black characters at Marvel, probably because Willie Mays and Jackie Robinson were the two most famous non-threatening but non-servile black people known to white Americans (to be fair, they did threaten a lot of people, heroically so, but not like King or Malcolm X did; also to be fair, Joe/”Robbie” Robertson, introduced a bit later, turned out to be a pretty good character). Or he could have been a waif “rescued” from the colonial stereotype of unspeakably primitive life In Darkest Africa and fully assimilated into Europe or the U.S. Or he could have been a cosmic whackadoo like Galactus or the Watcher, good enough to check off the “black character” box but without any difficulties pertaining to his possible human presence.

The modern accounts I’m reading describe Lee as merely tapping into hip memes with his political content, and as playing right and left against one another, but I don’t think so – you can’t get the 1966 T’Challa without being tuned in better than that, and finding ideals of justifiable pride and existing power to portray that were decidedly not mainstream or soft/centrist liberal white. In foreign policy, the “coal tiger” phenomenon was swiftly cast as creeping global communism, and Mobutu and the government of South Africa were our bold heroes of freedom (if a bit “authoritarian” … you do realize this is sarcasm, I hope). Domestically, the term Black Power was flatly radical in both North and South, as it explicitly broke with the northern-white-friendly “non-violent” terminology from the SNCC. US, like the BPP and the Deacons for Defense, went armed (more accurately, without pretending otherwise). Don’t let all the pretty legislation fool you – this is post-Watts, and the LBJ administration’s support for civil rights stopped with the northern white vote. It had blood in its eye toward any but the most mild and white-led effort. Black Power, for black people, meant being spied on, being beaten, going to prison, and getting murdered. Invoking it in pop media, just a hair short of naming it outright, wasn’t appropriation; it was solidarity.

Was the Black Panther a token? And here I mean the term not as a sole nonwhite face, which he couldn’t help but be, but a fake inclusion intended to smooth things over. Not to be too polite about it, was he a Tom? I don’t think so. The LCFO, US Organization, and BPP had something important in common: neither asking for favors nor settling for a weak win by conceding first. T’Challa wasn’t doing any of that either. He didn’t need redeeming, rescuing, salvaging, uplifting, or educating. This was not a nice-and-comfy center statement in 1966; if you put a black guy as a national leader, a mysterious presence, a sophisticated African, and a decided ass-kicker in there, it wasn’t playing to the gallery. One may make the case that Wakanda is Latveria without the villainy, and arguably, therefore scarier to the reading audience. It means relevance, not in the shallow sense, but being actually relevant.

The question then becomes, how black was T’Challa going to be? The Coal Tiger seems like a remarkably strong, gutsy start. On the published pages, though, there was apparently some early stuttering, maybe that’s why there were two covers, one which displayed his skin color and one which didn’t, and see also this contrast:

To my eyes, the face-reveal at the end of #52 shows signs of last-minute revisions and is a bit hard to interpret.

But in #53, his look is bold, individual, and uncompromised.

Marvel’s history with the issue started strong, but is also full of steps and missteps. In 1969, they stumbled hard with the Falcon who even had a pet hawk if you didn’t grasp the whole Indian-sidekick thing on the first try. Thomas – widely perceived as more political than Lee – was embarrassingly ham-fisted in writing the Panther as a token in the Avengers. Fortunately, not too much later, the Panther’s Rage would come along, as well as another fellow to address the American urban black hero issue. Bet on some posting about these in days to come.

Some thoughts on more recent affairs at the Hudline Entertainment forum