Moses and the Mosquito 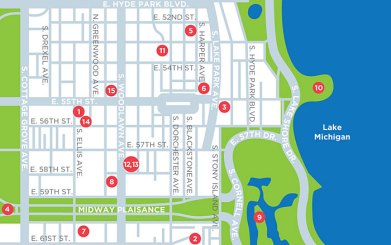 It’s 1985, the summer after my second year in college. I wasn’t “away” at college, I’d moved out from home the moment I graduated high school. Unlike many U of Chicago students but like many others, I’d made Hyde Park my home and become more of a neighborhood guy than a cloistered student. See that oval of streets? That summer I lived just off its southwest corner (Kenwood, just south of 55th). I’d found a pretty good job as a kid-counselor at a local community center, where I’d work until I graduated, part-time during the school year and full-time for three summers. I’d immediately made a good friend there in my co-worker John Hotchkiss, a year older than me, from south Chicago, who’d just graduated from college in Texas. We were excellent with kids, made a picturesque pair at the center, and charmed the hell out of everyone (see photo).

John and me at work.

John was an artist, an athlete, and a comics nut, and he introduced me to his best friend Edd Jones, whom he’d grown up with, also an artist, and who if possible was even more of a Marvel kid than me. Upon learning of my woeful separation from superheroes, they both inundated me with piles of the intervening issues (see The River). We spent tons of time together, in bars, working out, hanging out at my apartment, running around the city, planning for our late 20s. There was no talk of “post-racial” or “I’m not political” back then, and I’m not sure if it’s worth talking about our friendship in those terms, today, or about my neighborhood life in Hyde Park in general. It seems to me to have been a weighty thing to the other people we knew, whether differently from today or not, I don’t know.

Which leads me to finding the 3rd edition of Champions the Super-Hero Roleplaying Game in a local game shop the summer of ’86, and our first game, the one that brought me back to the role-playing hobby, which we played in Chicago, set in Chicago. Hey, I said, you guys ever hear of role-playing games? I immediately enlisted Matt, my best friend at school, as we’d been discussing whether it was really possible to have fun with this activity, and we were embarked. Our characters were completely naive and derivative, with no pretense whatsoever, all the passion of teen reading and of the moment. John instantly built his “himself” character he’d been working on all his life, Moses, and Edd did the same for his, the Mosquito. Similarly inspired, Matt made up a speedy blind sonic flying guy named Soundchaser, and we dubbed the group, uh … well, the Champions, OK?

Bear in mind I was reading all the 1980-85 comics for the first time and was a little bit addled; my ideas and GMing were frankly low on any scale with “good” marked somewhere on it. The story went along with plenty of mess, plenty of trying things out, but nevertheless way fun. We did poke a finger into the eye of the Great White Hope superhero more-or-less at the same time that The Dark Knight Returns and Marshal Law did it. John and Edd had contributed a couple of their own villains as well, so “Ramcharger attacks again!” was often justification enough for a given session.

We did not strategize the game mechanics particularly, operating off pure “I got it!” and then simply building what was in our heads and dialogue. Much Champions play would become a matter of finding mathematical breakpoints and what hedge-funders call “creative accounting,” but we weren’t into that; people who were, and who joined this particular game, either adjusted their expectations or quickly left.

We went hunting other players and found Ed Dunphy, whom I’ve mentioned here before (this is how we met), and a lot of other people played in-and-out over the next year including my girlfriend Maggie, another woman named Kas, and raising the cool factor of the group by a solid quantum, Kristen. For a while we “invited everyone” and ran dozen-person sessions, out at the Point during the summer.

The art! John and Edd drew like other people breathe. Edd was most influenced by Ditko and Miller and John by Kirby and Byrne, but they also constantly refined their styles or experimented, and often inked one another’s pencils. Here’s a piece John did for our game (click please; it looks great resolved):

Oh, the 80s! Animal names! Natural mullets, wherefore have you abandoned us? Dig the short-short cape on Avatar.

The Angel-Wolverine hybrid with the stoner face is Hawk, one of my NPCs, and the costume he’s wearing was John’s innovation because typically the character just stripped down to his jeans for action (a bit of Angel retro there too). I mention this because at the subway station at Chicago O’Hare, between elevator centers 2 and 3, one of the many enormous murals is “The Good Stew,” a two-part, 144-fit Chicago cityscape with all sorts of surreal stuff going on … and over there on the left is a shirtless, jeans-wearing hippie-looking winged guy soaring around. 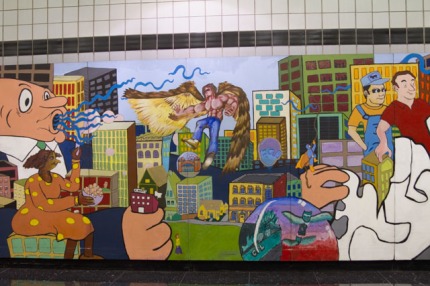 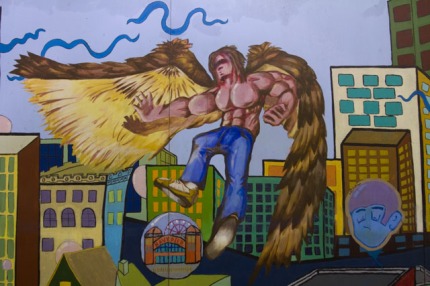 That mural was painted in the mid-1990s. John’s name isn’t on the painted artist list, but such projects usually feature many more people than the official list, and the style looks like his. It’s just possible that our game is living on there.

People become absurdly romantic over the “magic” of their early role-playing, and although I lay claim to original D&D-er status from seven years prior to the events I’m describing, it’s Champions which gets this nostalgia from me. The reason is clear: Dungeons & Dragons did not fulfill my expectations as a long-time reader of myth and fantasy fiction, especially since the people around me in the late 70s treated its material as its own setting rather than as a means to generate one. Whereas early Champions had no setting, and the various textual characters were exceedingly non-canonical, explicitly author-examples, and the equally explicit point was to make your own comics experience. If anything, it implicitly drew upon the Marvel notion that the “world right now” is the setting, and do with it what you will. Remember, this is before the Hero System was fully reconceived as a generic rules-set; I’m not talking about that concept at all, but about this toolbox for making your own comics. It’s absolutely not generic, you can’t get more genre than this. It’s also non-canonical in terms of the author’s own fiction.

A decade later, I was to discover that my love for this very combination had been completely missed by role-playing culture, when I had to explain it from scratch over and over, regarding my game Sorcerer. It’s what I wanted from role-playing the minute I picked up that blue Holmes ’77 D&D, but didn’t find until Champs in the 80s, and literally had to re-invent in my own publications in the late 90s.