A hero shall appear

We do, in fact, need a hero

This is the second Watchmen post, out of an intended three. The first one was Whom were they watching? This one is about protagonists – good guys – heroes – that perennially undefined but unavoidable feature of stories. For the record, I don’t want to distinguish among “anti” and “dark” and whatever-heroes; just put anything that works that way at all into a big box and I’m talking about it.

This post is going to be equally careful to avoid speaking toward the author’s intent or processes. That’s one element of Deconstruction theory that I usually support, what they call “the death of the author,” to avoid getting wrapped up in what he or she intended or did in order to create the content. I don’t think author-focus is necessarily a terrible thing but it happens to be a branch or topic of analysis that simply bores me, and inevitably distracts from the things that don’t.

OK, what I see is is that the twelve-issue series – the only text I’ll be talking about here – undergoes a truly neck-breaking shift in heroic focus just after halfway through. The first part sets up to protagonize the Comedian. That’s really not all that shocking. It’s very mid-twentieth century lit, in fact, to make a loose-cannon, plain-speaking bastard into the hero as experienced by the reader. The Comedian is a rapist, he’s a Vietnam-atrocity-guy, he shot John F. Kennedy, he smokes, he’s rude, and whatever else you want to name. He’s a black-ops CIA/CREEP goon, the very worst thing imaginable from a certain political perspective which to a great extent I think I share with Moore. But the core point of such a story is that unlike everyone else, including those he works for, he’s not deluded or trivial, and so by comparison, and also in the light of Oh My God We Are So Alienated (the natural habitat of said 20th-century lit), he’s heroic. When everyone is blind and stupid and neurotic, the one guy who can speak the ugly truth – because he wades in the ugliness more than anyone – is the hero, or whatever word you care to use.

You’ve read Albert Camus’ The Stranger, right? Didn’t understand it in high school? That’s what I’m talking about. The main character is a prick and he did commit first-degree murder; he’s also the only one who can see how morality relates to life as it is experienced. This sort of thing can be done well, but I’m more interested in its prevalence rather than assessing good or bad. So you know, speaking as a reader, I think it hits a high point in Ken Kesey’s One Flew Over the Cuckoo’s Nest, a genuinely discussable point in Anthony Burgess’ A Clockwork Orange, and a low, even vile point in J. P. Donleavey’s The Ginger Man.

In this first half, the other nominal heroes are flatly no such thing, both in the back-story and in the present. I won’t describe them one by one, but they range from completely deluded and ineffectual, to stifled and inactive, to outright psychotics committing genuine crimes. (Please remember, I’m not referencing the movie or later comics, not even the tiniest bit.)

Awesome, right? Well, yes and no. I’ve been there and done that 1000 times in literature and film already, and I’m speaking here as my 21-year-old self back then. This was my first encounter with fellow comics readers who were blown away by some concept which I thought was done and revised and subverted and resurrected and done again already. I was completely bonkers about Watchmen, poring over every panel and debating over every nuance of the accompanying text pieces with each new issue along with everyone else, but the alleged genius of the story wasn’t my draw, merely its competence.

Then it hits the second half, in which one of the pervert/trivial fake-heroes takes over as protagonist instead, specifically through becoming an actual classical superhero who opposes a clear and dangerous threat through moral determination alone. I’m talking, of course, about Rorschach. He begins as a right-wing, self-righteous, nutbar bully, and then, after he’s busted out of prison, he becomes very different – written differently, revealed differently, and basically a different character.

And this new Rorschach is a good guy, period. Lethal force? Sure, that’s a feature of many good-guys-period throughout the ages and shouldn’t concern the issue here a bit. But his lethal or otherwise vicious use of force is now applied completely differently.

The process of the transition isn’t that sharply demarcated – Rorschach’s running monologue and dialogue is great stuff from the beginning of the series, and at some point he acquires a sense of humor, but in #6, it hits levels of poetry and power which make the Comedian’s “pieces” so far look like the modern-novel boilerplate they are.

OK, stop – skip the material between the two following lines if you are inclined reflexively to defend this title and/or Moore at any provocation. It’s about what I don’t like about the therapy issue and doesn’t have to factor into my main argument.

So issue #6 is the key, right? Yes and no. In general, yes, it is a beautifully scripted and illustrated comics work all on its own. Its specific content, however, includes several absolute headdeskers for me.

I was genuinely too well-educated for it, such that I realized at that moment that Moore didn’t have to be smart as he could possibly strive to be to write this, he only had to be smarter than his concept of a typical late-teen American comics reader. I decided, and I have not seen a reason to change my mind, that he was either a sophomoric writer himself, or he was slumming. (I speak here as an admirer of V for Vendetta, From Hell, and several other works by him, but not the whole ouevre.)

Its only redeeming feature to me at the time, was that the therapist does not become a lunatic serial killer or something, but apparently gains a bit of a spine and at the story’s conclusion, seeks to help others all the more. (Why he doesn’t ditch his incredibly one-dimensional and entirely objectionable wife is another question.)

It was not until thinking about it again that I decided why I like the therapy issue after all, only in the context of the entire work: given the 90-degree swerve in characterization which follows, a retroactive and sympathetic reading of that issue permits me to interpret (or invent) that the therapy actually works: that even as Rorschach recounts his transformation from Kovacs, disdaining the former, Kovacs gets a good look at Rorschach and might not like what he sees. In this reading, Strangely, Rorschach’s lengthy justification of his alienation during the therapy sessions have the opposite effect – it changes his behavior rather than cements it further. This contradicts much of the verbiage about cosmic nihilism, the geek-coolness of becoming an utter bad-ass, and the right-wing vigilantism hard-on (literally) in the issue, so I either have to write off that stuff as Rorschach’s pathology, which he’s identifying in order to slough it off, or simply to accept the issue as a bit of a mess.

The whole story focus changes drastically: (i) the sympathy for the Comedian vanishes, and (ii) so does the right-wing derangement. Also, from this point forward, the Comedian’s role in the story via flashback also shifts in tone, to focus on his relationship with Sally, which is far more positive than it first appeared, and on his hidden affection for his daughter, both of which work against the direction of the first half.

Rorschach’s key scene is confronting his former landlady. To review, this is after the prison break, when he, Dan, and Laurie have figured out that Adrian is behind the various machinations and that they should oppose him. I don’t mind saying that if this were the same Rorschach as in the first half of the story, he’d do something awful to this woman without a moment’s hesitation, probably accompanied by a grim pun, and given what was depicted in issue #6, probably with an extra helping due to identifying her with his own mother. But then he locks gazes with the child she’s holding. 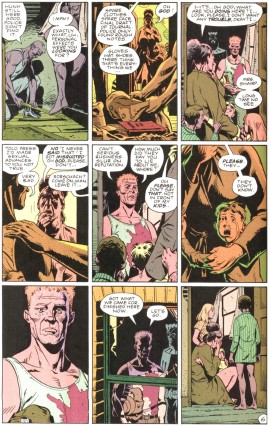 Here’s the difference. This time, he isn’t living inside his head, matching everything he sees to the imprinted traumas and tropes there; he’s looking at real people who have lives of their own, which he is close to destroying. She is not his mother, who would never have held him protectively against any danger. The danger this child faces is not abuse from her, but an over-abundance of knowledge from him, the same knowledge that traumatized him.

(My apologies for the following obvious bits, but, you know, visual medium, words-and-pictures …)

If I’m remembering correctly, after this they learn of Hollis’ death, and Rorschach stops Dan from beating and probably killing the topknot guy who tells him about it. Nor does he bully or harm anyone else, which before this point were almost reflexive, character-identifying acts for him.

To speak from a writer/creator standpoint for a moment, I have no idea whether the larger transition was a matter of initial literary artifice or of a shift in what the artist (Moore) was actually capable of doing with the material he had created. It wouldn’t be the first time a character “refused” to cooperate with his or her original conception, but I don’t know if that happened. Whether you think it’s internally justified via him benefiting from his therapy after all, or being moved by Daniel’s prison rescue attempt, is up to you. What you think Rorschach wearing the Comedian’s button since all the way back in the first issue and not having it in the second half indicates, that’s up to you too. To stay textual only, the story changes from A to B technically only partly successfully – but frankly, I’m glad it does because B is a better story. I think that if the story had continued with a more trivial Rorschach and a focus on the Comedian’s “I’m a bad man but I’ve seen the truth” breakdown, then basically, it would have been an annoying and probably unsuccessful story, based only on the putative ambiguity of Ozymandias’ plan and on the edginess of accepting the Comedian as the hero (well, edgy if one does not read books). However, through whatever process, I dunno, the Comedian is softened into a semi-sympathetic failure, and Ozymandias becomes a real villain in the sense of a real and present threat, with only the tiniest ambiguity about a Greater Good if any.

Not a whole lotta existentialism here.

Ooh, did I say a real villain? (Just say yes for now. Ozymandias’ plan and whether it was “really” villainy is a topic for the upcoming post, as is Doctor Manhattan’s role. Please don’t get distracted by that here.) We all know what that means. It means confronting him is an act of heroism, and as it happens, a hero who is actually and really a hero, who has reconciled his childhood with his manhood, who accepts his own weaknesses and failings, who has given thought to what is right and wrong, who sacrifices himself to oppose the villain, and although in doing this he grieves at the futility of his effort, he is heavily implied at the end to thwart the villain after all. That’s not an existential or dark or Modern or deconstructive or villain-protagonist story at all – it’s a classic heroic Marvel story. Adam Warlock nods approvingly.

So I like and enjoy Watchmen the most because I like the completely standard-superhero story that it became rather than the overly-familiar edgy-lit story it began as.

Next: Today I am a man