The book that wasn’t there 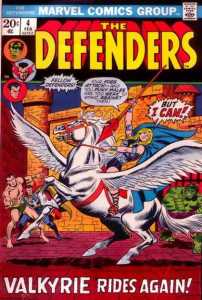 The earliest issue in my inherited stash

Dr. Strange, the Hulk, Namor, and the Silver Surfer? Someone had some balls to propose a super-group with these characters; if they could ever find a common sphere of activity and a collective identity, that’d be the end of super-heroing and super-villaining for anyone else. But that line-up didn’t last past its own set-up, and settled instead into Strange, Valkyrie, and Nighthawk in a sort-of recap of the early Thomas Avengers, with the Hulk showing up frequently.

By any sensible analysis, Defenders should have totally tanked like the Champions did. I loved it to pieces though, and based on my books, conversations, and various internet sites, I guess I wasn’t alone. It didn’t start strong – the so-called Avengers-Defenders war was profoundly stupid – and I’m pretty sure the title was maintained only because at that moment (the Cadence/Landau phase), editorial authority was completely dysfunctional and cancelling titles wasn’t what Marvel was up to. Its whole concept should have been roundfiled after the first joint: that various individuals simply knew one another and kept in touch, and whoever felt like it teamed up for one or another activity, if they felt like it. Members never got tired of explaining this to other characters, sort of the un-group intro speech, which is how I know. I don’t know if it was early PoMo or whatever, or maybe late Dada, but it was a group book about not being a team (really, let me explain again). I don’t remember anyone asking “but whom are you defending, and against whom?” possibly because they didn’t want to hear the explanation again. 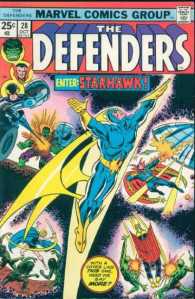 Somehow, various authors kept using the Defenders to finish their stories in, and it weirdly became the place to conclude loose-ended freaky shit that never got resolved in other titles, especially the Avengers and half-done stuff scattered over a half-dozen titles like the Guardians of the Galaxy, plus generating its own oddities that bled out all over the place. It doesn’t surprise me a bit in reading Howe’s account that they had no driving writer plan at all, that someone would write an issue into a corner and then someone else would spitball a resolution more or less in hiding from the editors. I was continually fascinated and baffled by it, as I cared deeply about the characters as nearly real persons, and was reading this stuff going, wait. It’s as if Englehart at least liked the conventions of superhero comics enough to do them, if a bit reflexively, as he did his own thing too, whereas Gerber simply didn’t, and more-or-less plotted as if the heroes weren’t there but were literally added via illustration later.

And yet evident as that was, I would have told you then that it was my favorite title. One thing that kept me on it during say, ages 12-13 was my favorite character Nighthawk, Kyle Richmond, who I reluctantly admit provided no basis for this admiration. The starting idea was all right: a former Squadron Supreme/Sinister member spoofing Batman. The Defenders character is the Sinister version reformed, his Batman references pretty much vanished, and he was now pretty much a rewrite of early Hawkeye with Iron Man-like millionaire trapping. 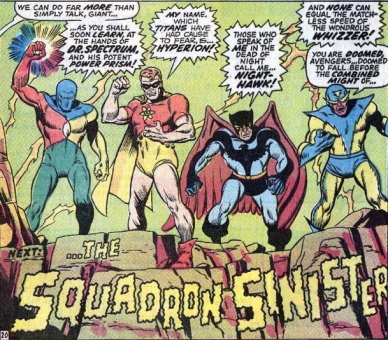 Yes, that is a fake beak on his nose.

He swiftly got a new and impossibly generic costume which makes HeroMachine 0.5 look like a miracle of sophistication – a character only a 12-year-old could love. Someone ought to do a Master’s thesis on those damned buccaneer boots across superhero visuals.

I think this is a later image; that looks like a Byrne jawline to me.

Every kid writes and draws a comic at some point. Mine was about Nighthawk’s brother, Blackhawk!, who drank a potion and got powers & stuff. I drew the panel showing him drinking it with George Perez style geometric-trippy designs in its background. I even designed, dyed, and dressed my Captain Kirk action figure to invent this guy. It broke my heart to learn that “the Blackhawks” were some dumb WWII era group who didn’t even have powers, resurrected on the stands at just this moment obviously to dash my dreams into smoke-stained shards.

The title also featured a consistency which I struggle to explain. Maybe it had to do with the unusual lack of symmetry between (i) the constant interplay with other titles I mentioned above and (ii) the fact that Valkyrie and Nighthawk almost never appeared anywhere but here, so at least as far as they were concerned, this was the one place they’d always and only be. Or maybe because both authors busted out great naturalistic dialogue which contrasted with the stilted way the early Englehart Avengers talked or the generally hysterical way Thomas wrote the Fantastic Four, and especially the by-now weary, too-familiar Spidey patter under Conway.

Under Englehart, one of the best bits came when he cared about the politics, with the right-wing, white-supremacist Christian bad guy organization the Sons of the Serpent, when Richmond discovered that his own money funded the sonsofbitches, with the further twist that Richmond’s black butler was their agent – how much more Batman deconstruction do you need, plus reasonably provocative stuff for a pre-teen. Including why a story about white-supremacist bad guys needed a black villain, but as I say, food for thought. There was more than one “rich hero-guy doesn’t know what’s happening with his money” storyline at Marvel at that time.

When Gerber took over the writing, the internal stories were either always on hold or started and stopped without warning, like Valkyrie’s or rather Barbara’s husband showing up and becoming one of the stronger personalities in the book. In fact, what the hell was Valkyrie all about? I don’t even see her mentioned in retrospectives of 70s superheroines, and I can see why; academe flees from indescribable geometries. I recall her being reasonably effective as a team member, however murky the details are in said memory, and even delivering engaging dialogue, something the Scarlet Witch (for instance) didn’t do. In the interests of disclosure, my pre-teen self recalls one of the more impressive racks in pre-90s comics, which is saying something.  So … is she a deconstruction, straightforwardly but cleanly-missed liberation, an unreconstruction (is that a word?), ironic, or PoMo before her time …? And all that analysis simply fails in the face of the costume change in #40: from black swimsuit + boobcups to slinky gold skintight Vegas hooker? What?

About that dialogue, say what one might about Gerber as a plotter or free-associater or satirist, but at least his characters spoke like humans and responded to one another based on what the other person just said. Reading an issue of the Defenders meant being genuinely engaged with what a given character says to another one, this time, because it would in fact be tied right into what they said last issue and to whatever was going on in this one. Even if the whole story turned out to be blither, and even if at times you wondered why these people having an ordinary conversation were wearing costumes, at least you didn’t get a migraine from the characters’ personal opacity or from their repeating the same old slogans. He had a nice touch with the Hulk, including the “nicknames for everyone” habit (I always looked forward to the Hulk meeting another hero to see what he would call him or her) and balancing the big brute’s need for friends with his general tendency to wander off.

The same goes for the art: it’s funny about Sal Buscema – he was such a workhorse, so solidly consistently just-above-average, that he became enjoyably reliable. Hardly any panel or page differed from any other, that one grimace was the same for every character (he would only be exceeded in this regard by Rob Liefeld), but somehow … it was never bad, there were no slip-ups, no moments that did not work. He could really put together a page, and every so often, he’d bust out something astonishing. I can see why he gained the unfortunate rep as John-lite, but it’s not really fair. I think talking about Kirby and Ditko influences on, say, John Byrne’s art may miss the fact that Sal’s story-telling skills may have been just as strong an influence. I came to rely on him as a reader much as the editors relied on him to meet deadlines. Inkers almost always looked good on him, like a nice solid concrete floor that could hold anything you put on it. Now that I think about it too, this is, I believe, where I first encountered Klaus Janson’s inks. 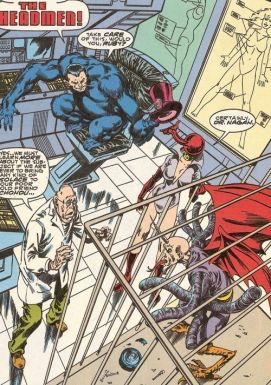 They look sort of familiar.

Without re-reading, I can’t quite place “my” Defenders – it certainly included the Sons of the Serpent, the Nebulon and Bozos sequence, the aforementioned husband, the Headmen and the cockamamie Bambi brain transplant story, but I don’t think I made it past the issue 50 mark. It was probably simply sunk cost which kept in me longer than I might have. I liked Gerber’s politics but for all his surrealistic flamboyance, by the time the book was into the 30s, it seemed inauthentic to me, saying “fuck you” to the material rather than embracing it in Starlin or McGregor style. The elf was the obvious example, and it wasn’t the Headmen’s absurdity that turned me off finally, but what struck me as the obvious upcoming lack of payoff in it.

This was that same time of pure chaos at the editor level as I described in the Champions post, and as it turns out, of maximum personal breakdowns among the writers. Of the individual titles, this was probably the hardest to let go, to admit I was only in it in order to be there “when it gets better.” There’s so much about the Englehart, Gerber, Starlin days that I liked, including a lot of the monster titles (Gerber’s Man-Thing was genuinely disturbing, I loved it), but here, the hybrid with four-color supers just was not flying, and I could literally feel the moment when the heart – however loopy – went out of the writing. I had to decide whether my heart being in it was enough, and it’s not. I think I probably aged a year that single month that I decided not to buy the next issue.

I’ve enjoyed re-reading Avengers, Spider-Man, and others in the course of writing this blog, but I’ve balked at re-reading the Defenders, even to check out the numbers or creator details for the plotlines I mentioned above. That’s why there are so many uh’s and um’s in this post. Nighthawk and Valkyrie live in a protected space in my mind whose details and even nature have faded into obscurity. I’m reluctant to look closer.

Next: Math is not hard