← Math is not hard
Scouse →

Right there in the title 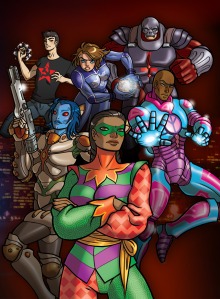 Which is to say, The Astounding Antagonists, by Rafael Chandler, a prose novel published last year (2014). It’s nestled right there with my big beating heart because it’s a completely non-ironic superhero genre book told almost completely from the villains’ point of view.

I’ve known Rafael for a while, ever since he showed up at the Forge with an RPG game draft in hand, which itself would undergo a beating that would kill a Cthulhu python and survive to become first Dread, then renamed Pandemonio. He’s done a thing or two with, what do you call them, video? games? … anyway, those things, which make him vastly more successful and famous than me, i.e., at all, and he’s a celeb in the hobby-game weird-world I inhabit. “Yeah, I know Rafael,” I say casually. “I knew him when his work stank.”

I’ve read a lot of prose versions of superheroes. Some of them are ancient stuff from the 70s that are certainly forgotten by all. There’s Wild Cards which I’ll write about my way sometime, and good ol’ Count Geiger’s Blues. most prose comics stuff is either bad in relying on the poorer motifs of comics (but that’s meta because “comics are dumb!” so you get to be profound instead of, you know, dumb) or too oriented toward commenting on comics while deriving most of their strengths from relying on the better motifs of comic books. I have found very, very few which are genuinely good stories which invoke and utilize comics material as material. (Published mainstream books are probably the thin outer onion skin. I’m certain that enough personal superfic is stuffing spiral-bound notebooks, electric type-written pages, and hard drives out there to fuel the Power Cosmic. I have no intention of investigating.) But of what I’ve read, among the best  are the Four Aces stories by K. C. Ryan, about which more is coming soon here, and this very book by Rafael.

I don’t do reviews. Reviews are an abomination, a violation of the interaction between art and audience, a vile, whitely-swollen pimple on the hairy ass of an unhygienic animal with whom people I don’t like are engaging in unspeakable congress.* This post is not a review. By “best,” I mean my reading experience of books, my life with and without superhero comics to enjoy, and my precious time, and no one else’s. I’ll lend or mention books I like to my friends, which is what I’m doing here, but I don’t recommend a goddam thing, not professionally, not as a way-station between you and the work.

Briefly, the story concerns a full-out effort by the world’s pre-eminent heroes to repurpose an alien satellite for global security. They are really globalized too, meaning the U.S. of A. über alles, with the heroes’ history defining a single vector from 1945 to Homeland Security, as Sacrament and Daisy Cutter have spent almost every day of each intervening week disposing of “security threats” to U.S. interests. Various other heroes include BioTech, PheroMoan, Verdict, and a particularly dysfunctional family including Facet, Cube Girl, and Princess Diamond. They are generally white, pompous, neurotic, and self-righteous to the point of … well, of many comics characters you might recognize.

Our villains, though, is where most of the story is related, especially Motley, a Mexican-American clownish thief, and Doctor Agon, a black, gay genius with at least one personality disorder who invents really terrifying devices. The latter’s former villain group is now mostly dead or comics-dead or scattered to the winds, and the story concerns the emergent team-up of the aforementioned two, Helen Damnation (top marks, villain naming committee!), Coltan, Chillpill and Speedfreak, and Baelphegor, the latter of whom no one who knows Rafael will fail to say, “Yes, yes, I figured that’d be in there.” For the most part, these are the best-realized characters with original and and interesting takes on why they do what they do, and with dialogue that reflects inner conflicts and transitions.

I won’t do a plot summary because it’s a fun read, no point in doing it here. The things I like best are:

It might look as though it’s completely bad rich white people against heroic otherwise-people, with the term “heroes” and “villains” applied respectively only as a conceit, but that’s not quite right. The villains are, generally, not particularly motivated or active toward the public good, or if they are, as with Coltan, it’s not as if they get much chance. They also show really a nice range from emotional train-wreck to genuinely principled – the heroes tend to cluster at the former end, but the villains vary widely. One hero even shifts to villain status without changing in this regard. And crucially, perhaps the most thoroughly not white, not straight, not even powered Dr. Agon is the ur-example of the principled end … and no one would ever mistake him for being a good person.

“Why do you hate him?” [Motley asked]

“I don’t.” Agon slid Cestus back on. His tone was casual as he fiddled with settings. “Sacrament is in control, and has the power to save the world. But the world is a terrible place, and full of misery and abuse. He could change that, but chooses not to, and thwarts me when I try. So he is my enemy and he will be held accountable.”

OK, he’s against “misery and abuse,” but it’s not like he does anything to stop them during the story, and he’s also a sociopath who doesn’t even recognize those rare moments when he’s empathetic, and there is literally nothing he won’t do or unleash to take Sacrament down. Yet he’s amazing. Many characters in the story are in love with or desperately loyal to him, and there is no need to wonder why: because he knows what matters to him and will not, cannot conceive of living except as directed toward it. He’s a lovely example of cynical rationality in service to the purest idealism, invisible even to himself.

Let’s talk about this, because at the moment of this conversation, Motley’s arc is to become principled as well, even realizing her principles. She’s been a clown princess of showy crime for a couple of decades, never really hitting or keeping her gains, in it for the thrills but old enough to wonder what to do next, and working for pennies (and doing a bit of covert security on the side) at a hard-scrabble battered women’s shelter. Throughout a fair amount of the story, despite having become more-or-less the anchor of the new villain team, she’s planning to bail on the others as soon as she can find the chance – until now, when she understands, or rather, comes to agree that it’s all about goals, specifically those based on absolutely nothing but ideas.

It’s a valid point. It’s nailed down hard by Baelphegor, who commits a very horrible murder completely gratuitously as far as he’s concerned, simply to show Motley what it means to believe in what she herself believes. “No one cares except you moonbats,” says Baelphegor dismissively, but … well, I guess it takes an undead blasphemous Satanist nihilist to show you that doing the right thing is the right thing to do. If you read it you’ll see what I mean. So that’s a double whammy against the superficial reading.

Here’s what confuses me, though. Rafael is a noted graphics designer and generally frighteningly artistic guy. What on earth is up with no illustrations? Or comics pages to accompany the text? I know about twenty people who’d fall over themselves to do it, and I can’t believe he doesn’t know at least that many.

Well, no criticism implied. But I for one want to see these characters doin’ comics stuff in comics ways, and I am all about paying someone for it! If you can, and if you want $100 to do a solid two pages of comics action straight from the book’s pages, as discussed by me, let me know. (Email address is at the top right.) First come, first served. Rafael says it’s A-OK with him and even says, he’ll repeat the deal for the second-comer! Cool, huh? [Technical bit: the artist owns the art, and Rafael asks if he can use it in the future.]

Links: Rafael’s homepage (with the Amazon link for buying Antagonists)

← Math is not hard
Scouse →