September is Cosmic Zap month here at Doctor Xaos Comics Madness. Today I’m talking about the heroes of the Zap, and their common concept: hippie Jesus.

Damn it, I have to explain all sorts of things now. OK first: there was a huge, now-forgotten tug-of-war over Jesus from roughly 1967 to 1977 among various coalitions of politicized Christians in the U.S., and importantly, not just for themselves, but regarding how nominal or non-Christians were going to look at it/him. For a while there, it looked as if the anti-war and generally anti-establishment voices had got him – in religious terms, the older-school, so-called Red Jews (the only Old Left which had shifted into the New), and the Unitarians, especially the latter’s organizing skills. This is where finally recognizing/admitting “Jesus was a Jew” came from; it sure as shit didn’t come from the right-wing Christians, who were still knee-deep in the Birchers, or the mainstream churches.

In that light, the Born Again phenomenon needs careful re-examination. A lot of people got into it as an anti-establishment thing, with the long hair and antiwar and intentional communities, and/or in hopes that some kind of “spiritual thing” would be a better path to social change than the bummer-days and apparently fruitless confrontational methods. The battle that eventually landed the Christian Right as the owners of “being Christian” in the U.S. was waged in the counterculture just as in the mainstream. [By 1979 a lot of people who had been very upset about My Lai and the Kent State shootings found themselves fervently and arguably more effectively campaigning for U.S. military superiority against Russia (pronounced just like that, in italics) and talking about abortion-is-murder.] 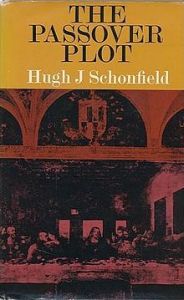 Second, there was this popular book of the 1960s called The Passover Plot by Hugh J. Schonfield, which frankly, isn’t all that great, but it did direct a lot of attention to “what is the plot of this story, anyway,” and at least a look at the historical context however muddled. Its precise details and claims don’t matter much for my purposes, rather that it represented the popular resurgence of the notion that Jesus said and did stuff that was distorted or forgotten by the institutions almost immediately, and that a non-institutional reading could winkle that stuff out. It’s a very attractive, even central idea to the Unitarians and to similarly-inclined intellectual-activists who claim to be secular but for whom “Jesus really said this, not that,” was and is a powerful concept.

I would advise not underestimating such a thing in terms of political organizing or indeed in terms of any media presence at all. The U.S. is not a secular culture and embedding Jesus talk in policy talk, or vice versa, is so normal as possibly to escape notice when it’s you who’re doing it.

Now let me tell you about a late-60s Messiah story done by two Jewish-American guys who – I think anyway – practically embodied that same hard-nosed street-intellectual Left-ish (not “ist”) outlook in the midst of all their stylistic excess and blarney, and who in 1968 or so seem to have thrown all imaginable caution to the winds. I mean, whaddaya gonna say about a story featuring a constructed Messiah called “Him,” who completely defies the institution which seeks to use him? Who holds perhaps the message that yes, humanity is worthy of Galactus one day? Who relinquishes the role expected of him to be the privileged “God guy” in favor of actually benefiting humanity?

(Also chalk up another example of censors’ characteristic stupidity – the Code committee gets hung up on werewolves but lets this go by?!)

Consider 1970, in the thick of the “who was Jesus and what is he now, politically,” after The Passover Plot and before Born Again-ness really took off. Jesus Christ Superstar was not originally a stage or film production at all, but strictly a studio album, in my opinion Weber’s only really good work, with Ian Gillan in the lead vocal part practically inventing the metal scream right there. It’s so eminently stageable, though, that bootleg theater productions immediately sprang up everywhere, leading the owners of the property to get it onto Broadway as quickly as possible, which produced its own soundtrack. This history stresses a certain point: that the lack of spoken passages, the complete lack of staging or other plot-oriented presentation details, and the extensive instrumental passages lays the score wide open for local interpretation per theatrical performance.

1973 brought the movie version which you really should watch all the way through, but here’s probably one of the most successfully ambitious dance numbers ever filmed:

Nor has it lost any power over the years:

I chose that because it’s only one of several similar scenes in which Jesus refuses to play the role other expect of him. Let’s take a look at the plot of Superstar, in part as inevitably influenced by the movie, but as close to the original score as I can manage – which was, incidentally, my childhood listening, that particular version. Quick thing: the story is deliberately ambiguous and weird about all the “special effects” of the Biblical story: there are no miracles, no confirmations of divinity, and arguably, the story makes just as much sense if Jesus is bonkers, or if he’s a principled idealist, as it does if he’s the son of God.

Religious, not-religious, social-idealist, cynic, go ahead and choose. The incontrovertible part is that Jesus simply refuses to play the required part for anyone’s expectation – and lacking all allies, he’s ultimately crushed between competing political forces who wholly agree that they want to get rid of him, and which twist individuals’ emotions to their own ends to make that happen. He maybe wins philosophically:

Pilate: Why do you not speak when I hold your life in my hands? Why do you stay quiet, I don’t believe you understand!

Jesus: You have nothing in your hands. Any power you have comes to you from far beyond. Everything is fixed, and you can’t change it.

But the ultimate point is that instead of some homily or polemic, that this story is a human story of human urges, problems, emotions, and politics. That spoke deeply to a whole generation which unlike mine and yours had encountered only incredibly vague church versions about “the lesson” and unspeakably stupid Hollywood bullshit. It only spoke more clearly insofar as specific metaphysical content was left up for grabs.

Particularly a person who is the very portrait of said generation, Roy Thomas, picking up “Him” for a story that had to be set on an “alternate Earth” possibly because it was so not fucking around. Thomas makes no bones about being directly influenced by JCS, although in that, he was hardly alone, culturally speaking. Here, “Him” becomes more specific, Christianized perhaps as “Him” was definitely more vague and far-future-oriented, the eventual Messiah – but now he is Adam Warlock, right here & now, resurrected by the god-creator of Counter-Earth, the High Evolutionary, with a wonderful early 70s surfer coif. 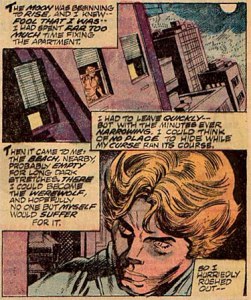 Werewolf by Night: kind of makes you want to sink your fingers in there

Oh that hair! The 70s ideal, pre-established perhaps by Tyree from the Star Trek episode “A Private Little War,” kind of a men’s Farrah Fawcett, destined to become the Sean Cassidy, as observed on K.C. of the Sunshine Band and on legions of pre-teen boys. Argh, to think it would be demeaned into the mullet across the whole culture in a few short years. One can track the full transition into Thomas’ bullpen by the tousled mops on the male characters – I name the guilty men: Gil Kane, Rich Buckler, and the whole Wrightson/Jones/Ploog crowd. Johnny Blaze, Jack Russell, Hawkeye, Tony Stark … only Peter Parker was really hard to blow-dry up from his Ditko/Romita James Dean look, perhaps since his newspaper strip look wasn’t going to budge.

Sorry, distracted by the hair. Back to important stuff like Jesus, specifically classic Space Jesus. In this case, a very intelligent version of this motif, in that instead of a fake “just an alien” guy/deity, Adam is in emotional and political terms completely genuine. The SF trappings neither validate nor invalidate the role and the JCS-similar point of how completely and (to be technical) absurdly horrible it is to be a really good person.

I’m trying to remember the specifics of the plot from forty-year-old reading, but as I recall, it also reverses the JCS point regarding God, who after all in the Counter-Earth story is very much present and accounted for. I can see how someone who understands the opera might fantasize about Jesus coming back at God (as he perceives him) with the same “I’m not your puppet” that he does to everyone else. Warlock’s problems are surely not minor, battling the essence of evil in humanity (oh, is that all) and sure ‘nough, in defying his own creator, it still results in the crucifixion. I’m surprised at how little I recall, although every panel I find via searching is triggering memories … I’ll just have to dig this up somewhere and read it again. I remember it being very big to my thinking at the time. 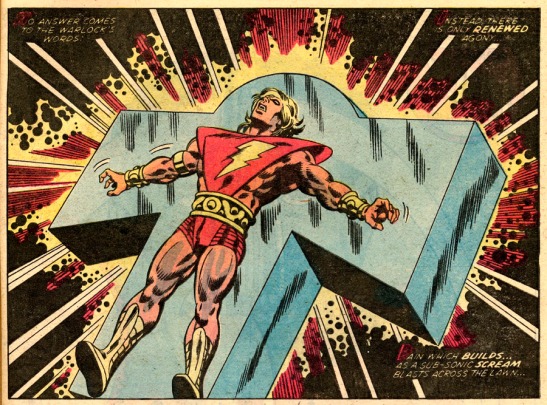 “No answer comes to the Warlock’s words. … only renewed agony”

But even that knockout becomes a setup for Jim Starlin, bringing both the Thomas approach and content directly into trippy politics and gut-revealing personal crisis. Now granted, the specific Messiah/Jesus-ness isn’t the point any more, which is good because Warlock’s done it twice already. But there’s no doubt that the real question of JCS is still front and center:

“You’re far too keen on where and how”

So … yeah. Hippie Space Jesus is the foundation, often strikingly muscular and good-looking. You can find little ones all over the place in comics of the time too, from Godwulf in Deathlok to Woodgod to the editor-aborted “friend” storyline in Ghost Rider.

I’ve lots more to say about Starlin’s first big Marvel appropriation, concerning the way of the peaceful warrior, and of course his story that would emerge for the messiah who asks why. As usual, it seems to be the villains who provide me the anchor for doing that.