← Medium and idiom: they fight crime!
Vee and Vee → 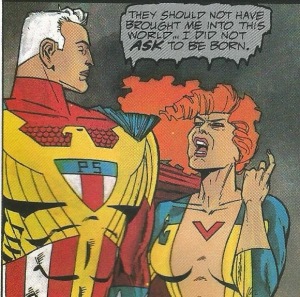 That’s the Sleepman’s voice-over, their son’s

Fourth and last in my series of posts about Marshal Law, specifically the 6-issue original series titled “Fear and Loathing.” The previous posts were Looking for a hero, Back from the Zone, and Unpleasantries. This one is about the villains.

That’s a tad confusing because one of the series’ in-fiction verbal tricks is for the term “hero” to be used for any superpowered person in costume, including psychotic street gangs and general hooligans, but also the semi-celebrity characters who seem to do little harm and little or no good either, like the guests at the wedding. It’s tempting simply to flip that to “villain” so that everyone’s a villain. It’s also easy to get distracted by the later installments mines the ruck and run of “costumed heroes” for parody, placing the concept in contempt and obscuring the more solid villain/hero content in the original story.

Maybe that textual conceit makes my job easier because I’m talking about “villain” in story terms, not the internal setting/fictional vocabulary. The enemy, the bad guys, are scheming evil fuckers who spread misery and destruction with no regard for persons, who know what they’re doing, and relish every second, are hardly costumed at all. That’d be Commissioner McGland, Father Hood, and all such; the ones who until issue #2 have more-or-less convinced Joe that he’s doing the right thing by being “Marshal Law.”

The more direct and literal villains are the outcome of that greater villainy, the messed-up family composed of the Public Spirit, Virago, and the Sleepman. Sleepman is the lesser of them, in a straightforward Freudian story leavened with behaviorism, and the question then isn’t whether that’s dumb or overdone, but whether it’s done well. Danny’s take on that context from within it is also straightforward and presented without need to analyze further. Ultimately his villainy is victimhood, raised and abused literally to become a murder weapon. His identity and very existence are shaped by the older characters intent upon their own drama, including Marshal Law. (To Joe’s credit, he realizes this in #5: as the recruiters and the Public Spirit were to him as a youngster, so he has become to Danny without realizing it.) 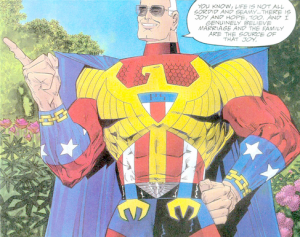 [This point’s related to why Marshal Law isn’t Batman; for one thing, psychologically and idealistically he’s Spider-Man to the letter, but more importantly, if you did get a criminal-thumping vigilante on a leash, and if you did mandate as an author that he be a genuine idealist, then 5-4-3-2-1 you’re going to get a revolutionary. This never happens to Batman and never will.] 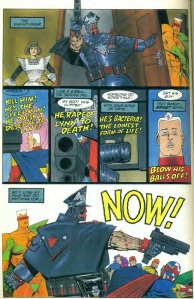 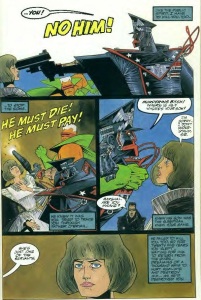 Then there’s his former lover Virago, mother and creator of the Sleepman, who is written with a great deal of charisma, and also presents one of the extremely few examples of flat-out excellent MCI (Mind Control Incident) in comics.

Yes, classically, the hero resists it in the nick of time, but not through bogus “summoning up his will” (or whatever) but by suddenly realizing something. In other words, by doing something ordinary and real rather than opposing a fantasy-component with another one.

It’s really impossible to summarize Vi in two-dimensional terms. Does she love her son or not? Does she miss her former lover or not? She’s become evil for sure – condoning the Sleepman’s rape-and-murder spree at the very least – but there’s nothing gratuitous in her. It all makes perfect sense. And not just confined to her either, but sense in terms of  what the American Dream, identical in 1962 and 1982, has done to the human family. I’m not saying there was some halcyon perfect human family before then, but rather investigating the particular pathology of post-WWII Americana for this subject. ‘Cause that’s where the villainy comes from in this story.

Groups like the Birchers have been hollering about “family values,” “the breakdown of the family” since the middle 1950s; it became a mainstream-conservative battle-cry beginning with Spiro Agnew’s speeches in 1972; and by the mid-80s was taken as an irrefutable fact of modern life regardless of one’s nominal position in various debates. What the soft-left center (liberal, although this actual meaning has been lost) never seems to grasp is that the fury – thoroughly misdirected as it is – is born of helplessness and pain. Not in the hands of speechwriters and campaign managers, but in the response to the phrases – a response whose mobilizing power outweighs any other, even a call to war. In fact, the current dog-whistle response in the U.S. to a call to war is built almost entirely from this other topic – the belief that “the American family” is beleaguered, shattered, betrayed, undermined, broken …

This family image was a shibboleth from the start. Families in the U.S. during the early twentieth-century were like families anywhere else, highly geographically localized, mostly defined by clan identity (clans have never disappeared) and local economics with little concrete contact differing from that found in the vast course of human history. In the post-WWII world, massive policy efforts reinvented the infrastructure of life drastically. 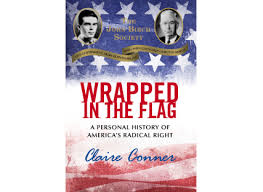 No one knew what a family was supposed to be in the post-WWII world, and right in the midst of these changes, TV and film depictions created a whole image of – not what it was supposed to be – but of what it obviously is. Clan identity is gone, replaced by work identity and property values. First people tried to live the family mythology and then when it failed to exist, they tried to mourn its “loss” – one need only read Claire Conner’s Wrapped in the Flag to see it in miniature before your eyes. It never took. All those fun family-shows on prime time are instructive, treading a fine line between validating the myth and pointing out its faultlines – really, do you think The Honeymooners, Leave it to Beaver, I Love Lucy, et al., are celebrations of family? Not if you actually watch them. The Public Spirit and Virago say precisely what needs saying about some American Golden Age – they’re merely people, with the problems and emotions of people, who try to live up to something which lacks all conceivable authenticity.

What I especially like is that all this topic isn’t merely where the point of the story stops, as if “now you know the backstory, and that’s what you came for.” It’s used instead strictly as context for Joe to realize that he too, has been made into a villain. He’s become an abuser of those like Suicida who are ultimately completely powerless (“powers” or not), a cog in the war machine no less than the Public Spirit, and more personally, a direct contributing cause for the emergence of a genuinely heinous ‘real’ supervillain. One of the best unexplained bits is his reference to his brief hero-career as “the Vet” before accepting the official role of Marshal Law – at the end, it seems clear that he’s about ready to find that role again.

Next: Vee and Vee

← Medium and idiom: they fight crime!
Vee and Vee →