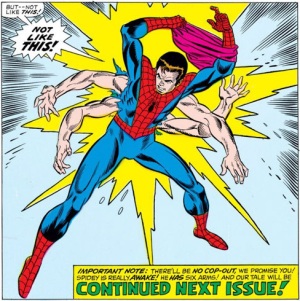 This is the fourth and last post for my series on The Amazing Spider-Man #1-100 as a novel. The previous posts were Today I am a man, Bad guys and bad fathers, and Jackpot, Tiger, with Superhuman endurance, Whoa-oh-oh na na, whoa-oh-oh na na, and Flyin’ high as auxiliaries. I imagine a few more related posts might emerge in time as well.

Here’s how I want you to be looking at this: that no Spider-Man comic ever appeared after #100. No TV show, no comic strip, no nothing. No one wrote it except Lee. It was over. The Goblin arc ends when Norman sees Harry sick and helpless, with the implication that the Goblin is gone forever. The events of the Conway run (the ulcer, Aunt May sick unto death multiple times, the Goblin killing Gwen, Peter sort-of killing the Goblin, the Jackal, the Gwen clone) do not occur.

In that context, the grand horror of the ending matters a lot. That’s the end. It’s not about “how the comic will continue,” so the problem-of-the-month, “how is Peter going to get rid of these arms and keep hiding his Spideyness from Gwen and everyone, because that’s what he does,” is not the prevailing context. It’s not a conflict; it’s a climax, actually of several arcs. They began with whether he can be good at being Spider-Man, whether he can recover from a relatively delayed maturation and become an adult, whether he can find a professional and romantic role in life … and finishing with the question: whether Peter really wants to be Spider-Man. #50 establishes that the origin matters to him, but now that his actual adult life looks like it’s come together, and I maintain that beginning with #33, the Uncle Ben compulsion is resolved, it’s time for a fully adult decision regarding Spider-Man’s place for doing good in the world. And bluntly, that’s pretty hard to nail down.

Let’s talk about that world. It’s not a fictional setting – it’s the world. One of the points I’ll be hitting harder later is that the pre-‘Verse comics weren’t written as a fictional universe, but as happening right in the world in which the authors lived. Diane Linkletter jumped out a window in the pages and media of Spider-Man even though we never see it. You lived down the street from that super-fight you just read even if you never appeared in the panels. During this period, superhero comics weren’t escapist in the larger sense of that word, no matter how gaudy or unrealistic. This is, I think, central to the raw power and beauty of Marvel’s first 20 years (at most) which was drained away into nothing by the mid-80s.

I understood this extremely well as a kid and young adult, and it was a big part of my friendship with John and Edd, the young artists I mentioned in an older post. No comic really did it with as much punch as Spider-Man, for example, when we were talking about how “the black cop” was one of the most important characters. One of the blog readers said at another website, “The FF had the Zap, but Spider-Man had the swing,” and I’m gonna call it the Swing. Obviously that has a lot to do with the social and sexual freedom of its young characters, but more generally, it’s the idea that what you’re reading is set in your real world and will address it with zest.

Huh – that’s not a bad list for the fundamentals of my Marvel – what I think of as the real Marvel, before the Bad Thing happened (see ‘Verse this): the Swing, the Cosmic Zap, and the Scream.

Anyway, what’s crime-fighting and villain-fighting look like for Spider-Man during these issues? It’s changed a lot from that first relatively experimental year, which relied on narrative dodges like following spider-sense signals to “gee there’s trouble over there,” or happening upon some guys in 1940s hoodlum hats robbing a bank.

There’s some topical history here, in that J. Edgar Hoover’s decline in health had permitted the long “Mafia? what Mafia” federal policy to relax, and Italian organized crime had become big news at last. The big cultural moment was The Godfather novel in 1969 (the movie is 1972), by a former magazine writer for Goodman Publications, did you know that? Right down the hall from mid-60s Stan’s office. Cue the Maggia, the Silvermane story, and the father-son Kingpin story, and contrast them with the 20s-and-30s style gangster characters of the earlier years. Doc Ock, too, gets some organized crime retooling.

Along with lawbreakers, Spider-Man also has to deal with law enforcers. I hadn’t recalled that his relationship with the police went as sour as it did this early. I had thought it kicked in hard during the Conway run – but no, bit by bit, during the #70s-100 they get pretty upset with him and treat him as “arrest on sight.” I’m trying to think of any other superhero during this era or earlier who was wanted for questioning in a decidedly hostile way as a part of his life instead of a one-issue misunderstanding.

That point applies to the larger public as well, turning his vague reputation concerns from the first year into a critical context for doing what he’s doing at all. Later, as with Aunt May’s illness, “why won’t they understand me” becomes a leaden weight in the comic, but again, here, I’m talking about a specific development in a single story whose tensions are spiraling both higher and more inward. Jameson is still directly involved in an enlightening way, as the story shifts to show that he is not just a bully or a cynic, but rather a pretty good newspaper guy and especially with Robertson by his side, not a reactionary but a thinking member of the establishment. When it comes to Spider-Man, though, he’s not going to budge, and it’s not played for laughs; the sequence in which Spider-Man confronts him and he literally suffers heart failure isn’t a bit funny. He’s genuinely and irretrievably terrified of this guy. He presents the important lesson that no, you can’t just be virtuous until everyone likes you.

A lot of ink’s been spilled about Peter and politics, and bluntly, I don’t think a lot of people know what they’re looking at, in that this was a confusing time, best described as the middle-ground realizing that nothing they said in the midst of any issue was making sense. Instead of looking at one scene and saying what it means by itself, it’s better to look across several and to see the range of Peter’s interaction and views, as well as each scene’s place in the arcs I’m talking about.

I think it’s much easier to understand when you see Peter as struggling in the grip of his confusions, and the people around him being just as confused, rather than making him a heroic lens who sees things the way “we’re” supposed to.

Also, yeesh, does he get hurt a lot. Credit to Lee and every artist for presenting Dr. Octopus, the Vulture, and the Kingpin as genuinely vicious, dangerous opponents. That opening splash page in #64 of Spider-Man crouching with a useless arm as the Vulture’s shadow looms is a chiller. Keep that in mind as society’s problems loom more and more in the picture rather than dastardly isolated “crooks” – how does getting his arm busted or whatever help to change the world, again? Heroism or masochism?

I was intrigued by the brief amnesia story because for a while, instead of Peter wondering who Spider-Man is, we have Spider-Man wondering who Peter is. It’s not a great story in part due to the intrusion of MCI, but it was a good idea that fit well with the overall conflict. I also think the estimable Hobie Brown a.k.a. The Prowler deserves a closer look in a post of his own.

That final year of issues is where I’m focusing now, as the clash between his anonymous heroism and his responsibility as a person, and those people immediately near him, becomes too much to bear. It seems to me that the current and endlessly repeated construction of “with great power comes great responsibility” tends to overlook that part of things. The best thing about this final push is that for a little bit, it does look as if Peter’s going to make it work: job, Spider-Man, girl, friends, respect.

The central problem is that there are about five or six people Peter should really, really tell, including and maybe not limited to Gwen, Captain Stacy, “Robbie” Robertson, Harry, and Flash. Failing to do so inexorably turns each one difficult and sour, with the exception of Captain Stacy’s death, and his stress keeps twisting tighter.

By the late #90s, the friendships have disintegrated, Captain Stacy has been killed, and Gwen literally doesn’t know if she’s coming or going, and you can’t blame her. Peter’s sense of self, his place in the world, and the danger he’s constantly facing – put all these together, and it yields a dramatic strength to “do I want to be a superhero” in which the franchise hero he became simply does not apply. If that great power brings responsibility that is intolerable and unfair for a single person to bear, then the great power may well have to go. It’s textually valid to read this as a real decision, a final decision.

There’s even a textual precedent and foreshadowing in Curtis Connors, who as I’ve said before, was a way more important character than the latter-day fixation on the Goblin permits.

Yes, Peter, you’re absolutely right. You can’t be Spider-Man and a decent, loving, ordinary person. And yes, you can resolve it. Like this.