And the horse you rode in on

Back in the 70s, I could have sworn this was exactly the case: DC was #1 and Marvel was the up-and-comer; I even remember the month when Marvel’s number of titles exceeded DC’s, when the “We’re #1” fanfare blared, and I was smug about it. In the late 80s, I threw up my hands and cast in with the fancy buggers, and stayed that way through 1990s, hence the reading lists you can find in Justice comes by night and Fill in the blank.

However, I now realize that the entire construct was bunk. The context for the early days, mid-60s through mid-70s, is fascinating, in two variables. First is ownership and distribution: in the early 60s, National Periodical Publications (DC’s real name at that point) owned the method of newsstand distribution. In order to be distributed at all, Goodman Publications (the real company name which published Marvel) had to cut a deal with National that they would not publish more than eight titles at once. This deal was rescinded in the early-mid 70s, and hence the explosion of Marvel titles and the fanfare.

It must have been fun while it lasted

The other variable is ownership and inter-generational editorship. In the late 60s, not only were the grand old men of DC getting old, as of the acquisition of National Periodical, Independent News (which also owned Playboy and Family Circle), and Warner Bros by Kinney National in 1967-69 … and I don’t know many details, there’s a creator labor dispute in there too … Carmine Infantino – unprecedented, as an artist – became art director, then editorial director as of the sale, and in 1971, publisher. Under him, long-working, highly-skilled artists become editors. Young and fierce creators from fandom – and that certainly includes Marvel of the 1963-1968 vintage – bombed into DC and were, if you will, running the asylum for a few years.You’ll recognize them, old and new (at the time): Dick Giordano, Gil Kane, Marv Wolfman, Len Wein, Steve Englehart, Denny O’Neil, Jim Shooter, Mike Friedrich, and Neal Adams are among the most famous; don’t miss out on Steve Skeates and Cary Bates if you’ve never heard of them. Think about the comics of that exact time, ~1971, and you’ll see it. Oh yes, and two guys named Steve Ditko and Jack Kirby, granted extensive artistic freedom. In 1975, corporate sanity was restored at DC and the famous Jenette Kahn replaced Infantino, who was bumped out of admin entirely.

Throughout these years, too, even as Kirby and Ditko were now working at DC, a number of younger creators steadily moved over to Marvel, in tandem with certain ownership shifts there (when Sheldon Feinberg took over Cadence Industries) and with all the new Marvel titles flaring up too. The names list is impressive, including Giordano, Bob Brown, Archie Goodwin, Kane, Englehart, Shooter, Wolfman, Wein, Adams, and Frank Robbins. The back-and-forth between the companies never stopped: in the late-late 70s and early 80s, O’Neil and Walt Simonson “went over” from DC to Marvel, even as Wein and Wolfman “went back,” and soon, Marvel-bred George Perez, John Byrne, and Frank Miller went to DC too.

In other words, regarding creative personnel, the two companies were always fermenting back and forth. The beloved image of DC vs. Marvel as two armed camps matching Cold War style Manichean ideologies is a myth. I’m glad to know this, but I’m also just that wee bit sad for my pre-teen self who thrilled to one of the many DC-Marvel hero fights conducted via deliberately-badly disguised versions of the “off-brand” characters. Readers are probably thinking of the Legion vs. X-Men in the latter’s #107, but my favorite comes from a bit before that, in Avengers 140-149. I think it’s more significant than merely an industry in-joke.

One does not summarize Englehart Avengers story arcs easily. OK … part of this story included the wrap-up of the immense Kang(s) plot(s) I talked about in Time travel trippin’ up, and I’ll write about that including Hawkeye’s nipples some other time. The second part concerned the rotten-to-the-core Brand Corporation and its collusion via the Serpent Crown with the powerful government of an alternate-Earth. This other Earth, you see, featured the triumph of the military-industrial complex, the American Way, and the ascent of Nelson Rockefeller to the presidency. (That detail, incidentally, was not parody – this comic was scripted just before or during or just after Nelly keeled over in dubious company in real life, and he was the Republican front-runner way ahead of George H. W. Bush and the laughably-impossible dark horse candidate Ronald Reagan.)

OK, so, comics-wise, this other Earth’s primary super-team is these guys: 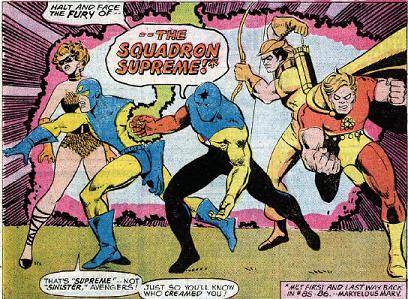 They also included Amphibion, Cap’n Hawk, and Tom Thumb, the latter being a particularly insensitive take-off on a person’s biological size. Did I mention that these issues, excepting a couple fill-ins, are illustrated by none other than a very young George Perez? [Confusions regarding Supreme-Sinister are largely avoiding by ignoring the character Nighthawk.]

They are very very clear about their current relationship to said military-industrial complex:

The Whizzer: In case you’re still in the dark, Iron Jaws, I’ll put it in words of one syllable — we sold out!

Please understand, as I totally did at the time clutching my newsstand purchases, that this is not about powers vs. powers. That shit didn’t interest me even a little; I knew even back then that victory and defeat in superhero fights were strictly a matter of ephemeral plot needs. The text spoke to me directly, in bits and pieces throughout issue by issue, that here we were talking about ‘heroes’ who had willingly become lackeys to power, and who disgusted the Avengers beyond measure.

Englehart’s Avengers, at this point, are the solar-powered environmental Iron Man, the question-the-security-apparatus Captain America, the dope-smokin’ Beast, the quintessential transgressive lovers Wanda and the Vision, and the newly female-empowered Hellcat, who gets to kick Amphibion in the balls when he tried to put the make on her. Yes, the Squadron initially whomps them good, but the issues to follow include some satisfying retaliatory beatdowns (granted, Perez was involved), including the iconic Vision-stomps-Superman sequence.

Well, OK, a bit about the powers. The Squadron wields considerable force; for at least four members, pound-for-pound, any one of their powers outmatches any one of an Avenger’s. However, each time, the latter characters’ quickness of wits, and ability to twist a variable or to go outside expectations, wins the day. The Squadron just hits; the Avengers have to think. (with the proviso that the plot says so too, so there)

But this is the real victory, right here: 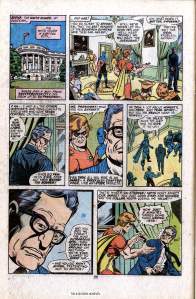 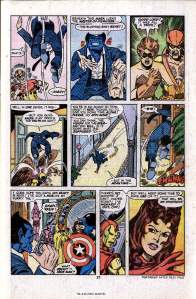 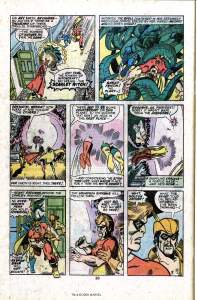 Yeah. Englehart’s Avengers – and this was his final storyline on the title – are saying fuck you and the horse you rode in on to the establishment, patriotic, status quo supporting superhero team. Or bluntly, to DC as it generally stood, hippie Green Arrow (for a bit there) notwithstanding.

This is what I’m always on about: that superhero comics at their best are not some fictional universe in which “powers work” with its own alt-history and internal physics. They are about the real world and comment directly upon it in no uncertain terms. Watergate and the end of the Vietnam War fell upon my life like hammerblows, not through the headlines, but via impact and action within my own family. These comics spoke directly to me, were written for me, about exactly that.

If you’re still not gettin’ it, consider the other example I mentioned, the Legion reference in X-Men #107. It’s pure squee; there’s nothing meaningful there except for fan excitement at seeing the Legion in a Marvel book, and enjoying the self-referential fun Dave Cockrum was having with Timber Wolf / Fang / Wolverine. It’s empty.

Note: I relied heavily on Will Jacobs and Gerard Jones’ The Comic Book Heroes and Sean Howe’s Marvel Comics: The Untold Story for the corporate back-story in this post, but it’s hard to suss out DC history, and any errors here are mine.

Next: Vigilantes R Us