I’d like to learn more about the ~1980 transfer of personnel from Marvel to DC, many of them returning. The one thing I’m certain of is that the breakout hit which put DC back on the map, The New Teen Titans by Marv Wolfman and George Perez, could only have been produced by people who’d thrown everything they had into mid-late 70s Marvel and formed very definite notions there. [Also – a moment here to acknowledge inker-and-finisher Romeo Tanghal, the guy who actually had to give us all the doohickeys on Cyborg’s outfit and the glowies on that golden lasso … I imagine he’s in a nice home now, poor fellow … just kidding, but man, that was some serious labor.]

What was “DC” at this moment anyway? It’s before the Brits arrived, before The Dark Knight Returns, before Crisis on Infinite Earths. Its only real asset was the recent landmark movie hit with Superman. There was no “universe,”and no editorial management of content at all. You had a variety of franchises each with its own diversity of generational interpretations, and a bunch of quirky little islands: the JLA, Superfriends (not to be discounted), the Legion, the New Gods, the stand-out intensity of the early 70s Batman and Green Arrow, the Doom Patrol, the Fawcett characters, soon the Charlton characters too. The content was much like what Roy Thomas must have seen around 1967, looking back over the unused 1940s and 1950s holdings of Goodman Publications. But under a much more ROI-inclined, oversight-heavy, better-connected to visual media, and campaign-oriented management.

I can imagine, for instance, Marv Wolfman looking it over and saying, “Shit, we can get this mess together and sell it as a Thing,” such that The New Teen Titans was more than just a new supergroup title, it was a redefinition of everything that it touched, including its reference to other characters. It wrote about relationships among the disconnected DC characters as if those relationships already existed, and as if people already cared. It was the nucleus of a new principle, that now we can write ongoing stories here with characters you can follow from book to book. If the rival company had rocketed to apparent “dominance” via Make Mine Marvel, well, DC would counter with Make Mine Marvel Too.

By saying that Batman and Robin had a beef of some kind, it established the beef as something that mattered.

It’s the college dorm book. They’re separated from their parent figures, they have ostensibly different identities and varying values (especially about sex), they are mostly all the same underneath, they’re thrown together for reasons which seem sound and inevitable but are not precisely clear or trustworthy, they have to live together in some strange designated building, the adult world doesn’t really consider them responsible, and they have to “be a team.”

Some will thrive, meaning, find a functioning identity different from their parents’, and some will succumb, meaning, not manage to break away and melting down.

To some – I’m thinking specifically of Jones & Jacobs’ The Comic Book Heroes – this was the X-Men done right, and I can see why. In the long run, even by 1980-81, X-Men as a plot or character study could only be described as hysterical. Sameness aside, what Titans definitely did not do was flipflop and wander and get obsessed with the latest trivia. The characters may have been neurotic but they stayed comfortably in their assigned diagnoses instead of suddenly changing directions as if they’d been demonically possessed. In a way, it was what Shooter kept trying to establish at Marvel and kept not getting. Each plot was introduced, developed issue by issue, and resolved. You had your shadowy figure + hints; reveal of who; reveal of why; all as the “plot” thickens and then it’s a thumping fight. Keep enough of these going in layers and the readers will love it unconditionally. You knew exactly what was going on, and what happened last issue was always picked up in the next.

Bad Ron rips free and snarls: As long as you don’t mind that what was going on was banal to the point of shrieking – the depth of Barbie dolls, immense reliance on mind control and misunderstandings, and when in doubt, idiot plotting —

OK, OK, solid head-shake, let’s stay positive. I just re-read the first couple years’ issues, and the almost entirely absurd origin team-up moment aside, it started a lot stronger than I remembered. Robin is written to be unequivocally competent. Both Cyborg and Raven start with some resonance and their dad-stories are credibly moving and semi-scary, respectively. I can deal with Changeling as long as I simply disconnect the whole thing from the original Doom Patrol. I thought the campfire heart-to-heart sequence was well-timed and justified. It’s simple but it’s also solid.

But then … see, all right, take Cyborg. First there’s the economic thing – the comic says outright that “most of the Titans are well-off,” and bear in mind his parents are top-flight research scientists which in comics means wealthy, but he inexplicably lives in grim and poverty-stricken “bad New York” because (um) that’s what black people do. I guess. But never mind that; my real interest is how he has to carry multiple character concepts on his one pair of shoulders. Is he the anti-intellectual jock as he cast himself as he grew up; or the nerdy scientist kid who only acts bad-ass street, as it seems to go in the first year (and is a really good concept, pretty much Ben Grimm); or is he ipso facto streetwise and gang-tough just because he’s black (which is pretty much where they go with it); is he the most mature of the bunch (actually justified in a couple of issues) or the most unpredictably angry and incidentally useless … it’s too much to work with and it all kind of blends into, if you’ll excuse the expression, mocha.

All the politics in the book are like that. Whether it’s brief conservative-vs.-liberal rhetoric among the team, or Soviet heroes being uncommunicative and tragic, or crazy-Ay-rab terrrorists, or whatever on earth was supposed to be going on with the runaways … it has a TV special, calm/middle center for the reader to adopt comfortably, which never admits to genuinely opposing views and never shifts.

Bad Ron could be really nasty about the later interminable stories concerning Terra/Tara and Raven, especially since the whole parents can be really bad theme is thoroughly delivered by the first year’s end. But most comics suffer from fatigue and if I forgive the ones I like most, it’s not fair to crank about others. My concern is this mocha thing that runs throughout … everything.

I am a total sucker for these two. And they were right, too, why bother fighting Titans? 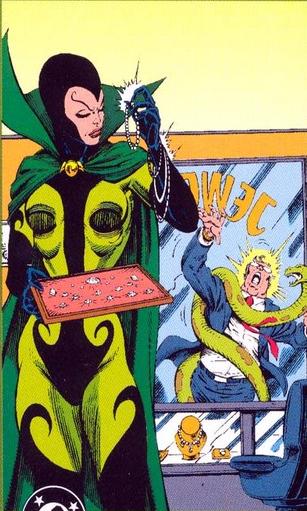 I think I just remembered something I had to do.

Especially, the villains. I can’t even count how many good starts there were – Mammoth and Shimmer, Phobia, Psimon … and yet each spun into triviality. The book just could not seem to get a handle on what villains were “about” – they were either on the quirky-to-insane spectrum, or cosmically obsessive, usually literally. Not a one of them had a credible perspective on anything, with Brother Blood as both perfect and yet perfectly bland version of No one joins a cult. I was always underwhelmed by Deathstroke the Terminator (possibly because I started with Perez’s Taskmaster a few years earlier), but I also know I’m in the small minority on that one. Never mind Raven’s stupid parents, both of whom are completely crazy and completely uninteresting. I wanted more Phobia – how can you name a villainness that, and see Perez draw her like that, and not go to town with it?

Villains are always the key to a comic’s authenticity about the real world, and their curious emptiness expands to all aspects of the title. Oddly for a “teen” book, it was deeply lacking in the Swing. The romances were all present but also tepid; “love” seemed like a common cold you caught and sort of suffered from. Interestingly, although I don’t like the Zionist politics of the New X-Men, the book had politics, and with that plus the in-your-face lust and love firing off constantly, from 1977 through maybe 1985, Claremont gave it Swing to burn. Its plotting was frenetic and forgetful, but I found it simply more fun to read than the Titans, whose professional and reliable nature begin to look sterile to me after only a few issues, let alone fifty. Bad Ron even gets grumpy about the art and starts talking about Gil Kane and direction-of-motion lines.

I hope you see my point, that we are talking about whether this title is fantastic or mere plastic. I can articulate the latter better because Bad Ron is probably the real me, but I see both. How about you?

Next: A pretty butterfly