← The raw and real deal
Super, thanks for asking → 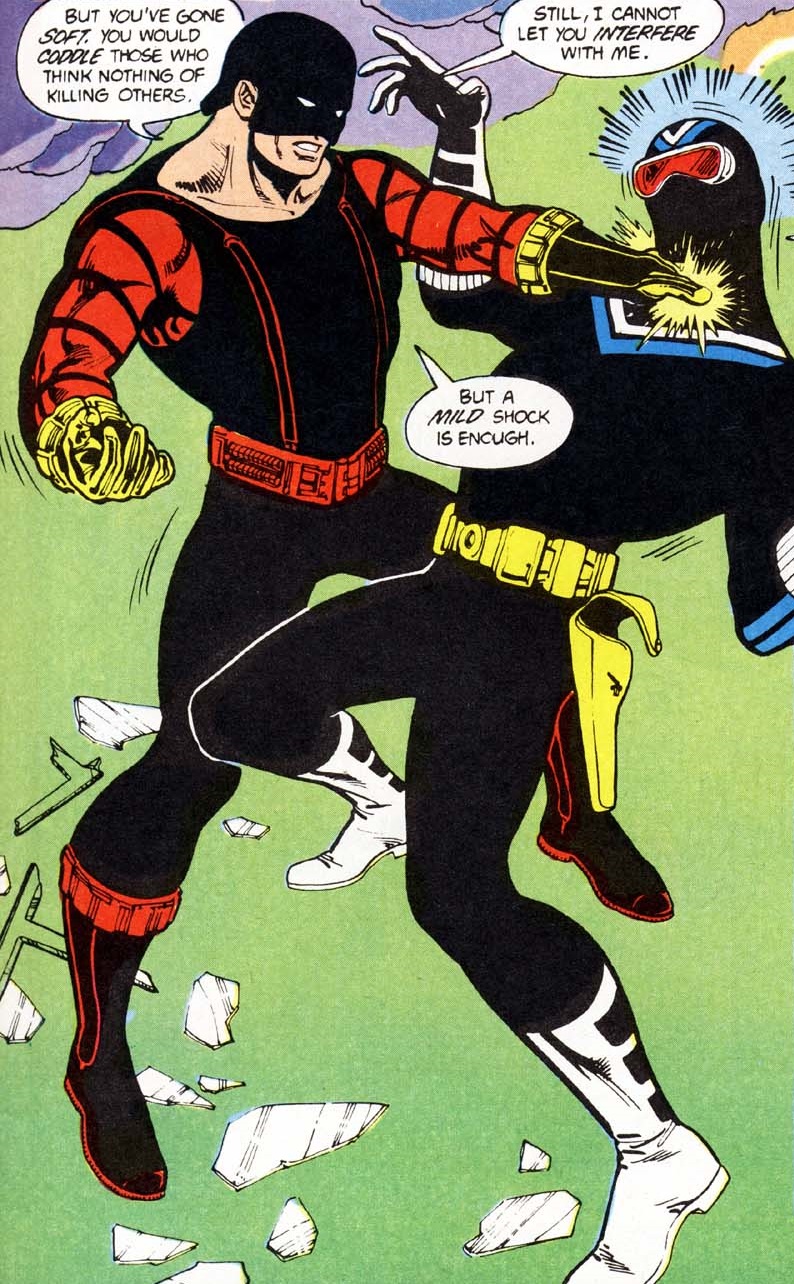 What happens when the vigilant gaze falls upon vigilant actions? Wait, that’s supposed to be in Latin … In this post, Steve Long takes it away for the guy who’s maybe named a bit too literally for what he does.

Our tag-team author vigilante series to date includes: Eat hot lead, comics reader, What was the question again?, The Big Bang, Wicked good, Vigilantes R Us, In Darkest Knight, The not so secret cabal, A pretty butterfly, and Jet and silver. Huh. That’s a pretty damn good series.

Caveat: this blog is about the first 50 issues of the original Vigilante comic book. I have no idea what’s been done with the character since the mid to late Eighties. 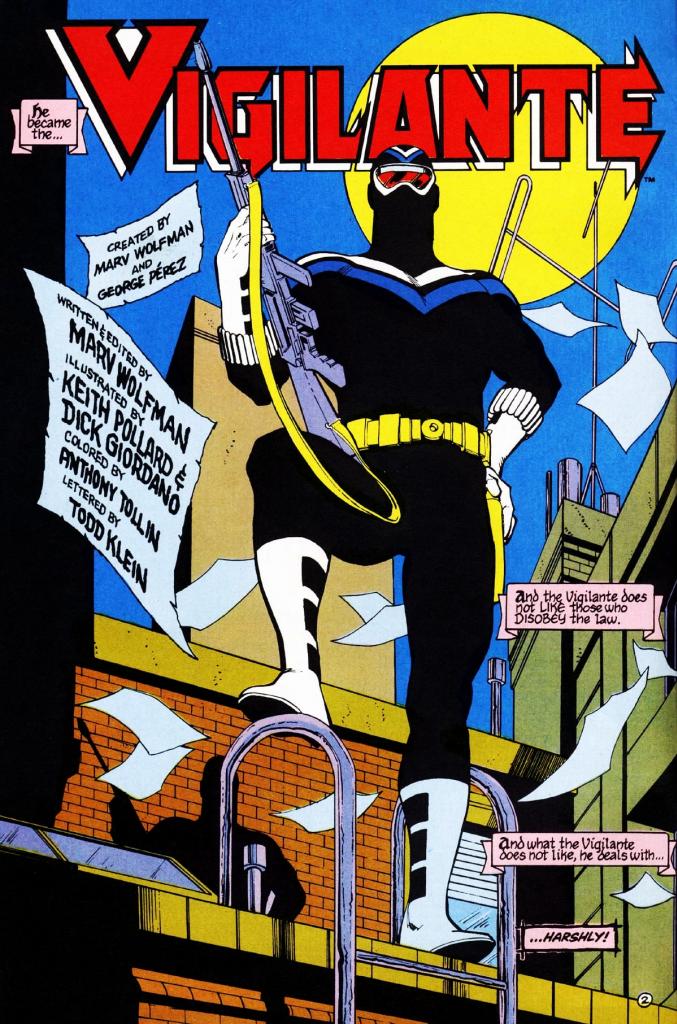 Way back when I attended college, I’d walk or drive to the local comics store (conveniently located near campus) every week to get my comics. One that I followed regularly, and remember enjoying, was Vigilante, written over the fifty issue run I still own first by the character’s creator, Marv Wolfman, and later by Paul Kupperberg.

To prepare to write this column, I went back and read those fifty issues for the first time in over twenty years, and I have to wonder: what the hell was I thinking back then? Did all those poli-sci courses somehow temporarily damage my brain? These comics are awful. The writing, at best mediocre, never truly engages me (not even the two-part guest story by Alan Moore); the characters are (for the most part) shallow and uninteresting; the art’s erratic and often just plain bad. I guess I was easier to please back in my salad days.

The crux of my dislike of the book, I think, is the erratic nature of the main character, Adrian Chase, the Vigilante. (Put in a lot of time thinking up your nom du crimefighting, huh, Adrian?) He is one of the most indecisive, confused, mixed-up characters I’ve ever encountered. He waffles back and forth between one viewpoint or another, again and again — sometimes within the confines of a single issue:

I want to carry a gun and shoot criminal scum! Hold on, it’s wrong for me to kill anyone… but I think I’ll still carry this revolver. I really shouldn’t kill people, but this one guy really deserves it! Forget this crap, I’m not only going to kill every criminal I can, but cops and anyone else who gets in my way!

I don’t want to be a judge. No, hold the phone, I wanna be a judge!

I’m brimming with self-assuredness. Now I’m questioning everything I do.

To make matters worse, his abilities (other than his power to heal rapidly) get pretty short shrift. He’s a world-class marksman… who only carries a revolver and often misses what he shoots at. He’s a highly trained hand-to-hand combatant… who constantly gets the crap beaten out of him by ordinary thugs. His training montage shows him picking up an enormous boulder… and his superhuman strength never comes up again. (Nor does the mysterious cabal of ghosts who taught him his fighting skills, including his frequent “I throw my nunchaku as a missile weapon!” attack. I’m not making this up, I swear.)

By the time Vigilante finally succumbs to the inevitable and puts a bullet in his brain in #50, all I can think is: couldn’t you have done this twenty or thirty issues ago as a kindness to your readers?

But I can complain about bad comics anytime (and do). This is part of our series of blogs on comic book vigilantism, and the otherwise worth ignoring Vigilante has one thing that makes him worth discussing in this context: his villains.

All of Vigilante’s most notable, long-term adversaries are themselves vigilantes — but unlike him, they’re sure of themselves and their mission:

Despite the absurdities and inconsistencies throughout the series, I think I can sense a solid theme in all of this. I believe Wolfman and Kupperberg were trying to tell a story about how being a vigilante affects a person psychologically. They attempted to do this partly by showing his internal agonies, and partly by contrasting him to “villainous” vigilantes who don’t question what they do. Rather than chronicle a character like the Punisher, who guns down thousands without suffering any mental ill effects, they wanted Vigilante’s actions and decisions to torment him (however justified they might have been).

Now, that is a story worth telling — one a comic book, in the right hands, could portray to excellent effect. The problem is that they go about it so ham-handedly that it becomes ridiculous. Adrian Chase isn’t layered and complex; he’s a whiny schmuck who can’t make up his own mind and stick to it.

I blame the costume on George Perez, who, despite more virtues as a comics artist than one can name without running out of blog space, did swing hard to the Lycra + racing stripes in costume design. Vigilante wasn’t alone on those fine powder slopes.

I missed the whole durn thing due to annoyance with “gun, shoots criminals” characters, and even in that context it seems logical to find the do-I-or-don’t-I version more annoying than the eat-hot-lead version. It’s hard to feel that moral ambivalence yourself when the hero is feeling it already to the point of wangst. Steve, you just took 50 issues for the vigilante blogging team, and I salute you.

The question, and I guess it really is the question: given your acknowledgment that reading Punisher: War Zone today showed it to be less than excellent, what about that series rates it a fond memory rather than a “what was I thinking?“ as with Vigilante? What, in the cold light of day, is the difference between them? Not between the characters as such, that’s easy (neither is “layered and complex”), but rather, the two titles, in terms of punch?

Or to put it a little differently, do you think you could write the story or sequence of stories which ends with the Punisher, through the exigencies and vicissitudes of circumstances, completely understandably, killing himself? For reals, I mean, no comics resurrection, no coming back ever.

STEVE’S RESPONSE:  …I KNEW HIM, HORATIO…

Those are some excellent questions. Let me see if I can come up with some good answers.

In terms of why I still like the Punisher, I can think of a couple of reasons. First, I have a much deeper well of nostalgic love for the Punisher, one that’s validated for older me by the fact that going back and reading some of those stories — such as the ones we focused on in our earlier blogs — remains fun. I still love that character and the stories told about him, even if the quality of the narratives didn’t always hold up once he has to support his own book. To put it simply: there are some great Punisher stories, and plenty of OK ones, but there aren’t any memorable Vigilante stories.

Second, whether the stories are well-written or mediocre the Punisher himself is pretty consistently depicted across dozens of books, multiple titles, and numerous authors. So my aggravation at Adrian Chase’s waffling doesn’t apply.

I could write the sort of Punisher story you describe — in fact I was contemplating just that last night after watching a couple more episodes of season 2 of Daredevil on Netflix. I see him as more likely to go down fighting, or succumb to his wounds just as he destroys one final Mafia family or drug cartel. But the Punisher’s always been at least creeping toward the edge of oblivion, if not standing tiptoe upon it. The fatalism with which Conway, Wein, and other writers infused his early dialogue shows us that, if nothing else. It would take a lot, but he could reach the point where despair at realizing he can never have a meaningful, lasting impact on the underworld, or his longing for his family, send him spiraling down to the point where he at long last, bloody and profoundly tired, gives up.

Next: Super, thanks for asking

← The raw and real deal
Super, thanks for asking →