← Super, thanks for asking
Missed! Ran out! Dang! Unnhh! → 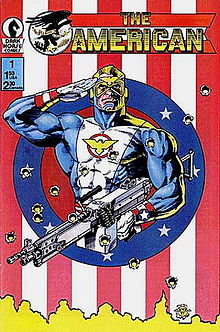 Politics and autobio sing a duet in this post! This title was central to my big dive back into comics, in the flush of First, Comico, Eclipse, and specifically Dark Horse, itself on the heels of the now long-forgotten “black and white boom.” Autobiographically, it’s the same period I wrote about a bit in The orgasm that saved the world and Who is Coyote.

The American appeared in eight issues from 1987-88, part of Dark Horse’s big wave of brand-new comics (The Mark, Black Cross, Concrete …); it was written by Mark Verheiden and initially illustrated by Chris Warner. It purported to be rebooting a forgotten 60s hero from an ancient crap comic, or rather, that was the tongue-in-cheek opening intro. I wrote a letter which I’d intended  to be funny in-kind, praising the character’s resurrection, and which they apparently took for sincere (and probably thought I was an idiot), later issuing an extensive explanation that the character was entirely originally fictional. To be fair, I had written it a little ambiguously in case maybe the story was true. [Huh! Just reviewed my old copies. I had totally forgotten that Stan Lee had written a letter to the book, printed in the same issue as one of mine.] 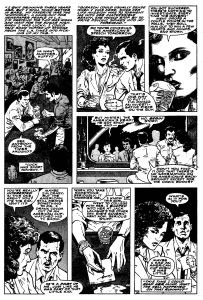 The first four issues are nightmarishly good. It’s everything you could want from an indictment of U.S. executive-privilege culture, from the supers-comics stuff concerning the bank of replaceable Americans to the real-world hilarious nod to the legendary dislike between Dwight Eisenhower and Richard Nixon. It touches especially well on the idealism/submission balance at the heart of the Captain America concept, and which the latter character rarely manages to confront (see Against the Establishment). There’s occasional black comedy which borders on outright savagery, acceptable partly because the narrating journalist character is so jaded and miserable that his dark commentary can be understood as his POV. The net effect is thoughtful and saddening.

And to my own jaded, miserable, and savage gratitude, it’s a gorgeous Iran-Contra scandal artifact, published practically from the headlines in the best sense of that term. It showed me that real comics still lived – that’s why I started buying the things again at all.

The four-issue opening story was its only story, as the later issues struggled between drama, self-reference, and comedy and the title fell apart in an obvious bout of upcoming cancellation. It was followed by a few one-off specials and disappeared. The editorial pages in later issues claimed that the Iran-Contra content was innocent happenstance, they’d always intended the series to be plain comedy, they’d written it all ahead of time, and life was merely imitating art, to which I respond, “The news on the matter broke in 1986,” “Your bad-girl secretary character quotes Fawn Hall,” and, “Yank the other one.”

Iran-what, you say? This little thing in the middle of the second Reagan term. I wrote about it in detail in my book and game Shahida, from which I’ve extracted this excerpt, which itself includes the following diagram:

The point is that it wasn’t a scandal, it was blatant criminal action. It also bypassed party loyalty because the administration was waving its “never talk to Iran” banner at the same time it was doing all this dealing with them, and because the contras were odious to anyone who cast a single glance at them. Put the justice system into play entirely as it was written, nothing special or extra, and (i) Reagan and Bush would be criminally impeached and then charged, (ii) quite a bit of the rest of the administration and some of the CIA would go to prison; and (iii) if the cocaine connection were included, quite a bit of the War on Drugs would disappear. The edifice of national security going all the way back to 1947 looked fair to be dismantled.

Domestically, this was the actual historical moment of the dissolution of the Republican Party, following its blow-up doll inflation via the Christian Right after the Nixon era and walking-corpse-rampage during the Reagan administration, and just preceding the takeover of its content and policies by the Democratic Leadership Council, itself replacing the Democratic Party (don’t tell me you’ve forgotten that too). Everything nominally Republican since has been nothing but foreign support for Nixonian leftovers, who uneasily ride a base of populist anger which they stoke for votes and constantly betray. All this did happen but under cover. This is what happened visibly:

But screw both the DLC and the GOP. This is all about me. Iran-Contra was uniquely important to me because of a fellow named Shafi, an Iranian student who lived with us during my childhood, and a remarkably excellent person. This was in the early 1970s – I grew up knowing more about the Shah and American oil than adults in my country outside the State Department. In 1979 he went to Iran to join the revolution against the Shah … wait up. You may not know that the Iranian Revolution was an unusual case of a middle-class revolt, and that the religious component was initially a minor player; Shafi was a perfect example of the reformist, professional class that opposed the Shah. The mosques had, however, become the only socially-organizing network during the regime (SAVAK was uniquely concerned vs. communists, who were thin on the ground), and were therefore very effective when Khomeini returned from France to see what he could squeeze from the situation (and lucked onto  an unplanned hostage card, but that’s another story). Anyway, once Khomeini’s party achieved local political dominance due to defying the U.S. most stridently with said hostages, one of the first things they did was line up the unwanted overly-secular types who’d aided the revolution and shoot them. Shafi was one.

From anticipating a much-needed bloodbath, I then watched in astonishment as first, the entire thing was obfuscated by Oliver North sniffling into the flag, and then even more so as everyone completely forgot about the real possibility that the entire White House could have ended up in jail except for something something America something Alzheimer’s. The pardons slammed the door shut on it and no one mentioned anything again. The ensuing frenzy of retroactive and entirely fictional justification of Reagan-era foreign policy has obscured it completely, and to this day, “Reagan brought down the USSR” is a staple of American mythology.

It stunned me into an apolitical haze. I went through the fall of the Berlin Wall, Gulf War I, and the dissolution of the Soviet Union with shrugs and sour grunts. I watched U.S. discourse get retooled into the irrelevant clubs currently called “conservative” and “liberal” with grim contempt and no small puzzlement at the willful stupidity in both cases; and I correctly predicted we’d see the worst of U.S. Cold War policy unleashed rather than rendered “unnecessary,” just as the commies had always said.

I will save the tale about how I came back from the cold in 2006 or so, and continue with Iran-Contra in comics.

The next story of interest comes from Suicide Squad #59-62 in the very early 1990s, in the midst of that same frenzy, against which this story stood as the sole dissenting voice. Specifically, against the pardon and associated disappearance of the investigation. The title was now in its most feisty phase featuring the Squad well off the government leash, enjoying the hell out of the collapse of the Soviet Union and the effect on the Red Shadows, and generally showing espionage agencies running around being confused and extreme in order to disguise their own irrelevance.

I will write another time about how John retooled the Jihad from a bunch of Ay-rab loonies out of a Golan Globus flick into a more pointed critique of U.S. policy; I bring it up here because this story is well along that vector. It’s gutsy as hell, culminating in a classic multi-agency hero-villain pileup due to explicit Iran-Contra type machinations including an expy of North (below, at lower right) who even references his real-life model by name.

Squad vs. Hayoth vs. Justice League vs. Jihad while the scumbag gets away

There’s a tricky thing at work here: it’s not the standard action-flick thriller plot about a rogue agent running around causing havoc; in fact, invoking precisely that cliche is how North managed to deflect all the attention onto him and why pardoning North made the whole thing go away. For this story to hit – which it does in both examples I’m writing about – the jerkoff guy is merely a window into what the whole structure is accomplishing, “it’s the System, man.” His lone-wolf status is an illusion; he might even believe it (the creep in Suicide Squad calls it “initiative”), or his associates might even believe it, going so far as to decry the guy’s terribleness (Eisenhower in The American romanticizes his era’s decency and sportsmanship), but the story ultimately pegs the framework in which he operates, his designated authority, as the real problem.

And I don’t see enough of that story.

Next: Missed! Ran out! Dang! Unnhh!

← Super, thanks for asking
Missed! Ran out! Dang! Unnhh! →