This was my favorite character in the exact mid-1970s, age 12-13. Why? That’s a question that gets more interesting the more I try to answer, and also less and less easy to answer, because I like him right now too, with no shred of nostalgia or ruefulness or snark. And there’s nothing I can point to. After posting a little bit about him in my Defenders post, The book that wasn’t there, I discovered this is not some wholly individual quirk. Readers of that post have been telling me they do too, and they can’t say why either. A recent promo of the article I link to at the end of this post prompted massive positive public response, characterized by exactly the same vague and non-ironic approval and even love for the guy, without one single reference to anything to approve of or to love.

I’m beginning truly to enjoy the cockamamie improv and co-opting and general nonsense that battered new characters into shape from about 1968 through 1976. Nighthawk, or Kyle Richmond, is a perfect example, beginning as the Batman expy in the Squadron Supreme/Sinister during the late 1960s … “rich man,” get it? Who seems to have captured the creators’ imagination to become the Squadron member who escapes that particular self-referential motif that would develop for years, e.g. the events I wrote about it in And the horse you rode in on. In that story, Nighthawk didn’t appear at all, having become “hey, let’s do something with this guy in a real title” instead.

His turn from alternate-world villain came in the Defenders, which is where my experience with him picks up, initially in his absurd eyesore of a Squadron outfit, looking like this:

He soon lost almost all the Batman schtick, retaining only the secretive rich guy component, getting a gaudy costume instead of his somber original, and no longer lurking and crouching around in favor of a more avian high-flying motif. The stiff cape and the elongated mask were still Batman-ish but eventually shifted over to a more traditional look, finally thank God dispensing with any nasal appurtenance, which Bowen captured nicely in the statue I led with. The cape always kept a bit of that opera-curtain effect.

Significantly, he took over the team-member role that Hawkeye held in the Avengers of that era: the crook gone thoroughly straight, with just a touch of the nonconformist or ex-“whatever” about him; the hot-head or at least mouthy; and the not very successful womanizer. He’s generally calmer though, without tantrums. Here’s what I said about him in the post I linked to above:

… my favorite character Nighthawk, Kyle Richmond, who I reluctantly admit provided no basis for this admiration. The starting idea was all right: a former Squadron Supreme/Sinister member spoofing Batman. The Defenders character is the Sinister version reformed, his Batman references pretty much vanished, and he was now pretty much a rewrite of early Hawkeye with Iron Man-like millionaire trapping.

He swiftly got a new and impossibly generic costume which makes HeroMachine 0.5 look like a miracle of sophistication – a character only a 12-year-old could love. Someone ought to do a Master’s thesis on those damned buccaneer boots across superhero visuals.

Every kid writes and draws a comic at some point. Mine was about Nighthawk’s brother, Blackhawk!, who drank a potion and got powers & stuff. I drew the panel showing him drinking it with George Perez style geometric-trippy designs in its background. I even designed, dyed, and dressed my Captain Kirk action figure to invent this guy. It broke my heart to learn that “the Blackhawks” were some dumb WWII era group who didn’t even have powers, resurrected on the stands at just this moment obviously to dash my dreams into smoke-stained shards.

You may either be missing the self-mocking elements of that account or be nodding in agreement. The unspoken understanding for the latter is that Nighthawk was an oddly ineffective super-team member to the point of complete irrelevance. Granted, kickass supers action was not a Gerber feature anyway, as his Defenders tended to stand around talking about … stuff, unaccountably in costume. I try to avoid all hero-justification argument regarding “cool powers,” because I really think that’s a red herring, but it must be said that Nighthawk was singularly undistinguished therein. The perfect contrast is Hawkeye from the same era, who was surprisingly able to pull his weight among very-super and cosmically-powered other Avengers without absurd author favoritism. The other perfect contrast is the Angel in any title ever, who at first glance is exactly like Nighthawk – affluent white guy flies around, accomplishes little, spouts opinions with little merit, pretty much only there to get knocked out of his flight pattern by energy bolts – but is an incomparably annoying load at all times. 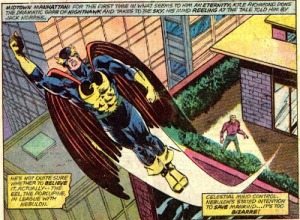 Yet … I still like him. What is going on? It may be a matter of negatives.

For example, I now find it rather refreshing that he’s not obsessed, tormented, hunted, cursed, aggrieved, neurotic, or anything like that. He’s not a kid or an alien or automatically alienated in any fashion. He doesn’t even have an issue with the secret identity; early on he casually outs himself to the other Defenders in phrasing which underscores how trivial a concern that is (especially when you find your fortune is funding a white-supremacist group). He’s a surprisingly un-Marvel hero for someone who practically embodies the nostalgia for Marvel of 1976 or so.

H’mmm … maybe this is making sense. He’s not a primary/title hero, so he doesn’t have to be yanked around to do stuff or run into problems on the street at a higher-than-average rate. In other words, although there is no driving plot associated with him, there’s none of the lazy and aggravating bullshit which writers use to cover up for having no plot or to pad out one that merits only 6 pages out of 22.

The publishing side of it matters too, so he’s not a startup with a title with or without showcase first, like the Ghost Rider or Nova or Black Goliath; he was a group character and stayed that way. Like the Vision except without the tendency for the android’s particular trauma of the moment taking over the book all the time.

Yet he didn’t become a throwaway either. Could it be that as in his early role as the reforming villain, he’d already had his major moral moment, and it was so concluded, so done, that it’s not like any question remained of how heroic he was? Yet I can’t say that mattered to me as a reader, as at the time, I didn’t know the Squadron background very well if at all. He seemed merely solid, “there,” to the point that I didn’t even have to see him prove it to believe it. Odd as hell, considering how many heroes were unjustifiably thrust in our faces, “see how heroic he is? see? see?” without success, the aforementioned Nova being an excellent example.

This is the heroic corollary to my discussion in Second-best villainy – but for the villains, the status comes from being rich in potential that happens to be written badly most of the time, whereas here, it’s a curious emptiness which – maybe? -says, “something could be done with this,” but also says, “let’s not mess with this.”

I think I’m feeling this question out, maybe posing some solutions, but not quite there. Someone else want to try?

Links: A kettle of Nighthawks, Diversions of the Groovy Kind

Next: Justice is served!