Actually … hero? Maybe anti-hero, but no … OK, protagonist? I’m not even sure about that. I’m not saying Shulz wasn’t an artistic marvel, as he obviously was, but count me among the “geez, Peanuts is fucked-up!” audience. I’ve been in that sector ever since reading it in the funnies, among my earliest reading materials at age 4. I kept reading it in part because one simply didn’t not read Peanuts, and in part because it was reinforced constantly via collections lying around everywhere, and certainly because my age group was the one directly targeted by the animated version. (Fun me fact: You’re Not Elected, Charlie Brown aired  in 1972, when I was about the age of the kids in the story, and considering the mock Nixon-McGovern election we ran in 2nd grade, at that exact moment, it taught me everything I needed to know about democracy.) 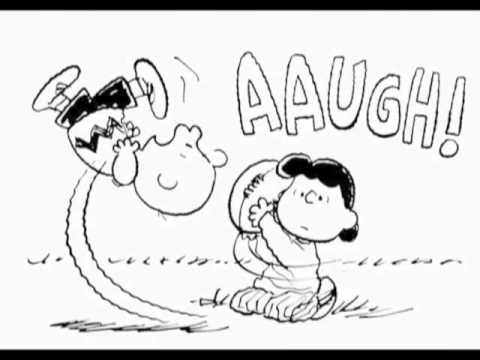 I only followed it at all because the stuff I liked was frequent enough – Linus’ irrepressible equanimity, Snoopy’s daft (deft?) release of any grip on reality, and Schroeder’s completely rational decision to focus on something important. But I couldn’t stand the way the kids treated one another, and Charlie Brown’s self-defeating qualities were so patently pathological I wanted to run off; the whole “laugh through the pain” thing wore thin fast. By the time some of my peers got to the point of teen suicide, I swore off reading it indefinitely.

However, investigation on this topic has been done and done again; I have nothing to add. My interest here lies in two comics, each by an unspeakably skilled writer-illustrator, which indubitably take a reader’s experience with Peanuts and turn it into something new, providing enough commentary to matter but not fearing to go where the new thoughts will. And both rely on the concept that Charlie Brown’s value as a character lies in connecting the reader, possibly involuntarily, with the misery of the human experience and to a confrontation with the existential void.

Sure it is. Just hold this football!

Paul Chadwick’s Concrete began in 1986 and might fairly be called Dark Horse’s breakout “we are legit art” comics moment. Ron Lithgow’s brain now resides in a big stony body, and he lives a new life in which personal satisfaction slips into and out of his grasp.

As culture commentary, it’s justly famous – look at the government’s solution to the revelation that alien life exists and abductions occur. They saturate the marketplace with Concrete over-hype and paraphernalia, specifically to bore the public and make him a joke, thus flooding and removing any genuine interest in the topic. The title is full of stuff like this. Every issue offers its own treatise on modern existence which outdoes academic philosophy and sociology by a light-year.

Ron, or rather Concrete, romanticizes historical “iron men” like Richard Burton, and he seeks to enjoy his new life via his new capabilities. Every story trades off among his success or failure in doing this or in helping with some social endeavor, his moments of heroism or discovery that go unnoticed, and the small personal tragedies that fill the lives of those around him. That last matters: the single consistent story element is everyone else’s ongoing failure to connect with or understand the environment, society, and people around them. Triumphs – like when Concrete helps conceal the body of the farmer killed by his family – are only ever about finding brief ways to cope. His core insight is that the human sense of belonging that had always missed him in his back-story is missing in everyone else too, right now, and has always been so.

I bet I’m shocking the Concrete fan right now. No, no! The whole book is deeply humanistic and idealistic – it’s based on sympathy for him as a person, responding to his intense empathy, and respecting his capacity for insight. Hasn’t everyone been calling it the gentlest title in comics for thirty years? It must be!

But I say hogwash. Ron was miserable and fully suicidal, not borderline, before his abduction and transformation. Not once does he long for a return to normality. His powerful insights and occasional moments of peace are only possible because his sexuality and general experience of “the human flesh” are now absent or transmuted into forms that no human can contact. He suffers when he tries to connect either with other people or with the physical world around him, then sighs and briefly re-achieves repose when he accepts detachment. No one else, not even his closest friends who genuinely love him, can experience his feelings and insights – only the reader. Like Charlie Brown, when Concrete sighs (and it’s the same sigh, for the same reasons, every time), he sighs alone.

Cut to 15 years later and Weapon Brown, by some lunatic named Jason Yungbluth, at first easily mistaken for a cheap cash-in upon a familiar pop culture image translated into an equally familiar and badly shopworn apocalyptic setting … but look again. Unlike Concrete, it’s a much more literal and referential translation of the Shulz character – bringing all the locked-down seething force of it into glorious dark action. Subtle it ain’t.

I’m restraining myself from raving about the incredible parodies and re-imaginings of 100+ years’ worth of newspaper comics characters that fill the title, which show that Yungbluth isn’t only a Mad Magazine veteran, he’s a brilliant one. He doesn’t just make fun of them, he nails them, with and without love and sometimes both. Readers of the title will know what an effort it takes not to identify and spend a whole post on the eventual primary antagonist, but I really want to focus on the leading man and not on anyone else.

This time it’s not the sigh, it’s the Aaugh! rendered (incredibly) as moving as it could possibly be even though the character has embraced utter nihilism and a vicious satisfaction that the world is as thoroughly vile as he always knew it to be. There’s genius in that. Brown doesn’t even like killing and fucking. Even the license afforded him by the utter destruction of normal society around him isn’t enough to compensate for the messed-up wreck a few years of ordinary pre-apocalypse childhood had left him. His despair at facing the void can always be felt again, no matter how much scar tissue has built up since the last time.

Concrete and Weapon Brown mean a lot to me, actually much more so in combination than as separate titles. They share the original foundation of unflinching tenacity when standing outside of social inclusion, knowing that this very inclusion is the engine of human affairs and yet wholly a chimera, knowing how it has inflicted terrible pain not only upon oneself but equally upon those who purport to have it, and knowing that nothing you can do or say will convince others to let it go. It’s about not wanting it. Both the serene, “desert and stars” perspective in Concrete and the cold, grinning hatred in Weapon Brown were embedded deep in my life-experience by age 18; I am pretty certain that lacking these led straight to the fate of the real-life Charlie Browns I once knew before they saw that age.

Next: We got this