I just want to talk to him 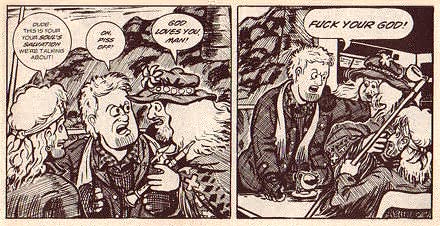 Today’s about two comics published simultaneously in the mid-late 1990s, both of which I bought start to finish and for which I own the full runs. Each concerns going to find God and have a little talk. With a bullet.

You’ve seen this premise in plenty of other comics or other media too, of course. My reader’s or viewer’s perception is that creators express a lot of passion or attention to this need for dialogue – it shows that no one would possibly write it without buying into it somehow.

Disclosure: this story-subject isn’t in my zone in any medium, as I don’t possess the tools to make the tools to fathom that task, nor do I grasp any concept underlying the concept of the task in the first place. I lack any sense of purposeful meaning at all for things, stuff, people, time & space, existence, et cetera, and since I didn’t have to rebel out of anything to arrive there … stories of this kind only work for me insofar as the characters’ other motivations and the situations they face are intrinsically compelling.

Re: the two titles I want to talk about here, you’d be pressed to find a greater contrast in publishing and pop culture status. One’s a big-budget showcase, permitted and lauded for a degree of explicit humor not previously seen in mainstream U.S. comics, a smash hit, a fan fave to this day, and now having reached its pop apotheosis on TV. The other’s the only multi-issue full-size comics work from a self-published creator who specializes in small-press autobiography and can say and show whatever he feels like. Some of his work was showcased at Fantagraphics for five issues, and neither that nor the six-issue title from Aeon Publications I’m talking about here are kept in print, or as far as I can tell, receive sufficient critical, historical, or reader attention.

Both stories feature the aforementioned road trip to confront and as it turns out to kill God, a war between Heaven and Hell, distinctly personalized and characterized angels and demons, a jaundiced view of modern politics, a bad-ass grim-and-wry protagonist who’s not sure what he believes in any more, unstopping potty-mouth action worse than me which is saying something, gruesome violence followed by more gruesome violence, and truckloads of naked tits. There, the resemblance stops.

If it looks like an action movie, that’s because that’s all it is

I don’t usually indulge in flat declarations of quality at this blog, so brace yourself for an exception: Preacher (1995-2000) has not aged well for me, after losing my interest at just after the halfway point and upon re-reads thereafter. I won’t go so far as to call it a wretched piece of shit, but I can see that designation from here, and I definitely think it is everything abysmally stupid about the 1990s in one spot.

… no pacing at all, perfectly-centered lobotomized post-Reagan politics, covers always off-model for main characters’ faces, overkill strictly on acceptable targets, bare-faced plagiarism like a cow pissing on a flat rock, Mary Sue hero, faux “tough women,” mysteriously disappearing backgrounds, no inking worth the name, black comedy limited only to faceless goons and feebs … cough! Did I start typing madly like a pissed-off caffeinated comics blogger? Will walk around a bit now. Remember that Arse-Face is actually pretty funny in the right kind of awful way.

OK, my only relevant criticism is that the religious content is empty. It doesn’t work as a slam on religion, specific or general, because what the religious or theological characters are-and-do resembles nothing real, not even as parody. You’d think a designated Irish Pogues left-ish bad boy could bring some serious Church-ass critique into this, but no – it’s all stock Hollywood, and the angel-demon hybrid that starts the story turns out to have zip, zero content. In other words, the alleged classic wicked-funny piss-take on religion fails to be blasphemous even a little, so all it is, is an action movie running on one-note emotional cues.

Look, people in a situation (that’s Norman on the left)

Colin Upton’s Buddha on the Road, via MU Press/Aeon Publications 1996-1997, is a work of genuine physical beauty, intelligent and topical humor, uncompromising focused rage, utterly efficient story-telling, and unforgettable impact. There’s no movie-thinking underpinning its content at all. Norman, the protagonist, is a former Toronto punk who joined the Army and served in Bosnia, now returned full of uncompromising alienation but significantly, no angst. He’s completely believable as a human weapon. When someone else recognizes that better than he does, and he’s landed with a literal contract to kill God, it’s not like he believes it’s real or knows that he should do it, but he knows why he might.

Regarding the most relevant point, the story is packed with contempt, rage, and disgust at a specific brand of religion – and it draws on informed, historical critique of a precise era of Christianity. Therefore the doctrine, the devils, the rhetoric, and all other details are completely grounded, not just in a historically geeky way, but so that they make internal sense and represent ideas that led to actual things happening. When Norman, and by extension the story’s theme, are “mad at God,” it’s not vague, and it’s not a straw target.

I think I caught myself before blowing 5,000 words on why Preacher isn’t actually offensive, only barely and rarely “crossing the line twice,” so you’ll just have to imagine it as I say, “by contrast,” Buddha on the Road doesn’t mind being offensive all over the place in a deceptively mellow way. The demons don’t wear clothes, so never mind tits, it’s cock-and-balls and bush-and-lips all over, and no one thinks twice about it, me as reader included. Throwaway goons’ heads blown off? Pssh, that’s not shocking; try a saint proudly displaying her severed breasts on a tray and explaining why that’s awesome. Here’s the visual thing that nails it: Upton’s style isn’t what this description might imply; it’s nothing like Crumb or Wilson. His art is more in the zone of Alison Bechdel and Jason Lutes, with the content prioritizing intimate, changing, heartfelt human interaction. Especially given the story’s naturalistic beginning, as well as the deep-focus backgrounds and inky blacks, the real shocker is how normal the excess feels once one is way, way past the chance of recoiling.

Meaning, loves himself, that’s for sure.

But here’s the important thing: theologically, or theoretically, however you want to phrase it, these two very different stories define the Big God Guy exactly the same: a total asshole. And the point of the final conversation isn’t a conversation at all, but to kill him.

It’s not merely the Deist notion of “went fishing,” as I like to call it – the God who provided a starting-point and then wandered off. No, this God is an actively attention-demanding, responsibility-denying, hair-trigger psychopath, who isolates himself in combined arrogance and terror, and for whom all other beings are subject both to his snap judgment and slightest whim.

Characteristically, Preacher‘s version begins with a tease and gets less interesting with each encounter, whereas the war-on-Heaven situation in Buddha on the Road gets more complex step by step, until at the climax Norman is faced with real decisions. But the similarity in the divine characterization is rock-solid, and so is the necessary conclusion: “Talk to him? There’s no talking to this guy. All he needs is killing.”

And that’s weird, isn’t it? You’d think, if an author buys into the “let’s find God and talk” premise enough even to write it, then he or she would make the capitalized character at least interesting enough to converse with. Right?

That’s the key. Let’s get literary to use it. H. G. Wells was born in 1866, right into the Anglican Low Church’s dedicated push to terrify middle-class children via especially nasty depictions of Hell. From his 1934 autobiography:

… one night I had a dream of Hell so preposterous that it blasted that undesirable resort out of my mind forever. In an old number of Chambers Journal I had read of the punishment of breaking a man on the wheel. The horror of it got into my dreams and there was Our Father in a particularly malignant phase, busy basting a poor sinner rotating slowly over a fire built under the wheel. I saw no Devil in the vision, my mind in its simplicity went straight to the responsible fountain head. That dream pursued me into the day time. Never had I hated God so intensely.

And then suddenly the light broke through to me and I knew this God was a lie.

Three points here. First is the intensity of hell-nastiness that many children have been subjected to across a wide variety of faiths. Second, that young Herbert was bright enough to see that the Satan, Devil, whoever, character is a mere middleman. (Both Preacher and Buddha on the Road hammer this same point hard and accurately.) Third, Wells immediately walks away from it, later to think up a concept he’s happier with (see his God and the Invisible King).

It’s that last one that matters – it’s what seems not to happen in many cases, probably because the indoctrination is too strong. In these two comics, and in other works like them, the creative urge hasn’t walked away and the hate is white-hot. The authors apparently want to stay in there and fight.

It is … well, I’ll go onto a speculative limb here, with yet more help from the 19th century. You know the joke about John Stuart Mill, right, that he was the quintessential guilt-wracked atheist – “Oh God, forgive me that I cannot believe in you, oh no, I do not believe in God, so who will forgive me, please, I don’t wanna be damned forever, oh wait,” as in, essay after essay, pages and pages. I think these stories and others like them are like that – as if the authors can’t grunt, say, “that’s ridiculous,” and walk off like Wells did. They have to write this in order to realize for sure the God they believe in is unlikeable and kill him outta their heads.

Carson Grubauch’s reflections on Cerebus the Aardvark: Latter Days seem relevant to that point. Unlike me he seems able to see why an author would feel this need, so check it out.

This post concludes my little series on comics religion, at least for now. I wouldn’t mind some feedback about it – questions or points-at-issue for me, observations about other comics, suggestions for related posts, offers for guest posts, all are welcome. If you’re interested in my technical perspective as an evolutionary biologist and in reference to The Island of Doctor Moreau, see Should we talk about religion at my other blog.