It took a lot of working out the context in my mind, but I’m finally ready to look at a very interesting species of comics villain.

It starts from the issue I raised in Super, thanks for asking, which is that Superman isn’t there. The substance named “Superman is” presumed, rather than exemplified, particularly in comics, in part because so much of his cultural identity was formed on TV. Most comics stories about him show how he’s deviated from this ineffable “is,” rather than depicting him straightforwardly being and doing it. Thus the “is,” although rarely or never seen, is defined by how a given usage either almost gets it, with the degree thereof hotly debated among the fanbase, or shows a distinct lapse from it as a plot point.

You can take this approach out of his skin, too, via a character who isn’t him … or, in the dodgy sense I’m using the term, “is.” It seems to me that this technique is practically obligatory; it demands to be done, in order to show the “is” by a very dedicated, dramatic “isn’t.” And I’ll get right to the most extreme form, all the way into villain territory, which has a rich history. 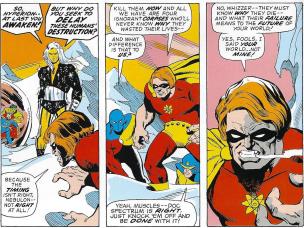 The originator is probably Hyperion, the “take that Supes” guy at Marvel, introduced as an Avengers antagonist by Roy Thomas and Sal Buscema all the way back in 1968. I first encountered him in the Defenders in 1974 (Steve Englehart, still with Sal), and also in the Avengers (with Englehart and George Perez, as discussed in And the horse you rode in on). There have been lots of versions and twisty-turns in his concept since then, to the extent that he’s a meta-text on his own, but for now let’s stay with the basic form.

Hyperion’s trappings are identical with Superman’s:

So what’s the difference? Obviously, it’s that Hyperion is an asshole, but crucially, he’s just an asshole. The concept really doesn’t need a special psychological condition or justification; in fact, I think that would fatally detract from the point. Think about this with me: in order for Superman to be maximally villainous, what he really needs is the ordinary human degree of temper, pettiness, ego, and conflicted politics.

That’s a damn impressive notion. It’s a straight-up counter-strike to the presumed, or widely-stated idea that what makes Superman a hero is his humble and decent upbringing by salt-of-the-earth small-town Americans. Most of the examples in the rest of this post go in other ways, investigating other variables, but this one is the whole underpinning concept of Strong Female Protagonist.

The tagline of the series is the adventures of a young middle-class American with super-strength, invincibility and a crippling sense of social justice. One doesn’t have to oppose ideals of social justice to see that the implications are pretty rough, and they have played out harshly at every step, even page by page. It’s not a sweet li’l comic about how a nice progressive millenial is just the right superhero to show the bad people a thing or two. Alison was never a very nice person – she only wants to be, and that can end … badly. Click the page to see the final dialogue. It’s not a throwaway line; everything in the story beforehand leads to that admission, and everything since has proceeded from her having said it.

Check out the three-page sequence beginning with this one to see where it’s gone by the time of this writing. Also see the comments, where cries of “no you’re writing her wrong” compete with the enthusiastic cries of encouragement for her to abuse anyone whose politics differ from hers, or rather, as those particular readers conceive of them.

Back to the historical view. I don’t know why it took so long for the Super Bad  concept to receive dedicated attention, but once it did, look out!

I see Alan Moore’s role in all this not to be the ruthless deconstructer, but rather the ever-faithful lover re-discovering and seeking to express his devotion. I’m with this guy: for what other imaginable reason would someone, having already done two thoughtful, questioning takes on Superman as well as Miracleman, pick up and “fix” Liefeld’s misbegotten Supreme? Whatever his “is” is, for Superman, even after all these years and versions and multi-layered depictions, it is as much an unspoken and perhaps unknowable gestalt as ever, not a textual entity at all.

Here’s also a key topic of reflection different from that offered by Hyperion, best seen in the Public Spirit (as discussed in Looking for a hero), Miracleman to some extent, Maximortal, and possibly Doctor Manhattan. For whom the crucial topic is the idealism that’s invested in the character by the public, corresponding directly to the cynical uses he’s put to by political powers. Veitch takes it up to 11, especially since Maximortal is “gone missing” in Bratpack, meaning, his absence is more story-powerful than his presence. 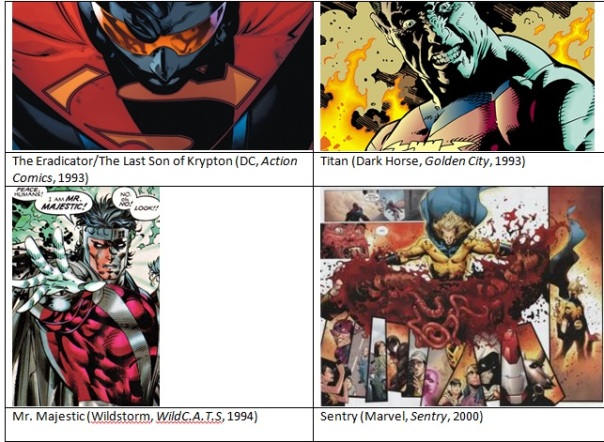 Another perfectly viable avenue of critique is to go all the way into gorn. Yes, yes, it’s dark, edgy, sinister … but c’mon, there’s obviously a certain satisfaction to be gained from drawing um, I mean, this guy squishing people’s heads and ripping people’s guts out while not even the superheroes can stop him. The interesting thing is that – I think – this is not the automatic villain-tag that the original Hyperion’s basic, quite ordinary assholery is. You can see the Hideously Violent but not Gone All Wrong perfectly in Apollo (Wildstorm Comics, The Authority).

By the 2000s, these variables are now established, so the rep/expectations issue gets a new workout with Supershock, and the human-values vs. alien-identity hits a particularly gory high note with Omni-Man. The latter also brings in the stress of romance and kin – Invincible is practically defined by “what if Superboy is Superman’s son?”

Remember how I said Hyperion evolved his own within-Marvel meta-text, with various versions of the character from different dimensions, different “takes” depending on the writer, and so on? This happens for any of these characters if he’s around long enough. In other words, an attempt at defining a particular take on Superman is primed to explode into fractals.

Here’s a tricky concept: that villainizing Superman relies on either dehumanizing or humanizing him. It gives me a hint into the primal tension of the concept: is he extra human or inhuman? Does he need to “learn to love” from mere humans, like those ubiquitous oh-so-advanced energy-beings in Star Trek? Or do humans need to take a page from his book, as he tolerates our frailties? Or is he “too good for this sinful earth” and no matter what he does, we’re too broken to be helped? 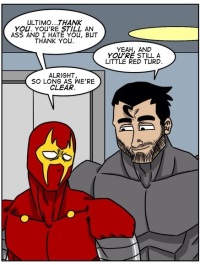 That point also explains the non-villainous expys whom I like the most: in addition to Apollo, that’s Victor in Hero Alliance (see Striking twice, someday), Epoch in Magellan, and Captain Ultimo in Supervillainous. Regardless of their elevated power/status above other super-characters, regardless of their special social status, all of them are blessedly normal in their passions and frustrations, and manage to keep it together to be admirable anyway. However, all of them also need a hefty dose of in-fiction presumption that they do enough unmitigated good to matter, without showing it in action.

Dehumanizing him seems to be the more common source of villainy throughout the characters I’ve pictured, whether emphasizing his literally-alien origins, his alienated or delusional origins, his “you can’t understand me” perspective based on his powers, or certain meta-fictional qualities that literally place him in a different reality from other people.

Call me cynical but I think the Hyperion concept is more critically accurate. Without that in-fiction presumption, the more identifiably human Superman is, the more understandably he becomes a bad guy.

Think about it a bit. What’s your Super Bad like?

Links: TV Tropes did a good job with this one – consider the interfaces among Expy, Captain Ersatz, and Beware the Superman

Note: I obviously left out the various edgy versions of DC’s version of Fawcett’s Captain Marvel – too complicated, as discussed in my previous column. I also put aside the heroic stand-ins permitted a tad of ambiguity, like the Martian Manhunter at DC, Gladiator at Marvel, and Apollo at Wildstorm. Honorable mention goes to Icon (Milestone, Icon, 1993), who’s Superman as upwardly-mobile American black guy with conservative politics, for which I appreciate the precise humor.