Oh so many hot-buttons! First is the glimpse at our main character’s name and background. Yes, that’s right, he’s Jewish, only not any sort that makes sense to discourse in the U.S. They’re from Beirut; Raphael’s parents moved to the U.S. when he was 5 or so, during the Aoun Rebellion, and after the Lebanese Civil War’s end, he spent many of his summers with relatives in Beirut. Raph doesn’t keep his religion a secret, but he’s not observant except insofar as his parents like it, so it surprises people. The Lebanese ID card is his father’s, featuring the confession (stated religion). That convention is now discontinued, as it turned out to be a bad idea during the Civil War, especially if you weren’t Maronite Catholic. Raphael uses it as a teaching prop; that’s why he has it in his office, and he suspected he might need it at this meeting, so brought it along.

No widely-known terminology even acknowledges this subculture’s existence. In Israel, if you’re not Jewish and live inside the 1967 lines, then you’re an Israeli citizen but not an Israeli national, and subject to considerable discrimination, called “Israeli Arab,” or if displaced from your property, “resident absentee.” Palestinians in Gaza and the West Bank are called “the Arabs” from within those lines. Finally, if you’re native Arab and Jewish, then in Israel, you’re Jewish, never Arab, and yet also marginalized as Mizrahi. Disavowing the kin ties and synonymous culture between non-Jewish and Jewish Arabs is one of the primary goals of Israeli educational policy.

All of that leaves out families and communities like Raphael’s, who are Jewish Arabs in Beirut, with no historical connection to Zionism or to northern European/Yiddish Judaism in general, who never went through pogroms or anti-Jewish massacres, who’ve always been there continuous with Mediterranean culture, and who consider the concepts of both Diaspora and Aliyah absurd. Having fought with the British against the Nazis, they also look askance at the Israeli appropriation of the Holocaust, as the Zionist history re: Nazism is by no means clean. Being repeatedly invaded and bombed by Israel doesn’t help either.

Another button is the stake in the opening discussion, which is partly autobiographical. U.S. campuses are undergoing a crisis about how Hillel International relates to local Hillel clubs – whether they’re “chapters” or merely decide to be affiliated with it, and what the admin of such things is. Currently it’s challenged by the Open Hillel movement, which states that any given Hillel should run its own affairs like any normal campus club. Open Hillel typically overlaps in membership with local campus Students for Justice in Palestine, and the prospect that BDS (Boycott Divestment & Sanctions) would be openly discussed across Hillels, nationwide, is what terrifies Scott, the HI representative. He sincerely believes that BDS, Open Hillel, and SJP are sources of physical and psychological danger to Jewish students. This language makes university administrators and boards of trustees very, very unhappy and has resulted in a considerable amount of restrictions on SJP, nationwide – which in turn receives protest and pushback by professors like Raphael, who is one of the campus advisors for SJP. 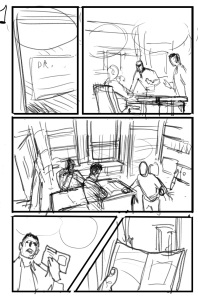 It took a couple tries to get the blocking right on page 1, to indicate that although Raph is the prof, he’s actually administratively the least powerful person in the room.

I based Scott partly on a real person I clashed with when I was faculty at DePaul University, and advisor for the Students for Justice in Palestine. He was the representative for Hillel International, which was not a staff position at the university, and campus Spiritual Advisor, which was a staff position. Furthermore, Hillel DePaul was not categorized as either a religious club or a political one. Since these and other campus club categories were administrative desks, each desk would point at the other whenever some issue came up. Therefore, this particular guy was simultaneously staff and not staff, external (HI) and local (HD), and due to the category trick, receiving no administrative oversight. He’d become accustomed to running Hillel DePaul with little regard for standards of conduct. It took about a year, but I finally forced the administration to admit that this incredibly irregular situation existed, at one point going nose to nose with one administrator and citing the gravitas and credentials of the other spiritual advisors, then asking whether this person had any credibility in this role at all. Not long afterward they took him off staff, and he quietly disappeared from the HI position as well.

The third button is Hezbollah, or in slightly more careful spelling, Hisb’Allah. Hisb means “party” as in political party so, “Party of God.” Al- means “the,” so Lebanese slang for the party is Alhisb, or in English “The Hisb.” And yes, they did fund and provide for the reconstruction of the synagogue in Beirut, and the other history on page 2 is accurate. This story shows that Raph had considerable contact with them during his summers in Beirut, and there exists a state of uneasy accord between him and them now. I can’t say exactly how his powers relate to Hezbollah specifically, but there’s some history there. For Zahra’a to acknowledge that he’s the Sword of God as opposed to the Sword of Islam is a big deal. 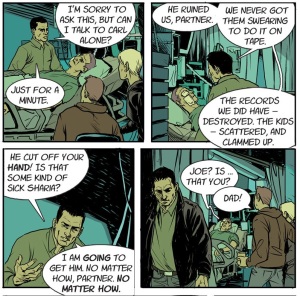 Joe Daoud (birth name Yusef) is a powerful figure in this series. He’s American-born, in his early 40s, which means he would have been in his late 20s at 9/11. As with many people, he associates his religious values with this commitment. He believes wholeheartedly in the American Dream and feels that he, as a citizen, should represent mainstream Muslim commitment to American citizenship. Joe was already in law school in 2001 and immediately decided to make his career in the FBI. He and Carl have been partners for about ten years. He is in all ways a very good guy, a “good cop.” He loves his family and his country, values his work and his partner, and strives to display the the values of his religion in contrast to those he feels are mis-using it. You’ll note that he assumes that the vigilante assailant who stunned him and maimed his partner is a stereotypical rabid Islamist, including over-interpreting Carl’s injury.

Sunni Muslim communities in the U.S. are typically strongly oriented toward education, professionalism, and mainstream patriotism. Most of them have cooperated completely with law enforcement regarding terrorism or, in the absence of domestic terrorism of the kind people expected, what the U.S. security forces like to call radicalization. Those forces are a bit confused about what “radical Islam” even is, and are in a state of paranoia generated by the infamous Terror Screening Database. This FBI list constantly updates every single report of “someone said America should be blown up” or “a suspicious Muslim-looking guy was hanging around” without verification. The atmosphere it creates plays a big role in why the FBI runs these stings, which essentially manufacture fake-terrorism, and why the agents rarely question their efficacy.

All of which leads to our new, menacing character, who’s called Spule. It means “coil” in German; although he’s Pakistani by birth, he gained the name and rep in Berlin. You’ll find out lots more about him in the stories to come.

Which will themselves be a little while in coming, as this series goes on hiatus. But not for too long.

Posted on December 27, 2016, in Adept Comics, Sword of God and tagged Friends. Bookmark the permalink. 3 Comments.