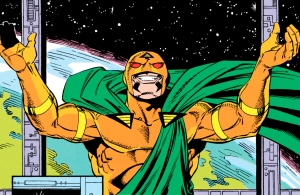 It starts with Kobra: what if he were not insane? Not to say his faith is real necessarily, but it would be no weirder than any actual one and better-researched than most fictional ones. And his “cult” would be tied to real-world politics and would have at least some curb appeal.

This is a weird comic to write – at first, I wasn’t sure whether it would work at all, and now it’s working so well that I can’t imagine not doing more of them. Unlike the other titles, the protagonist resists access, even to me as the writer – there are a few things I really didn’t want to do (see), but I didn’t find what to do until the second script was done, so this story saw a lot of revision on the fly. Now I feel as if I know him very, very well, but that doesn’t mean I want to display much per story.

The core information scheduled for the second story include that he was imprisoned at age 15, “tried as an adult,” for a somewhat dubious assault charge (just a teen scuffle), then some years into his sentence, killed a guard, which mandates execution in California. He was on Death Row for over ten years, during which he met Phyllida Pierce and began his cult/politics, and then he was executed at age 30, in 2006 which happens to be the real-life year of the last execution in the state. Both the event with the guard and the unusual outcome of the attempted execution have a lot to do with his super-powers. 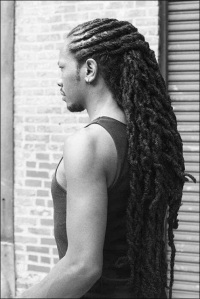 Finding the right hair helped me and Genn a lot

Who is the Ophite? As a character, he’s starting pretty sketchy. I don’t mind that – the idea is to discover the character through moments of adversity and decision, as we go. He’s Jerrod Towns, a California black man about 40 years old, therefore born into the War on Drugs at its inflection point. His entire life, including extended family and community, has been framed by police, arrest, detention, the legal system, and prison. He is incredibly hardened, invulnerable to influence or coercion of any kind – not because he’s armored in the “hurting inside” sense, but through genuine strength and knowledge. Discovering more about him as a person is part of the point of the stories, but I can tell you what he’s not: an entertaining celebrity, a Magical Negro, a reassuring upscale assimilationist, a grateful recipient of white understanding, or a stereotyped roided-out jailhouse thug from cable TV. Age this guy to about 40, beef him up a little, and while keeping that hair, tilt the look toward seriousness rather than glamour. He’s thoughtful, present, unafraid, uncompromising, and impossible to shuffle off into the “tragic victim” and “angry, why are you so angry” boxes.

Some other interesting points include that he’s untouched by the common media-entertainment memes concerning black comportment and has never developed the reassuring/fun persona which serves as a professional survival technique. So both his seriousness and his humor are entirely individualized, which I intend to be thoroughly challenging to everyone.

There’s a lot going on in the potential stories for the series, much of it traceable to issues I’ve written about before:

The politics of prison and slavery are no joke and I used them as the spur to set off the issues above. The back-story for these ten pages lie in the tangled history of federal vs. California state sentencing. The big context is the 1994 three-strikes  amendment, for which the second conviction requires a double sentence of the maximum listed for that crime, and the third is automatically 25 years to life imprisonment. In California, always schizophrenic between law-and-order vs. social experimentation, it’s undergone slow, back-and-forth alleviation:

Federally, not much changed until recently:

So the problem here is that the judge who sentenced Marco Mondragon’s third strike opted for 25-to-life anyway (saying it was “serious”) and assigned 25 years, refusing the probation option. Now it turns out he’s applied for sentence reduction, and obviously he’s eligible, but the district judge says no – and it’s the same judge, who’s been promoted to district level, and she won’t recuse herself.

Which then sparks the spiritual and social-cult issues: first, that the third and final Sophia is discovered/created from the organization’s lawyer; second, that the three Sophias feel no qualms about resolving the immediate issue through force, which is not what Jerrod was expecting; and third, that beyond the immediate issue, the Ophitic endeavor as a whole has drawn the ire of God’s angels (although whether the events on page 9 are “real” or more like a hallucination, I leave unresolved).

Tied into that is, of course, the origin stories for each Sophia, and their differing outlooks (not too evident in this story). Genn put some real heart into the transformation of Sophia Barbelo and her almost intoxicated sense of empowerment. You can see that Sophia Achamoth switches back and forth between her old and new personae, whereas Sophia Barbelo will almost certainly never do so. There are lots of little bits for all three in this story which are plot points for later, including Sophia Prunikos’ unique relaxed relationship with Jerrod.

For the visual design, I wanted to go with big-ass panel treatments from Jack Kirby’s New Gods and John Buscema’s Silver Surfer, typically two to four panels at most. I was blessed with Moon Knight #10 as well, in which Bill Sienkewicz stuck to a strict four-little-splashes grid for the whole story, and even went through it page by page with Genn to examine how transitions worked. She was of course free to mess with the grid, and did so, for a very effective design throughout our story. Oh, and I also wanted to use lots of circles for the weird stuff, and that seems to have gone well too.

Well, how about the next story? It’s scripted and the roughs are done. However, the facts are harsh: I can’t afford this any more. Please consider clicking on the Patreon and helping out, ’cause Adept Comics needs some grassroots to keep going. 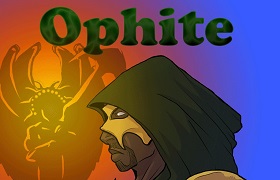 Posted on February 4, 2017, in Adept Comics, Ophite and tagged Gnosis. Bookmark the permalink. Leave a comment.