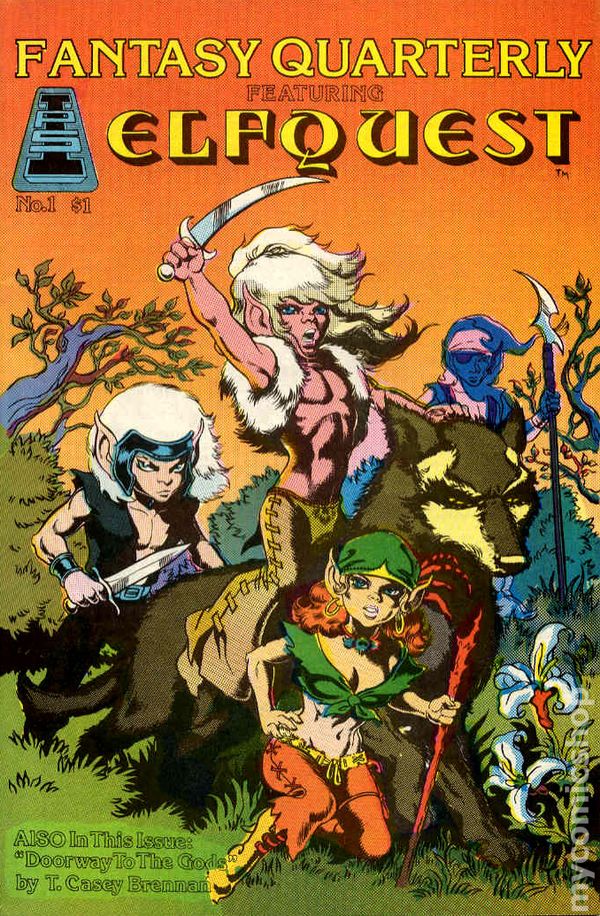 With pride, I say I was an original adopter of Elfquest in 1978. Yes, it was a purchase of Fantasy Quarterly #1, black-and-white on swiftly-browning newsprint, with clearly visible dots in the cover color separations, thus you did best to pull your head back and blur your focus a little. This was at the comics store in downtown Monterey on Alvarado Street, where I biked at risk to life and limb and bought my Savage Sword of Conan, and where I passed up buying Cerebus the Aardvark #1 because I thought misspelling “Cerberus” was stupid.  And it was about exactly the point when I stopped buying newsstand superhero titles (the first time; see The beginning), age 13 or 14. 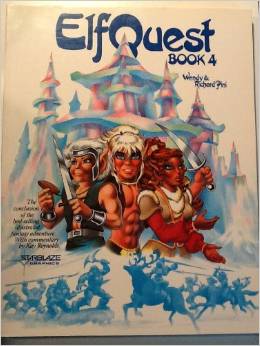 Do I really have to provide an obligatory mention of quality? The series is a legend; anything I’d write is no better than “gee the characterization is rilly good,” “wow that art is grate!” If I had to pick two things, they’d be (i) the blossoming of inspiration from Vaughn Bode into a new realm of action and emotion, and (ii) the extraordinary focus and pacing, which in 20 issues resulted in one of the most coherent stories in pop media. I never saw another single issue and missed the launch of WaRP Graphics; I didn’t buy any comics for a while, and when I did, these and similar titles weren’t easy to find. Instead, I picked up the color collections published by The Donning Company, first printing each, throughout the early 1980s. [Possibly offputting clarification: in this post, I am only talking about those first 20 issues collected in the Donning volumes, which concludes with discovering and re-taking the High One’s palace. I haven’t read anything else under the title and any-such-thing else is off-topic.]

What inspires the post, however, is the consistent input I’d received about the series from others, which seem focused upon it as discourse on sex. Restricting my response only to the issues I’ve read, it struck me as weird; sex wasn’t actually my focus or sense of discovery in reading the title, as I’d come in at the ground floor already steeped in stuff for which Elfquest was tame in comparison. True to its moment of history, though, the series deals with the emotions and physicality of sex/relationships as absolute plot points, and of course, that’s not tame at all either. So I want to take a look.

Still, we’re talking about polyamory, aren’t we? Or some particular thing which gets included within that vague-in-practice term? Maybe and maybe not. There are actually three independent things at work: recognition, sexual attraction, and marriage (“life-mates”); and then the monogamy-or-not issue gets thrown in on top of that. To use my favorite provocative word in my favorite non-standard way, it’s wonderfully problematic.

This is the fictional, even science-fiction-fictional element. At first glance it’s plain old Broadway-to-MGM love at first sight, Oklahoma style. However, it’s actually pretty disturbing and the characters often think so too.

Therefore recognition is absolutely not equivalent to the “true love at first sight” meme – I’d even say it deliberately defies the concept, although some of the most extreme possible situations don’t arise in the story. You could be distracted from this point especially for the first major storyline, as Cutter and Leetah do eventually fall in love and do become life-mates … but recognition merely threw them into the potential situation to do so, it’s not those things in itself.

The elf cultures all sharply distinguish between recognition-mating and life-mate relationship. [For the issues/story I’m talking about, both are presented wholly in het-centric terms, so I’ll invite any reader to provide a guest post about same-sex issues in later Elfquest.]

Therefore recognition is even less associated with marriage than it is with love, and marriage is definitely predicated on love. But does marriage (“life-mates”) mean exclusivity?

Monogamy isn’t associated with/without recognition in a simplistic way either. Two of the most monogamously committed couples in the series are recognized (Strongbow and Moonshade, One-Eye and Clearbrook), but one such couple is not (Redlance and Nightfall), and another’s relationship is strained by recognition to a third party (Scouter and Dewshine).

Significantly, Leetah and Cutter’s recognition and emergent romance-to-marriage turns out not to cancel the romantic triangle they form with Rayek at all. It would have if Leetah’s initial reluctance to marry Rayek, pre-Cutter, were a signal that “he’s wrong for her” to the reader, as one might be led to think by that part of the story in isolation. However, in the long run, it’s absolutely clear that Leetah still loves him both personally and physically, that he cannot stop loving her even with the full weight of recognition of another (and love, and life-mate status, and children) against him, and that a lot of Cutter’s personal development lies in accepting this.

Recognition aside, I don’t think that there’s an identifiable “elf value” about sexual fidelity.

Again, although elves in general seem less hung-up than humans as we know them, the basic values don’t seem very different from most-common human practice. That’s a good, even great thing for the story, because it means that the Cutter-Leetah-Rayek triangle isn’t about the special/fictional qualities recognition at all, and thus the story is not devalued by relying on what-ifs to be resolved by unreal things’ “rules.” It’s about these particular three people for whom love, sex, and commitment just won’t line up neatly, not even after marriage and children come into play.

Rayek does accept that Cutter and Leetah are life-committed, and Cutter does come to respect Rayek and not to resent Leetah’s continuing unconditional regard for him … but Rayek can’t stand it when Cutter and Leetah begin to have sex in his presence (despite Kahvi’s attentions), and Leetah instantly reacts to his response. Although Cutter actually initiates Leetah going to Rayek for that one night instead, he’s not thrilled about it – see his face in panel 5.

Therefore the scene is compelling as an event, not as a new relationship. They don’t “after all” take Savah’s suggestion from seven years earlier, and there is no polyamory here in terms of a commitment. It was a moment of acknowledgment of raw emotions during an event which, as I mentioned above, could well have been their last few hours of life at all. Afterwards, Cutter and Leetah remain life-mated, Rayek remains single, and if you think they’re going to have a “drop by and have a piece any time, Rayek ol’ bean” arrangement from now on, you’re not reading these characters at all.

That’s the question: can a married couple permit a “madness moment” which acknowledges extremely real feelings to the extent of sex? Not a swinging wife-swap, not an open relationship – this moment, among us, no one else or other time. And by “can,” I mean a very complex thing. Don’t give me your answer, I don’t care about yours or mine or anyone else’s; the point here is to consider that there cannot be one obvious answer.

Here’s some wisdom from the march of ages. OK, so there’s a high name-recognition radical person who wouldn’t mind if I cited him here regarding politics and violence, but I haven’t cleared sex talk with him, so he’ll remain anonymous. Anyway, we were talking about revolutionary politics and counterculture, personal-life wise, and he was interested to learn about the pre-WWII German lefty scene I’d been investigating for my book Spione. It seems that communes, skinny-dipping, naturalism, and “let’s break free of this dreadful traditional monogamy” were a big thing then, with a number of attendant meltdowns. My friend said, “So that’s what she was talking about!” It seems that when he and his compatriots were doing this very thing themselves – and it all tanked and didn’t work out and got weird – one of the group, an older German woman, had just shaken her head and opted out. “We thought she was just a prude, but it turns out, she knew all along!”

I wish people would reflect more upon how romantic primitivism clashed so hard with classic progressivism during the 1970s, and never mind the high profile older people, I’m talking about young adults, teens through the mid-20s. The eventual result was basically that classic progressivism with its missionary roots won big, even re-establishing “dirty,” referring not to hygiene but to the immorality/oh-no of perceived promiscuity, as a liberal epithet rather than solely a reactionary one. I am willing to speak from a metric ton of personal observation that one of the reasons for this backlash (against which the conservative family-values backlash actually pales) is that “let’s just all fuck and get over our hang-ups” turned out not to work, or at least not all that well or often. Turned out that way why? Cue a babble of response, much of it designed to make sure other responses are not heard.

I don’t want to misrepresent the mid-70s as the era of hassle-free sex. To the contrary. I’m calling attention to the associations among individual components of sex-and-relationship practices, which bears no resemblance at all to the way they came to be configured in the 1980s and then set in stone through educating younger people. Personal commitment (“romance,” “dating,” “together,” there’s no good word for it), sex, fidelity, expression of any kind of attraction (especially whether there’s a “no-fault inquiry” stage), nudity as such, display of one’s body (clothed or not), enjoyment of another’s display … and what got set in stone is a straight-up mess.

There’s a lot about that lost culture to like, and much more about it, likeable or not, to think about. You can see it perfectly in the confluence of Marvel comics, the undergrounds, the Curtis magazines, the cosmic zap, and the sword-and-sorcery, reaching a particular point of expression across the interconnected work (and play) of Vaughn Bode, Gene Day, Frank Thorne, the Pinis, and Dave Sim. There’s a mix of abandoning old boundaries in full knowledge that there must be some kind of functional boundaries in order for any of this to be livable, doable, functional, whatever we call that … and the only way to find them is to try a little bit. I don’t want to speak for other creators in past or present, but the text of Elfquest #1-20 expresses this concept beautifully in every sense of the word.

Obviously Elfquest went on to bigger things, with multiple creators and much, much more setting content. You’d have to be blind to miss its full-spectrum impact across pop and fringe creative culture. It’s certainly a serious data point in the history of independent comics publishing, and it’s also a case study for debating my ongoing points about ‘Verse. As I said, I’m not the right reader to go into that; a guest post about it would be very welcome.

But … why aren’t I? Why did I make no effort to catch up and get as Elfquesty as possible, especially during my no-prisoners creator-owned reading madness of the 1990s? That’s a red flag, in self-and-history terms. I think it must be that the era of issues #1-20, and exactly what’s in those issues relative to my life, are precious to me. Selfish as it obviously is, for some reason I want “my” Elfquest to be its own, one thing.

Next column: The change of illusion (April 2)