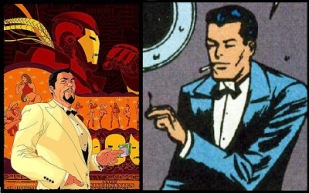 The Two villains column turned into a beast, so it’s still in production. (This paragraphis brought to you by the “experience the 70s again!” department. Imagine yourself at twelve, opening the issue that you just bought whose cover promised the continuation of the ongoing story, to find a substitute one-shot instead.) I’ll be adding images to this one as I get the chance, too.

In related news, the move to Sweden is moved! At this writing, I and the family are staying at a cabin on the shore of the Baltic (technically inland, archipelago-wise), as our house gets enough of its working parts installed to sustain us there while renovations continue. Bye-bye U.S. phones and car, hello to Swedish ones. Various applications proceed.

Back to the topic, wealth in comics. More specifically, wealth as a character component for protagonists. Since this is a quickly-written column, I don’t plan on busting out a thesis statement with an argument, so much as to raise the topic and see what happens.

I figure I don’t have to go into why “money” isn’t wealth, nor to spend pages scrubbing out a century’s worth of confusion about actual class structure vs. labels of upper/middle/lower, nor to talk about the societal shift from asset-based wealth to debt-based lifestyle which pretty much frames the whole period of my adulthood.

Here’s the thing about me and wealth – there’s no easy catch-phrase, as I’ve never had any and I’ve often been surrounded by it. I was born into something halfway between low-rent and dropped-out, and often in contact with either more extreme poverty or with more extreme deliberate rejection of material wealth. Neither of these is anything like TV; the former was often tough & limited, but not wretched (this is before it became inextricably associated with debt), and the latter was not stereotypically self-indulgent posing.

All this was in an area generally associated with affluence, from outside, which is to say, observers miss the meat-and-bones of a community with a visible high-income sector. Then add my education: in high school, a townie on scholarship among not only the affluent, but the very, very globally wealthy; in college, on scholarship and work-study among those who aspired very hard to be wealthy. I found myself simultaneously …

By the way, class, ethnicity, and gender don’t intersect, they’re all mixed up. Big difference, which seems to have eluded most of academia. Argh, this is getting way too boring! Suffice to say that one of my big priorities all my life has been to avoid debt peonage, and amazingly, given the nail-biting risky steps of student loans (a decision at 16) and a mortgage (at 37), I succeeded.

Now for the comics talk, thank God. What makes this topic impossible for a single column is not how many wealthy people are featured – they’re rare! – but rather how a nominal character is depicted differently at different historical moments. I can’t summarize it here, but I’d like to get started on trying, probably with your help in the comments.

Obviously, from the perspective of this blog, we’re talking about Bruce Wayne and Tony Stark. What does wealth mean to either or both of them? I have no quick answer, but a couple points should be included in trying:

Another topic I’ve dwelled upon ties in: that the classic bank-robbing comics/movies “crooks” are completely fucked; there’s no way that seizing bundles of cash at a bank will ever, ever make anyone wealthy, not in antiquity, not in the 1920s and 1930s, not now, not ever. It’s relevant to the current topic because it illustrates the divide between the characters I’m talking about and everyone else. Say there were no Batman; Gotham crooks could rob every dollar from every bank in town, and not one of them would become Bruce Wayne.

That’s clearly the source for the long-standing and ongoing critique of Batman as an elitist oppressor [I’ll add some links soon], and rather than a hip snarkfest, I think it’s a solid topic. The point of the moment is that Iron Man seems to escape such critique because he’s not a vigilante, and doesn’t run around stopping muggers in alleys. His 60s foes were all about the Cold War, for example, and his 80s foe was himself. (Granted, he leaned that way up against the Maggia in the 70s, which bears re-examination, as the danger of the Maggia was not wretched savagery and muggings and shooting your parents, but genuine societal power.)

Here’s a quick nod toward Nighthawk, perhaps the quintessential Marvel hero at least among one axis (see I like him anyway), who sometimes provided a stand-in for critiquing Batman. Ham-handed as the Sons of the Serpent storyline may have been, at least it still brought up the point that wealth itself is a potential source of crime, and that a wealthy person can’t just sit around not paying attention to what’s being done with it. Another quick nod goes toward Janet van Dyne and Henry Pym, both of whom have been so distorted since their original appearance and concept as rather more realistic American gentry, that I can’t do more than nod.

But hold on! Aren’t we forgetting some other characters and comics? Why yes. Let’s clarify that the long-standing claim that comics are dominated by superheroes, especially in the U.S., is a fandom artifact rather than economic or any other reality. You want to talk about comics success and dominance and prominent characters, then you want to turn to Harvey and Disney – I’m talking about Richie Rich and Uncle Scrooge. I can’t believe there isn’t an enormous academic tome about these two and related matters, as well as popular reader-friendly versions. These are insanely, globally popular characters, and each is explicitly not only wealthy and privileged, but filthy rich. And it’s not merely as a target for humor, but somehow a positive thing, which also manages to preserve the privilege and separation from the rest of us. Dammit, dissertation writers! Get on it!

And the final example tied to those two is Daddy Warbucks, and here’s where my comics-fu fails. There are people who know everything about newspaper strip comics and their many twists and turns of content, and I’m not one of them.

I found a moment to give this post some more weight. Let’s begin with the cultural touchpoints for celebrity wealth in the twentieth-century U.S., especially those which would have fed directly into newspaper and newsstand comics, and especially regarding three crucial terms.

Term #1: “millionaire,” which by mid-century had replaced the more politically-charged “tycoon.” It’s as if The Jungle and the Depression had been erased, leaving only the 1890s Carnegie-Rockefeller image-building in their place. The millionaire (the term is by no means quantitative and probably undersold itself considerably) is a patriot, happy to work with government especially when it comes to transport and military tech, and always good for some advice when the politicians need it. He’s dedicated to the common good both as happenstance (“creating jobs”) and as activist via philanthropy. It’s important that he made the million, rather than just having it. He’s always self-made, either a wheeler-dealer or industrialist or both, tough and canny, but fair; he displays that prosperity lies in the range of human grasp, that anyone can make it if they try, as long as they’re not lazy. Clearly he’s not a banker or financier as such, it’s not “hands-on” enough, but the term “businessman” overlaps without really going there. (I suggest that works like The Fountainhead merely display this image rather than inventing it.)

The historical figures, or rather, the people who took on the cultural role/perception, include Howard Hughes and William Randolph Hearst. The former adds the spin of the inventor and innovator, and latter ramps up the philanthropy.

Term #2: “playboy,” which I was surprised to learn is quite old and had acquired its modern meaning well over a century ago. By same time I specified above, it was fully in place: affluent and cosmopolitan, bon vivant, hip and progressive (a bit Beat in contemporary terms), promiscuous or at least polyamorous … the magazine of this name was founded in 1953 and certainly Hugh Hefner qualifies, but I think it also relies heavily on the popular image (rather than the reality) of Errol Flynn , who brings in the athleticism, combat, and daredevil aspects.

Some points about the comics/cartoon characters: