The Spectre wears a green Speedo over bare, pasty white skin. And he is scary as shit, man.

During the course of the readings and discussions of the vigilante series I did with Steve Long, I (or we) came to realize the phenomenon was bigger than the Batman-Daredevil-Moon Knight trajectory. In my recent post The smoking guns, I suggested that the lethal, extreme to the point of psycho aspect of the comics vigilante was part of that bigger picture, focusing on the Shadow and the Spider. But these characters overlap with comics, being associated much more with pulp fiction and radio, and there yet remains one corner to the triangle of fundamental vigilantes, this one born-in-comics, comics-centric to this day.

Briefly, for those who don’t know: the Spectre is a murdered guy who is driven to avenge victims of murder and similarly extreme crimes. Whether he’s the guy, or the guy possessed by a spirit of some kind, or half-and-half, varies by the writer and era, but the key is that he’s hella powerful – cosmically, insanely so – and visits sadistic, custom-made dooms upon his targets which are squeezed right at the top of outright horror in the history of the medium.

The Spectre’s long comics history is available all over the internet, so I won’t try to summarize it; I’ll only point to these incarnations of interest which should indicate the character’s significant DC pedigree:

I only know the Ostrander-Mandrake run, but I know it extremely well. I had an insider’s view of its beginning stages as I spent most of the summer of 1992 in company with John and Kim (taking a quick break between my M.S. and Ph.D. programs). This was also a summer of considerable personal and philosophical conversations with both of them. I’m sad to say that we did fall out of touch some years later (see Kim Yale), but those conversations continued by telephone for several years. The Spectre wasn’t the only topic among us, obviously, falling well behind Suicide Squad and Grimjack in my direct interests of the time. But clearly it’s where John’s heart lay, by 1995 or so.

I bought the full run month by month, but at the moment, digging in my disorganized storage/moving boxes, I’m only coming up with #25-50. So some of this is based on perhaps-muzzy memory. (A lot of my posting is like that!) A few points …

I’ll toss in a couple moments of love for Tom Mandrake, whom I first encountered on his long run with John in Grimjack (see Go to hell and burn), and whose run here is an almost-exact parallel with Gene Colan’s on Tomb of Dracula (see Mustache match). You like Colan-esque art? You like Kubies? You like inky-inked ink? Check, check and check!

Now for three all too brief thoughts about the Spectre as a vigilante hero. The first concerns powers. He illustrates that this is a dial, not a defining feature at any particular level or extent. It also clinches to me that Nexus is a full-on 80s vigilante hero (cosmic galactic ka-zap powers) just as much as the Badger (deranged local martial artist). I now think that lacking powers or rather, lacking glowy ones, is very much part of the O’Neil et al. subset of vigilantes. And not to belabor the point, but the gun-toting or martial-arts “normal” is pretty much unstoppable and invulnerable anyway through the Power of Plot, no less than any force-field or power-armor might supply.

In the Spectre’s case, we’re talking straightforwardly monstrous divine power – roll back time? Obliterate a modern city? Ramp up to cosmic size to hurl a planet? He can do it; there is no “can/can’t do” as a story constraint. Most of his actions are personal, e.g., melting a person, or growing a multitude of spikes outward from the center of their body, because it is personal, not because his scope of action is limited. Therefore he’s squarely at the farthest end of a spectrum ranging from (his end) “What will I do about evil people?” to (the other end) “What can I do about evil people?” Obviously, the whole spectrum is based on the larger question of “What should I do about evil people,” and these heroes are scattered along it – and I stress that any point along it, including the Spectre’s admittedly very extreme position, is suitable to address that question.

To me, the second topic of crime is the most interesting. Unusually for a vigilante hero, the Spectre’s human side is a cop, and John understood this very precisely: that it’s quite simple for such a character to confound evil with crime, and vice versa. It’s cognitive dissonance as drama, such that observing the contradiction the character is currently hiding from himself is actually the point of reading the story. In this case, it’s very pointed that the Spec is willing both to hide behind human/written law when it justifies his prejudices, and to defy it outright when it doesn’t.

Explicitly, upon Corrigan’s death, he received the mandate to “confront evil and to understand it.” In this telling, the point is that Corrigan misunderstands it quite badly as “strike out at whatever you feel as evil with all the righteousness you want.” The entire story is about him slowly coming to recognize that he cannot merely “recognize” evil, that you don’t know it when you see it – that evil is circumstantial, even for entities and people who are as evil as anyone can possibly imagine. In this context, the first thing to go is the belief that referencing legalities will carry any weight at all concerning evil. 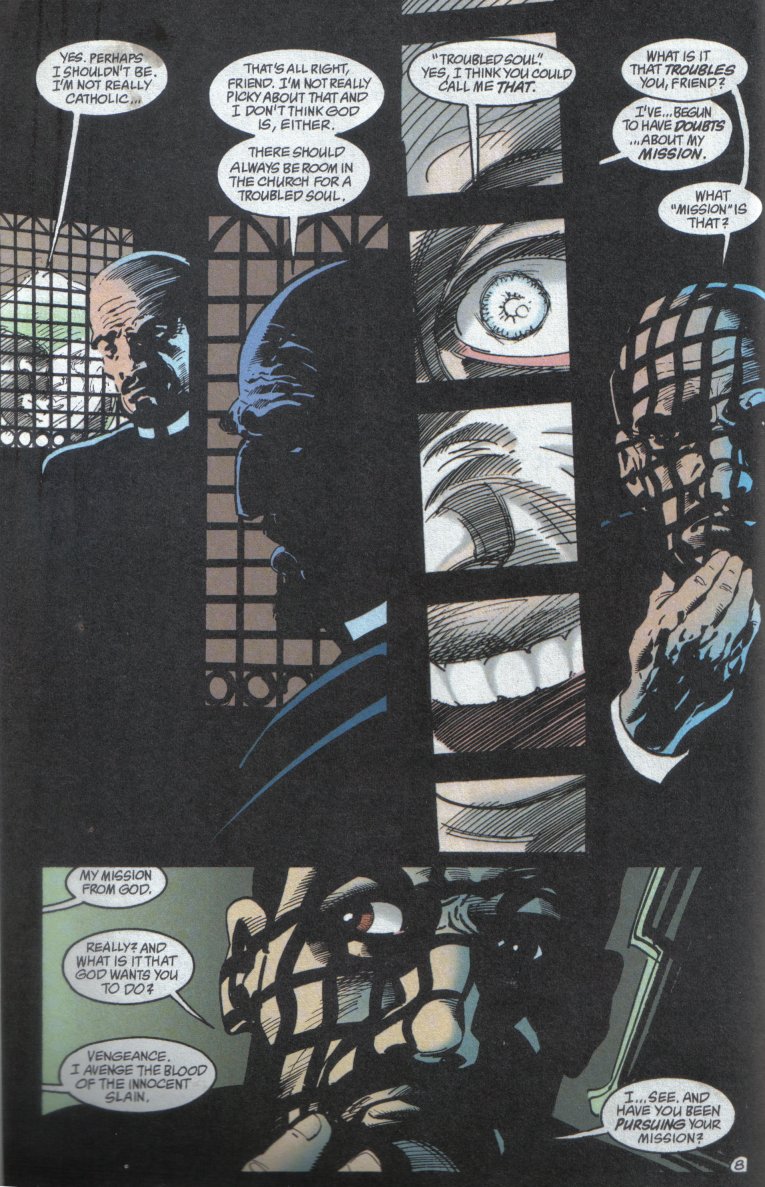 You probably don’t need me to explain how both of the above bolded topics tie into the title’s heavy attention to religion. I don’t know how much previous versions of the character went into the theology or metaphysics of his doings (exception: the brief but significance appearance in Moore’s Swamp Thing), but this whole five-year run is steeped in them.

As with most comics treatments, there’s a lot more Milton and Apocrypha than Bible and Church in the stories, but as it turns out, the specific theology isn’t all that important. Instead, it’s about personal faith and morality, featuring Father Craemer as the story’s heart. Corrigan turns out to be pretty messed-up: abused by his fire-breathing fundamentalist preacher dad, emotionally retreating into cop-hood to acquire a social and emotional crutch, traumatized by his own death, and channeling his hated dad when he visits awful punishments upon evil-doers. Criminals? Sinners? It’s all mixed up in his mind. (Let’s overlook the unlikelihood that a big-city cop named Corrigan in 1939 would be anything but Catholic and move on.)

Craemer becomes the key – can he help this terribly wounded person come to any sort of perspective about fellow humans, at all? That’s why I think the religion – so visually and textually central – isn’t actually the point on its own, but is instead a relevant, useful lens through which to examine the prior two points. The most evident story to support this claim is also the series’ most ambitious, “The Haunting of America.” I suppose that one deserves a post of its own, or perhaps in combination with similar stories through the decades, like Moore’s “American Gothic” and Chaykin’s American Flagg. I mention it here to emphasize that ultimately, the questions of morality in this title do not turn upon theology and metaphysics, but upon policy. Father Craemer may have shifted to the Episcopalians, but he’s a Unitarian through and through – evil and God and Jesus and whatnot, whatever, but the real concern is strictly what we, people, will do toward and with others, who are also people.

I confess I find Craemer’s own conclusions or example about that issue to be overly … mellow. My harshest reading is that the “meat” morality, the one that Corrigan finally grabs a clue about, the one that Father Craemer always articulates and is never (textually) wrong about, the one that’s held up by the text as the viable alternative to prejudice, textual frenzy, and child abuse … is, as I see it, borderline saccharine. “It’s complicated.” “There’s always a way.” “Be nicer.” However, I also confess that’s unfair. The story does take a stand very much in the rhetoric of its times, when Craemer explicitly adopts the term “fuzzy liberal” in defiance of its use as an attack. As a story component, it works, because that’s pretty obviously what Corrigan/Spectre – and the whole notion of vengeance-driven morality – needs a dose of.

Furthermore, carp as one might about the religious nuances or specific moral positions, the book indisputably has nuances and positions. In this it’s in a wholly different realm from the concurrent Vertigo titles, which bluntly, I don’t regard very highly when it comes to intellectual content, religious or otherwise. I know this makes me a bad, bad comics reader. [For the record, I don’t think all the Vertigo work was garbage or anything so simplistic. I did like Lucifer especially, but I regard it as simply very good fantasy with an operatic backdrop, and not much to do with religion at all.]

In conclusion: the holy trinity of comics vigilantism, we’ve got the Shadow, the Spider, and the Spectre. Dissertationists, get on it! I am but a blogger, I’ve read only fragments (if good ones) for each of them, and it’s time to figure out more.

Next: The little game that could (July 2)