← The little game that could
Very special effects →

Ah, boxes and boxes of trans-Atlantic stuff, you have at last yielded your layered secrets unto me, into my hands!

For the past two-and-a-half blogging years, I have really suffered over not having my Champions 3rd edition and GURPS: Supers 1st edition easily to hand. I know them well enough by heart to have made it through the posting I’ve done, but certain historical, design, and comics points have been impossible to nail down without the precise pages in front of me. And I haven’t played the damn things in twenty-five years, so the tactile and other direct-sensory input of holding the books, to help my memory and understanding, are a big part of that.

Sure, while living in Evanston, I ventured into the storage unit and sweated through boxes to find plenty of things, with these always on that list. But only now, at last able to shift boxes in two rooms’ worth of Rubik’s Cube as well as to shove the opened ones into sort-of categorized groups, I have them! That’s easily five dozen publications, especially if you count supers role-playing books in general, but I speak mainly of Champions 3rd edition, Champions II, Champions III, Strike Force, GURPS Basic Set 2nd edition (Characters, Campaign, Update), GURPS: Supers 1st edition, and Super Scum. Man, are my copies beaten up. It’s not just the years of heavy, sometimes thrice-a-week play; I used to take them backpacking and it shows.

Trying out a beard again, first time since 1983

This is related to present circumstances, so briefly, here’s the latest: we’ve been living in Sweden for exactly two months, and moved into our not-ready-yet house about five weeks ago. It’s now a lot more ready but the planned addition for the kids’ rooms is not yet begun. My wife has started he job; I’m now approved for permanent residency and have been photo’d and fingerprinted thereunto, so can get employed; the kids start school about five weeks from now. The big-ass container arrived from the States three weeks ago, and the first priority was to excavate kitchen stuff and other practical items, but that opened up enough Rubik’s holes to allow me to organize the boxes that remain, and to search them without turning around and around in frustration.

Thus begins my comparison of first-generation Champions (editions 1st-3rd and key supplements) and GURPS Supers (the 1st edition, the only one I know). I submit that it will illuminate core, relevant concerns for play and design which have been sitting mainly ignored for three decades.

What are we doing, and how?

During the early 1980s, fantasy fandom shifted radically. Reading the prior century of fiction vanished almost entirely, in favor of franchise style series fiction publishing, establishing hard genre conventions derived from the AD&D rules. I – and I’m not alone – was significantly put-off by this in every way (vs. the fiction, vs. the game/adventure design), seeing what I considered the source material, both literally and in its aesthetics, disappear from pop culture.

Superhero role-playing at that moment, on the other hand, offered what appeared to be the solution. Anyone looking at Villains & Vigilantes or early Champions could see the love and knowledge of the topic jumping off the pages, and liking the games went hand-in-hand with reading X-Men, (barely) still called the “new” X-Men. I’d pinpoint the famous #23 issue of Different Worlds as the moment for cementing mutual excitement between the two media. The relevant comics in the mix would soon include The New Teen Titans and Elementals.

I also point to the strong emphasis in these two games on making your own comic rather than using the game as a window into a new franchise. countervailed the fandom side of things in a positive way

In these texts, you’ll see literally zero language about how to play and say things, how to make and/or see things “go,” and any notion about what ought to happen, in contrast with the increasingly strict and codified AD&D culture and texts mainly via the RPGA and adventure supplements. I think this absence reflects a unique confidence and positive expectation built from comics readership: the idea here being, hey, we knew what comics heroes and comics stories were like; we wouldn’t be dealing with most of the people at the table not knowing it, nor with a rapidly-expanding body of source material which created a tautology with the RPG we were using. This should be easy!

Well, it wasn’t that easy. Superhero comics stories are composed of little more than flash (cool visuals), bang (extravagant significance of evens), and soap (personal melodrama), but making them is not the same as reading them. Preparing for and dealing with emergent fights and plots faced both the classic comics problem of why fights matter in the first place, compounded by the classic problems of agency in role-playing. More specifically, how do we know, expect, design, and permit to emerge:

It’s about why do we play and what are superheroes as I discussed in Medium and idiom: they fight crime!, but it’s about a lot more too. I’m getting at why these questions are surprisingly difficult to answer.

What was in fact done?

I have been feeling itchy due to not posting a timeline of some kind for a couple of months, so scratch it with me with this: 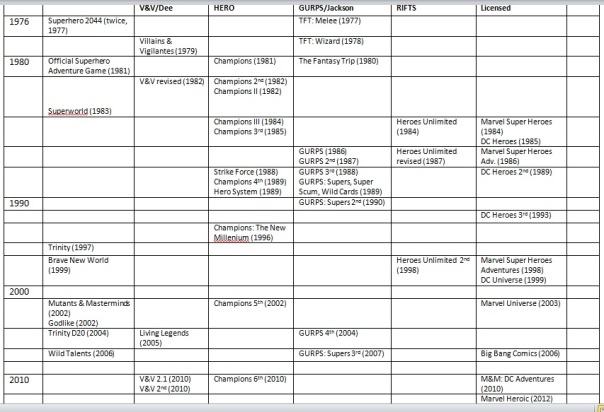 But this is of course madness, so click on supers rpg history to get the PDF in an accompanying window.

It’s supposed to give an accurate big-picture portrait rather than capture every fiddly publication, so please don’t post to inform me about what I “missed” or “forgot,” unless you’re sure it’s relevant to a point I’m making in a post. I’ve deliberately left off many good comics-type games that aren’t in the idiom I’m concerned with, e.g. Underground. That said, I’m a surprised to see so little licensing in the history, so let me know about any core books of that kind (not supplements or splats, and not movie tie-ins) that I don’t have listed.

Pause for one thing – wow, talk about personal life-timing – look at that 1983-1985 swath of design-and-publish innovation which just happens to define the exact moment I returned to reading comics and playing RPGs after a significant hiatus! (see Moses and the Mosquito)

For previous posting about this publishing and design history, including input from Steve Long, please look at Do the two-step, What does this power do?, and 90s (H)ero.

What I have in mind

The plan is to compare core features of first-generation Champions (up through 1982-1985, especially 3rd edition) with the first edition of GURPS: Supers (1989). The reason for doing this, and perhaps my first major claim of this series, is the profound discontinuity between first-generation Champions and Champions 4th edition (1989). It’s perhaps clarified by identifying the latter as practically a twin of GURPS: Supers, published in the same year.

Here’s how it went for me. I didn’t like Champs 4th very much, and recognized that if this is what we were all supposed to be doing now, then one might as well use GURPS: Supers instead, as it was better written, more elegant in design, and marginally less numerically fiddly, and (this being the value added) it had a particular grounding in geographic, historical, political humanity that no other game at the time came within a mile of. So, having moved to Gainesville, Florida, after six years in Chicago, having begun a whole new life, I began preparing for new superhero role-playing using GURPS: Supers. All the prep for the Force Five game I described in Snakes and hotties was done using that system.

However, I was also dedicated to membership in and contributing to The Clobberin’ Times APA, in which my interest in GURPS received rapid censure and refusal of inclusion. Bowed by peer pressure, I stayed with Champions for Force Five … or rather, nominally using 4th, but really preserving both the spirit and several crucial features of first-generation, as well as retaining one major qualitative feature and a couple minor quantitative features from GURPS: Supers that I’d grown attached to along the way.

In case I haven’t been clear, I think something important about role-playing as an activity was silenced and even perhaps killed in that GURPS-izing of Champions to produce the latter’s 4th edition. However, GURPS: Supers had virtues uniquely its own that need highlighting too. My experience at that moment, and through two or three years of subsequent play, left me well-placed to reflect on the following:

So here we go with a bunch of highly specialized superhero role-playing posts, comin’ down the pike. They may look exceedingly narrow, pinpointed as they are on the long-ago 1985-1989 and on these two long out-of-print games which compared to the broad sweep of role-playing are not very different. Hold on tight anyway. I intend for this to matter.

This series of posts is dedicated to the memory of K. C. Ryan and Mike O’Connell.

← The little game that could
Very special effects →