The orgasm that saved the world

In which John is upstaged

Posted in Gnawing entrails, Politics dammit, The 80s me 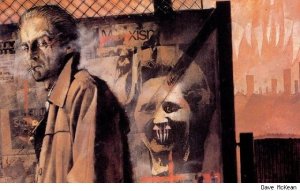 That guy on the left … on the Left.

I’ve mentioned the political angle of the 80s British invasion into U.S. comics, in Looking for a hero. This was most relevant to me regarding John Constantine in Jamie Delano’s Hellblazer, in which he definitely became his own thing relative to his original appearances in Swamp Thing. END_OF_DOCUMENT_TOKEN_TO_BE_REPLACED

Posted in Politics dammit, The 80s me