Let’s begin with a serious observation: this is art by Carmine Infantino we’re talking about, and that is a woman’s body for a woman character – no “objectification,” no high heels, no prancing model-on-runway posture. That latter stuff is The Eighties, which in actual chronology were not under way until 1983 and not the standard in comics until about 1987. Spider-Woman provides the perfect lens for the troubled transition between the bad-ass, primal, intelligent, rather animalistic women of the 1970s (see Bless me DC, for I have sinned, Long live lib and Faster, pussycat) and the bizarre Barbies of a decade later – who include, just so I can hear the radiators hissing out there, the fan-fave versions of Rogue and Storm. 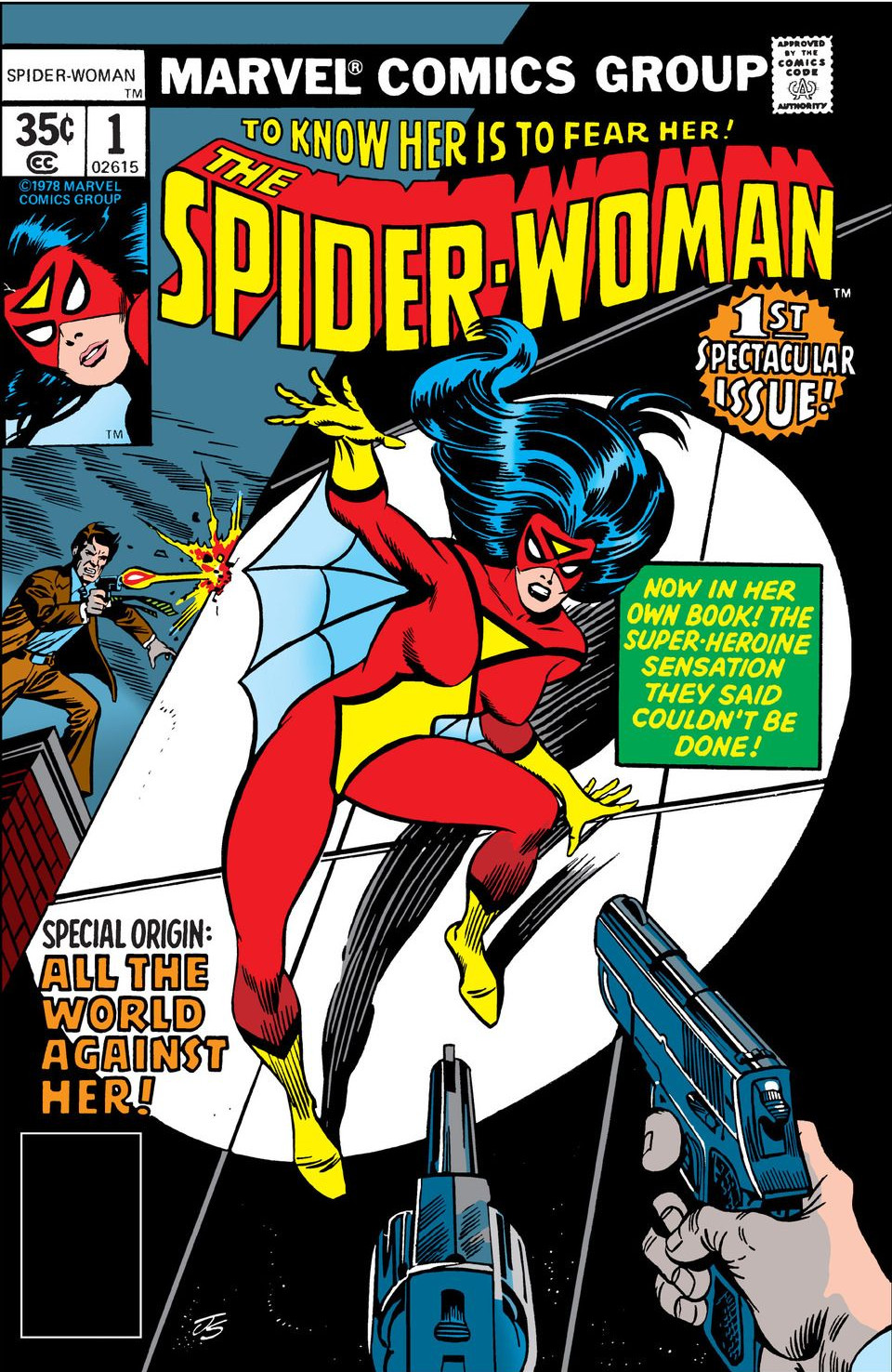 She had her own title for fifty issues, from 1978 to 1983, no small thing. Her start was like many other characters at the time: introduced by Marv Wolfman as the classic “troubled semi-villain” in, in this case, Marvel Spotlight, then cameos in Marvel Two-in-One, in a haze of contradictory explanations and interpretations, and then a finalization regarding powers and personality for her own book. Also, along with the Black Cat, she represents a fill-in for the void left behind when the Black Widow was rendered too tame. The end of the run wasn’t due to crap sales or anything like that, but to one of several publisher-editorial assassinations during Jim Shooter’s tenure as editor-in-chief.

Carmine Infantino busted out 19 issues doing this thing. Most of the rest of the run was drawn by Steve Leialoha, so, not talking about amateurs or second-tier here. Now for the writers list which provides the framework for my post topic:

I’m not doing this as a survey or review. I’m doing it to pinpoint a weird variable that for which this title is almost an inadvertent dissertation. I’m also not claiming that the 70s women were well-written, but rather that their oddness and problematism reflects a genuine struggle or crisis-phase of the culture, not the cheap heat and nigh-malevolent sabotage of the later step. There’s an interplay among competence, sexy, and sinister that I’m interested in not in its most basic, story-reliable fashion, but in how it gets altered through the course of this run.

Gruenwald’s brief stint is the most significant, the big twist if you will. I will be fair: there is nothing wrong with his use of English; Marvel never hired genuinely incompetent wordsmiths until the 90s. The first major content issue is sexuality, specifically the character’s, relative to what I am forced to interpret as the author as an active … participant. He bum-rushes the boyfriend character outta there …

… puts Spider-Woman into a medicated condition relative to her pheromones (I use the term loosely and elbow my biology self in the eye as he tries to talk), and then here come the gals … oh GOD, cover my eyes for that fight scene with Nekra … anyway, I’ll let some enterprising M.A. candidate dwell on that and turn to the other major issue.

Abruptly, the character’s plain competence nosedives. Her heretofore top-tier venom blast becomes an itchy little zap which – get this – she can use once and then it takes an hour to recharge. She’s stumbly and gormless and confused all the time, and the fights become simply embarrassing. This is also the writer of the Official Handbook we’re talking about, and thus it’s a defining image far more so than merely a few issues would indicate.

Fleischer’s stint is banal but completely adequate, all about the manipulator staging misunderstanding fights, sort of an in-story stand-in for what the author was enjoined to do at Marvel at the time. He’s quite horrible to the male lead character, poor wheelchair Scotty, who needs a post of his own sometime. Anyway, Fleischer stayed with her incompetence, keeping it in Gruenwald’s mold.

This ongoing limitation to the character’s effectiveness is very different from the heroism issues I wrote about in Superhuman endurance. I’m making the case that the superhero women of the 70s were underwritten but generally competent, whereas the 80s ones are overwritten and incompetent. Competence is a wonderfully fluid variable in superhero comics, including many dials to spin: crippling moral uncertainty, amnesia and twist-revelations about the past, physical fatigue and response to injury, curious vulnerability, to being sneaked up on and drugged/bonked, uncertain and unreliable powers, unexpectedly powerful “how can he withstand that” male foes, and the oldest standby, fight-affecting coincidences. All of these are fine as minor features or occasional nuances; when they provide a steady hum of plot-significant, even plot-defining input, then we’re talking about a character in whom the writer simply doesn’t believe, no matter how much flak the incidental prose throws about how awesome she is.

If I have to suffer, so do you

DeMatteis’ brief run is kind of a delay or blip; it returns to the Wolfman model of the bounty hunting, strikingly weird villains, and at least an understandable limbo of “who am I.” She becomes competent again,  or better anyway. There’s also a striking inclusion of grown-up sex although not for SW, starting with her barging in on Scotty as he’s jerking off (seriously – again, oh my eyes!), and at least worth a mention, Marvel’s first out-lesbian incidental character, an unnamed bar patron. 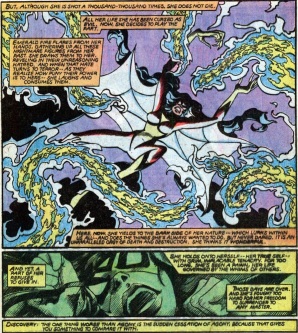 And then Claremont’s year-long run arrives, and man alive is it ever Claremont. Credit where it’s due, the vocabulary, grammar, and general erudition jump up a quantum; I enjoy his usual paragraph captions about this-or-that real-world building or geographical feature that figures in the story; and he does justice to the California coast both geographically and culturally. I won’t even crank about his endless explanations for what’s going on; he’s not alone among comics writers for that. But his idea of the empowered woman never fails to amaze, in two parts.

The first is right out of the deeply-compromised Ms. Magazine and Gloria Steinem’s uniquely bourgeois notions of liberation – the TV ideal of what it must be like if you don’t really have to work for a living. There’s the hipster crowd in the loft apartment, all the models and theater people having their cocktail party, hanging out and schmoozing and hooking up … it’s kind of cool until you see it’s unrelentingly leisure class, idealizing sincerity and “finding oneself” in the context of astonishing consumer-superficiality.

The second part of Claremont female competence is incredible multipolarity among “I am the mistress of more power than you can imagine!” “My power drains and stuns me!” and “Jeepers my power does not work this time!” It’s superpowers as troubled orgasm, and that’s not snark or sly or even subtext, it’s plain text.

You put these together and there’s the new stealth-incompetent Spider-Woman: hell against goons, accompanied by much text about how good she is in either first or third person, but all the major foes just go “unnhh” and she goes “I hit him with enough to fell a dozen men, how can he still be standing?”, and all the uncertainty/what’s going on centered on mysterious powerful female villains you can stand. With one or two victories thrown in to keep things confused, and enough unconvincing buddy-buddy sisterhood to make you want to hide the knives.

Finally, there’s a full creative team change-up, with Nocenti writing, illustrated by Brian Postman, and to my eyes most significant, Mark Gruenwald replacing Denny O’Neil as editor, for four very average issues culminating in the hero’s editor-mandated death. I see their content as simply winding the title down in reference to that mandate and no real reason to dwell on it.

The prevailing narrative of the depiction of women in comics is backwards. This isn’t an ascent into empowerment from the hell of sexism and objectification. It’s the opposite. The 70s women were empowered, and don’t mix that up with self-actualized or happy – they’re not the same things. They were written with much ambiguity and incompetence and uncertainty [clarification: those terms are directed at the writing] about that power, yes, just as the better male characters were. They raised questions about what an empowered woman would be like or might want, questions which have vanished and even become taboo. Spider-Woman shows me how that process of erasure worked, and I give some credit to the character concept that every so often she struggled against the tide, the fundamentals battling with the plots. No wonder they had to kill her.

Links: Nowhere / No formats (a blog piece on the Gruenwald phase)