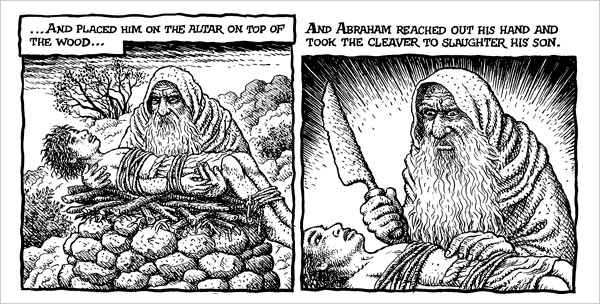 If anyone had suggested in 1968 that Bob Crumb should be drawing the Bible, they’d have been laughed outta the joint. But really, it’s a lovely match, and The Book of Genesis Illustrated by R. Crumb is a treasure. Let’s do some context for talking about it as a comic.

Looking here at the Tanakh, or Hebrew Bible, the first section is the Torah, or the Five Books of Moses, or the Pentateuch: Genesis, Exodus, Leviticus, Numbers, Deuteronomy. (The other two sections are Nev’im, or Prophets, and Ketuvim, or Writings.) The Pentateuch’s five books aren’t really five books at all but a mash-up of many documents to “make” five. Its documentarian breakdown is non-controversial: 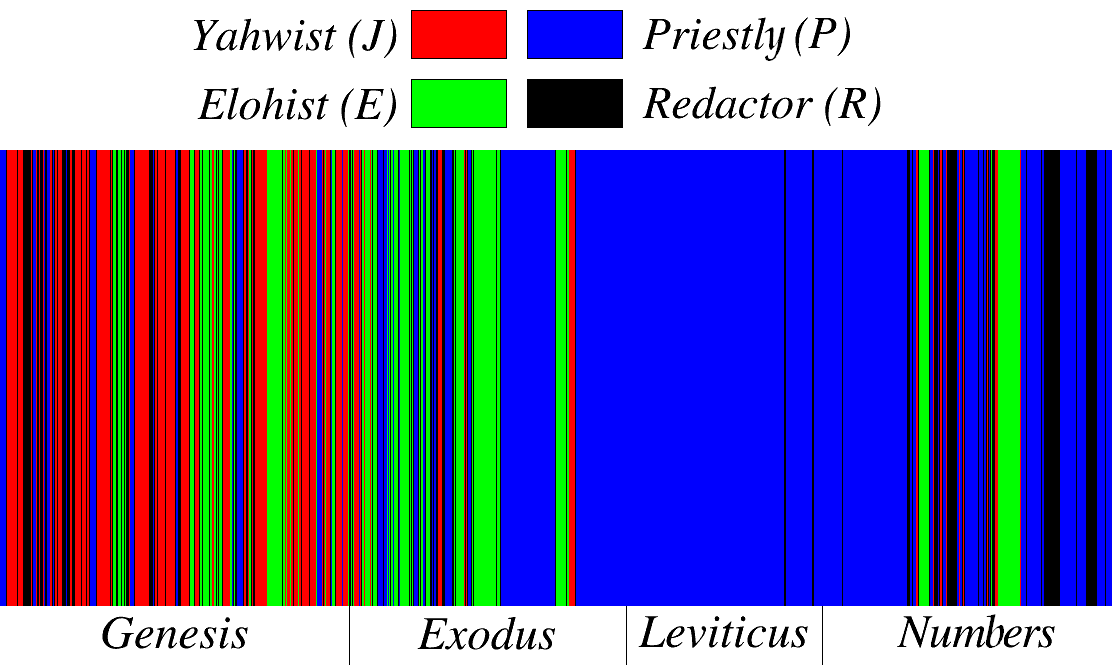 Scholars differ on whether the respective letters represent actual specific “chunks” of document composition or merely identifiable trends in scattered and ongoing composition and inclusion (the fragmentary hypothesis variant). What’s most controversial is the dating: most scholars of this stuff are religious and consistently back-date as far as they can, associating, for instance, content about Moses with the presumed historical time of Moses. My own jaundiced outlook leads me to side with contrarian texts like Thomas Thompson’s The Mythic Past, in which the contributing texts are considerably younger than the dates you’ll currently find at Wikipedia, and the compilation anyone would call a “book” is as recent as 140-37 BCE, i.e., New Testament times, and therefore not particularly ancient relative to it.

Therefore the “Bible” in its literal titular meaning, “the Book,” is a physical and institutional artifact far more than it is, or ever was, a “book” in the sense of a text that you actually read. You can see from the documentarian image what a jumble the initial parts are, and my aforementioned jaundiced view is that Genesis was included mainly as an “lookit old stuff” legitimizer for the Priestly contributions in the service of the Maccabeean governing priesthood in alliance with Rome.

I’ll continue with my heresies in suggesting that the internal textual content of pieces like Genesis has been of no religious interest at all except for occasional political cherry-picking, and instead, that “What the Bible says” is at all times an institutional device specific to its own historical period. Such periods include post-Christian Rome (what you probably call “Byzantine”), the Rabbinate during that period, Roman Catholicism (bearing in mind the Vulgate is a later text), the Reformation and its associated wars, and the European 19th century, among others. Modern fundamentalism, although a blip in comparison, looms large in our personal perspective. None of these “what it says” meanings had or has any use for the internal, unabridged textual content, particularly that of the messy and stitched-up Genesis. The content is always universally downplayed and replaced by pedagogical substitutes. (You know this clip, right? Actually, yes, it is a weapon. You’re not supposed to read it.)

All of which delightfully makes doing Genesis as a comic all the more fun and useful. Reading it outside a “what it means” context (whether to obey or to rebel) is a new experience for just about anyone. Even considering it “a thing” in terms of beginning-and-end is a bit borked, i.e., acknowledging that multiple and layered authorship doesn’t invalidate it as a story, it certainly raises the question of whether it’s a story at all. Therefore putting it into, arguably, the most effective “narrative communications” medium possible, yields something special.

Crumb’s incredible merit bears no discussion – I nod toward it here, briefly, only to say that whatever I say about the art’s effectiveness, go ahead and amplify it astronomically, exponentially. For instance, the detailed humanity in every characterization as he goes, as he a reader, figures they might respond. Every reaction in the moment is apparent, for main, supporting, and incidental characters alike. I’m fond of Joseph’s interpreter, who  doesn’t know Joseph understands the Hebrew he’s supposed to be translating for him. Many of these are simply beautiful, and I appreciate that they represent “what Crumb feels people might be feeling” rather than direct text – his interpretations become teachable moments, e.g., how does Isaac react when he realizes why his father brought no sheep for the sacrifice, and how does one’s answer, which might not be Crumb’s, affect the (or rather one’s) meaning for the passage? (For a less favorable analysis, see the Hooded Utilitarian.)

There isn’t any massaging of the text: it’s presented with all its hitches just as is, making duplications and insertions startlingly apparent.

I am especially impressed by the richness of stuff that’s otherwise passed over in textual reading. The begats are actually interesting, and since the place-names are mapped, you can see the point of including them as it’s all about what group of people has gone to colonize what region. I’m not too interested in it as actual-history so much as what the textual contributor of this material wanted to institute as history, i.e., probably working backwards through known lineages to hook them together in the beginning.

What about the parts that aren’t fragments and obvious interjections? Even given the somewhat-contradictory duplications, is there a story here? Maybe. It’s definitely not a “novel,” especially in isolation from the rest of the Pentateuch. And what’s there, perhaps best described as a family saga, it makes most sense when considered entirely out of context of the retroactive Abrahamic tradition.

That latter statement probably seems ridiculous – is it not a story of a lineage and its sequential encounters with God? The trouble is with how various and weird God is. For one thing, forget monotheism – there are obviously lots of characters which have been potato-mashed into a retroactive fantasy thereof. You have Eloi, Elohim (yes, plural thereof), YHWH (Yahweh), El Haddai, and more, who have grossly obviously different priorities, with no indication at all that these are the same character except that the Redactor author(s) say so. In this case, Crumb’s depiction downplays the diversity of the divine characters and voices, as it reinforces a single-character reading. But for my part, I’m gonna say there’s no way to read this and to take “God” as a throughline active agent particularly seriously, as opposed to reading what’s there and seeing a whole boatload of rather standard mythological agents ranging from grand to mischievous to deranged. In that context, the story isn’t what (the) God wants or even what God is about, but rather, what people do when they feel helpless before a supernatural being/agent’s will, or maybe that they reach for such a will when they feel helpless before other things, and one another.

Furthermore, I’ve found throughout my life that when people say “Genesis,” even very religious “I read my Bible” people, they pretty much mean the first ten chapters. 1-3 is origins, i.e., Adam and Eve; 4 is Cain, which is fragmentary and unfinished; 5-ish -10 is a mash-up of apocalyptic fantastic stuff, like the Flood, the Tower of Babel, and the Nephilim, with the first doubled and beefed up by multiple authors (however, not enough to make Noah interesting), and the latter two in very fragmentary form. When people know even these few, they always reference only highly selected and specific bits, adding the Abraham-Isaac sacrifice, cherry-picked from a few chapters later.

But they know little if anything of the rest, which is more than three-quarters of it, in which the events and “plot” sometimes include God stuff , but, especially after the commanded sacrifice of Isaac, are mostly plain-and-pure people stuff who make decisions in moments of family crisis. I’m talking about the throughlines of Abraham’s later life, which is to say Sarah and Hagar; Isaac, which is to say Rebekah; Jacob/Israel, which is say Leah and Rachel; and Joseph. A lot of it is dramatic but more intriguing or disturbing than uplifting or instructive. Some of the characters are plain shitty, and some are weak, and the outcomes don’t really have much “see, God was on your side, your faith paid off” weight. The repeated conflicts are non-abstract, harsh situations, concerning status and hostility between siblings; the exigencies of having to travel to live; fear of a local ruler regarding one’s wife; maneuverings of women regarding marriage and fertility especially concerning barrenness; and periodic famine.

Jacob/Israel’s life is told most completely, detailed in separate conflicts through all phases, albeit muddled through duplicated passages with different details. For the guy who gets this much attention, arguably the “main character,” he’s also the least likeable of the bunch: consistently hesitant, fearful, deceitful, conciliatory to a fault, pushed-around, and passive-aggressive.

I’m a bit disappointed in my webcrawling to discover that commentators go on and on about Crumb’s raunch, as if he’d ramped it up in some text-inappropriate way, when, well, the source material is unabashed raunchy stuff. I actually think he downplays it considerably. There is a whole lot of sex in there, most of it explicitly lacking in virtue by the standards of any/every culture. A lot of it concerns women making sure they conceive in some advantageous way, whether by tricking high-status men, or competing with low-status concubines, or colluding with a husband or lover against their father. Getting your dad drunk to have sex with him, bed-trick switches on your husband who thinks he’s marrying your sister … it makes The Canterbury Tales look PG, and even in text-only form I have to squint to remind myself it’s not some racist tract about degenerate hillbillies. Like I said, I think Crumb keeps it remarkably clean.

My completely selfish view, ridiculous of course, is that I’d like to see the whole Pentateuch done this way, for the sake of my own and future generations’ reading comprehension if nothing else. At least Genesis is mostly JE, whereas Exodus is such an obvious P-compromised text – and in my opinion a rather vicious and negative one – that I’d like to see what would ensue.

Links: Hammer Museum exhibition of the work, excerpt from my book Shahida if you’re interested in my take on holy books, A serious romp through Graf-Wellhausen-Friedman documentary hypothesis