I keep saying that I’m not too interested in the current movies and TV series, but that claim is easily scuttled by the fact that I have kids aged nine and almost-eight. I have seen very little of the live-actions, but when it comes to cartoons, I’m catchin’ up fast.

‘Course, by “current” I mean within the past decade or two, so don’t expect up-to-the-minute review action here. The two shows they’re currently into are Avengers: Earth’s Mightiest Heroes and Teen Titans Go!, and here I’ll write about the first. By “about,” I mean how the show invokes stuff I typically write about in the blog.

It’s easy to get confused because there are a few Avengers cartoon series, and this is the one that aired for two seasons in 2010-2012. I don’t suppose this is necessary, but anyway:

If you were just wondering why that would be confusing, there’s a weird interplay among cartoon TV shows and big-budget live-action movies. Obviously there’s a tension between (i) working from the source comics and (ii) reinforcing the obviously commercially more-important films and their associated gear. It’s a rare moment for this tension to be productive, as evidenced in Batman: the Animated Series (see Wicked good), and this series hit it too.

I’ll restrain myself from gushing about the characterizations and plot, and instead, compare how the individual choices reflect the big-screen vs. comics choices:

This is not to say that the comics are always better sources than whatever might be in the current live-action movie, nor to say that if one goes with the comics, one must do so slavishly. Again, use Timm and Dini’s Batman as my gold standard for how the variables can very rarely play out. In this case the series fell into kind of a time-shift between the success of the Iron Man films and the startup of the Avengers ones. (and note that the cartoon series which followed is very much a junior-partner reinforcer of the movies)

Readers of the blog know my next point: that it’s not just about characterization, but that the final work is only as good as the bad guys. I’m guessing Christopher Yost and his fellow creators knew they could refine the villains I just mentioned from their variously brilliant-or-borked fifty-year histories into best-foot-forward versions too. Given that the villains are the real plot-drivers, that’s exactly the key to what Stan Lee and Avi Arad have been telling people could be done for cinematic media for decades, and exactly where most of the attempts floundered badly. Here, they nail it.

But when you take it to Doom, you find that he is too much gun. There’s too much humanity in there and too much genuine, real-world relevance. He’s all or nothing. [The Fantastic Four movies to date have demonstrated this all too painfully by pumping effort into achieving the nothing, a.k.a., they shouldn’t have bothered; the only exception is the 1994 film as I wrote about in Joseph Culp.] In this cartoon, the creators understood this issue flawlessly – and since he couldn’t be the all, they chose the only working solution for a series of this kind: that he’s the hero of another story we don’t see. 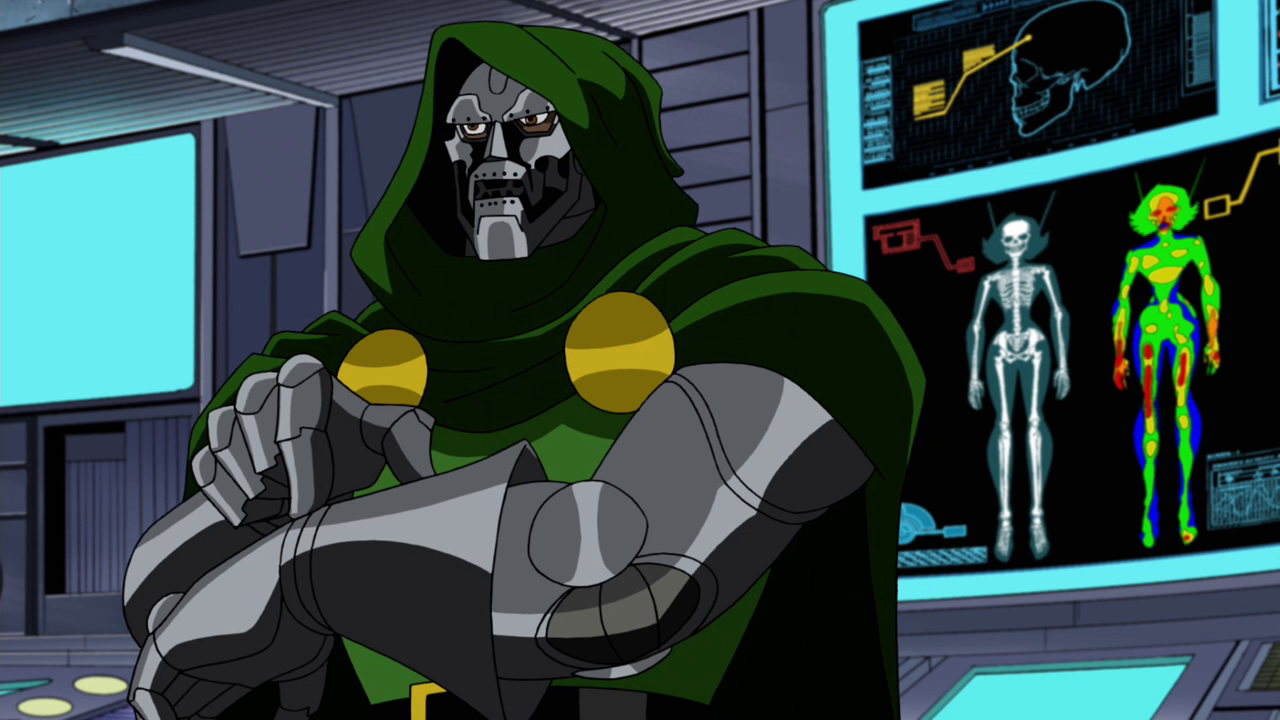 Since it’s not a primary plot point like, e.g., the Cosmic Cube + Red Skull + Bucky story, I won’t mind blithely spoiling away. The second season’s largest framing device is the Kree-Skrull war, with the key element of many characters being replaced by the latter side. The season opens with “The Private War of Doctor Doom,” scripted by Yost. It includes a Fantastic Four crossover, in which Doom does villainous stuff like capture heroes and run tests on them. It ends with him scuttling the expected showdown by letting everyone go, baffling the heroes, but revealing to the viewer that Doom is aware of the Skrulls and is conducting his own investigations and research about their replacements. Much later, at least a dozen episodes in and maybe more, after an immense tangle of who’s-a-Skrull and much Captain America angst (for which, see the primary plot point reference above), the Avengers receive a surprise gift of some useful technology which proves very helpful in their efforts, courtesy of Doom.

That’s it. No more Doom in this show. He’s the one villain who is not trivial (the plethora of career crooks and thugs), nor institutionally evil (Nazis, Skrulls, Kree), nor a cosmic psycho (Loki full stop, Galactus in effect if not motive). They get him absolutely spot-on: national ruler, casually amoral, powerful and prepared, not quite invulnerable but able to fight through tough moments, outright bored with heroic standards and tropes, neither arbitrary nor sadistic, and above all, up to something. He’s self-involved to a fault in not telling the heroes about it, but he acts in their interests nevertheless because in this case it’s his interest too. Significantly, although the members of the Fantastic Four talk about his rivalry and obsession with Reed, Doom himself displays no evidence of it whatsoever. In fact … none of the standard “this is a villain” techniques I described in Bootin’ the pooch are present for him.

I’m calling that a historical moment. The heroes are labile, easily re-characterized based on this or that comics moment or even entirely re-done for present purposes, and all the more so as Marvel glimpses the realm of DC in its franchise status. But the villains require more thought – as with the comics themselves, sure, go ahead, use the old name for another concept-and-characterization entirely, as with the Batman cartoon’s brilliant Mr. Freeze. But original or new, the villains must be good at it or the whole thing fails. And for some, the essence of the original is so compelling and as-yet not fully delivered, and so many other characters have piggybacked on him to hit status, that “new! concept!” is merely insulting.

He’s one of those few, is Victor von Doom, and likely the best. We know he’d “work” because he’s done so by proxy so consistently already. Comics fans are always gushing about how this-or-that character should or must be this-or-that in a movie, and thus far, I have tended to stay pure to my nasty little paper pamphlets and not think they must be redeemed by appearing in moving-visual form. But I confess this episode brought out the worst in me – yess, yessss, cast Culp now, in his fifties, as Doom written solid, without fear and truckling. In a story with meat and bite. As the title anti-protagonist … no more nothing, let’s do the all.

Next column: Context Too (February 19)