This is a tribute post to K.C. Ryan and a reflection on his superhero group the Four Aces. You may be surprised to know it’s not a role-playing post at all, and part of the reason I’m writing about it is to investigate why not. If you haven’t seen it yet, you can check out my earlier post K. C. Ryan. 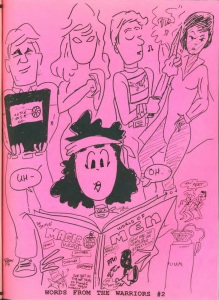 Aside from inhabiting the not-very-constructed, casually and operationally defined “K.C.-verse” in which he set the games he ran, many of which had been inherited and were continuing in various places around the country, and aside – I think – from some occasional references and cameo appearances in the Forte game … the Four Aces existed primarily in his prose fiction and in his artwork.

With the permission of Mike and Tim, and without further ado, here are the three stories he included in The Clobberin’ Times issues during my time on it. I don’t know if later issues included more.

I will include the second story into this post if people are interested, and I’ll have to get hold of CT #24 some time. 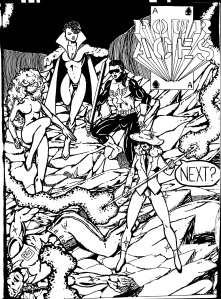 The group is set in Portland, Oregon. At first glance, the characters are extremely basic with no effort to be original in their powers or to mess with the “these are superheroes” tropes. Streethawk is a cycle-riding sword-wielding crime-stopper who fights gangs and similar neighborhood problems, with a few unsubtle implications that he’s the reincarnated Lancelot (real name is Lance Champion, bad luck with women, Merlin lives in his motorbike). Maelstrom is a woman who flies and wields weather powers. Golden Man is a handsome, strong, gleaming, charismatic nice guy. The real bruiser among them is Ghost Girl, who teleports around, walks through walls, stands or sits on ceilings and walls as if they were floors, and beats the shit out of everybody. (K. C. mildly pointed out that he’d conceived the name Four Aces and the character of Golden Man well before the Wild Cards series appeared, a common coincidence that anyone familiar with comics and gaming is accustomed to.)

However, at second glance and right away from the start of reading the stories, they are also deeply non-generic. There’s a certain refutation of a lot of standard superhero things in these stories which I find provocative, and in which I sense K. C.’s frustration with both of the two media, physical comics and gaming. 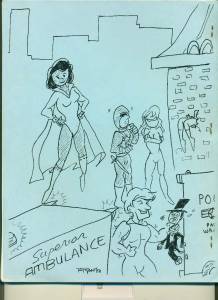 The first thing is that they are working superheroes, in several senses of the word. In one sense, they take the actual villain-stopping seriously as personal tasks and responsibilities, so they routinely investigate things and generally say “what shall I be doing as a member of the Aces today?” They do these things in the context of the civic municipality, staying in contact with the police and close to the communities they live in. The citizenry likes them but they are not celebrities; Steelhawk dislikes his over-glamorous media reception and tries to minimize it.

This is most evident in that Maelstrom inherited her super-role from her mother, former Windstorm and first black superheroine, and treats it as a legacy and an identity, and that Streethawk regularly patrols in the sense of community-identifying law enforcement, not a dark avenger of the night prowling around in the grip of neurosis. They may be self-employed as supers, but they are definitely working at it almost exactly as a startup, and its lack of direct financial reward is a primary reality in their lives.

Related to that, they’re not wealthy or high-status people, and this is called out as counter to public expectations at several points in the stories. Jessica Bailey (Maelstrom) is the best off as a middle-class black woman, a high school science teacher who owns her home. Streethawk, as Lance, has his hard-scrabble repair garage, with no employees besides himself; an otherwise insightful investigator speculates that he must be famous and wealthy. Lou Carson is straightforwardly a homeless guy, with one of the story points being that as a golden-gleaming, friendly, respected superhero, everyone assumes that when he’s not saving the city he must be fine and have a normal life to return to, when he actually is ragged and alone (although not agonized, partly due to … origin stuff). Ghost Girl is a bit too weird to describe in this way as her name is literal; suffice to say she has no glamorous mansion or social position. Their headquarters is merely a concrete-floor basement at Lance’s garage with a dorm-style cube fridge; at their group meetings, they eat pizza out of the box. 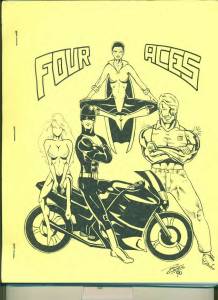 Although all of the above are important realities for the group, they’re not whiny and miserable either. They present an image of regular-people heroes, working at their live and working at their heroics, showcasing a certain rather refreshing idealism that, yes, this woman or that guy or you, given super powers, could in fact be a comic book hero. If you consider the unfortunately embedded image of Peter Parker as a perpetual butt monkey, never catching a break, always crap at superheroing and crap at regular life, then the Aces are the counter-example. What they do is tough and requires attention, effort, and sacrifice, but they can do it. It’s the one series, or putative series, about the “not the toughest around group” that doesn’t play the characters up as mouthy losers.

K.C.’s frustration with role-playing and comics too is well-articulated in a number of his CT contributions, and I think I can paraphrase some of it pretty well: that hardly anyone considers the story power of, say, the 1960 Flash or the 1968 Spider-Man, as a guy in this world whose super-problems and person-problems are both social problems or at least completely understandable in the larger social sphere. And especially no one seems able plain to write more of that, non-ironically and non-meta, with a different person in a different place. The economic, geographic, and ethnic differences are not just “skin” – taken seriously, they yield entirely different stories.

I think that’s why a number of standard super-tropes are retained in the Four Aces stories, like the costumes and crime-fighting, partly out of genre love but especially because it’s holding specific things steady in order to highlight and develop other things. I find that even more powerful right now than I did twenty-plus years ago. K.C.’s not undercutting the tropes either by over-emphasizing them or by rendering them “dumb” either psychologically or logistically, but he’s also not letting the tropes’ presence be the story. Here are the features that help the goal to work.

The Four Aces exemplify their ideals and goals through action, rather than preaching or explaining. On a related point, their origins are occasionally relevant to the problems they face, but are not treated as incredibly tantalizing mysteries strung out forever or as an endlessly-repeated canned sequence.

They face no fictional social rejection, or for that matter, no overriding crisis, either of which would convert their problems to a “drop everything, face this entirely fictional Threat to All We Know instead.”

In terms of powers, there isn’t a shred of meta or PoMo to be seen. None of them has “story power” powers like time-travel or mind control which undercut or rewrite problems, and none of them are even close to invulnerable. They have to be careful and fast, and when they get hurt it’s a little comic-booky, but fatigue and emotional exhaustion are present along with every physical injury.

Finally, no surprise to the regular readers, regarding that most important variable: they face valid and relevant adversaries. The lesser baddies aren’t all that interesting, but Summer Silversmith and the Dreamweaver are obsessive, fully present villains, people of great ability and even certain understandable ideals, and whose primary flaw is a lack of empathy. In Summer’s case it’s nuanced and in the Dreamweaver’s it’s not, but the problem is the same: fine-grained or coarse-grained sociopathy combined with intelligence and unusual perspectives. I also like that they don’t wear operatic costumes, but rather eccentric clothes that reflect their obsessions.

You see how this works? K. C. was writing comics, not commenting on them via themselves or throwing twists (real or putative) to change them up. He did it in prose because both comics and gaming were apparently shying away from doing any such thing at that time, and I think he was correct in saying so.

One might think that K.C. would post Champions versions of the characters; I go so far as to say that any other Clobberin’ Times contributor would have done so. However, to the contrary, he stated flatly that he would not do so.. “I know what [Ghost Girl] can do.” This is a tricky concept – by the logic of gaming, that’s all the more reason to be able to write up a character, not less. I heard the same thing from comics creators all the time, during this period. Although you can see from my Medium and idiom: they fight crime! and to What does this power do? posts that I don’t hold that position exactly, I do see why they and K. C. said it. Much about hobby culture, RPG texts, and comics fandom is structurally opposed to genuinely creating stories of any kind, as opposed to pantomiming them. I agree with the comics creators and K. C. more than I disagree. I know that if my aim is to write stories, myself, then I have no need to “stat” the characters and indeed find the idea annoying. But I also think role-playing can be a working story-making medium for those so inclined, and that K. C. and the Forte group did achieve that – almost without realizing it.

How that works, I think I know. But talking about it with almost everyone I know is a lost cause.

Next: Who I am