Here’s the follow-up post to What you mean “we?” and probably a lot more emotions and memories than you care to deal with.

I’m writing about the character’s original appearance in Eclipse Magazine #2-8, written by Steve Englehart and drawn by Marshall Rogers, then collected in 1981. Englehart would go on to write a variety of Coyote stories at the Marvel Comics’s creator-owned line Epic Comics, arriving eventually at 16 issues with such artists as Steve Ditko and a very young Todd MacFarlane.

The entire run is now available from Image, which I suppose wraps up the entire 80s creator-owned publishing fiasco into one deceptively-unified package. It’s a whole lot of jumping-around constantly-retrofitted, sometimes utter-detour spectacle, sometimes infuriating and sometimes fun depending on my mood. Reading it is like surfing both the ebbs and flows of working with different creative teams on a still-evolving and inherently shifty concept and the forced starts and stops of being able to publish it at all. The art is so varied there’s really no way to say which ones I like or don’t like; it’s almost more like a tapestry of differences to enjoy as such. I still like my Eclipse collection of the Rogers run, though, because it’s magazine-sized, 8″ x 12″, which brings the astonishing art into full-field viewing.

Here’s what I wrote in the previous thread, as a mere taste.

The coin might show its other face with I Am Coyote: a confirmatory and exciting book for me in the early-mid 80s, speaking of the collection with the depicted cover, by Steve Englehart and Marshall Rogers. It’s best described as more sex and tripping and gore against the establishment than a Native American hippie blend could hope to bear in one spot, as written by two white guys with lysergic acid diethylamide possibly deserving a co-creator credit. It’ll get a whole post of its own with some relevant autobiography, including why the incredible self-indulgence of the whole thing was a plus … uh, for me anyway. I could see why someone else might recoil from it as strongly as I do from Thunderbird and Warpath. It’s the whole Hippies & Indians yes/no good/bad respect/appropriation issue in triplicate. It spoke hard to me on a number of levels in part because of its confusion, and in that it comes down barely on the right side of that line. 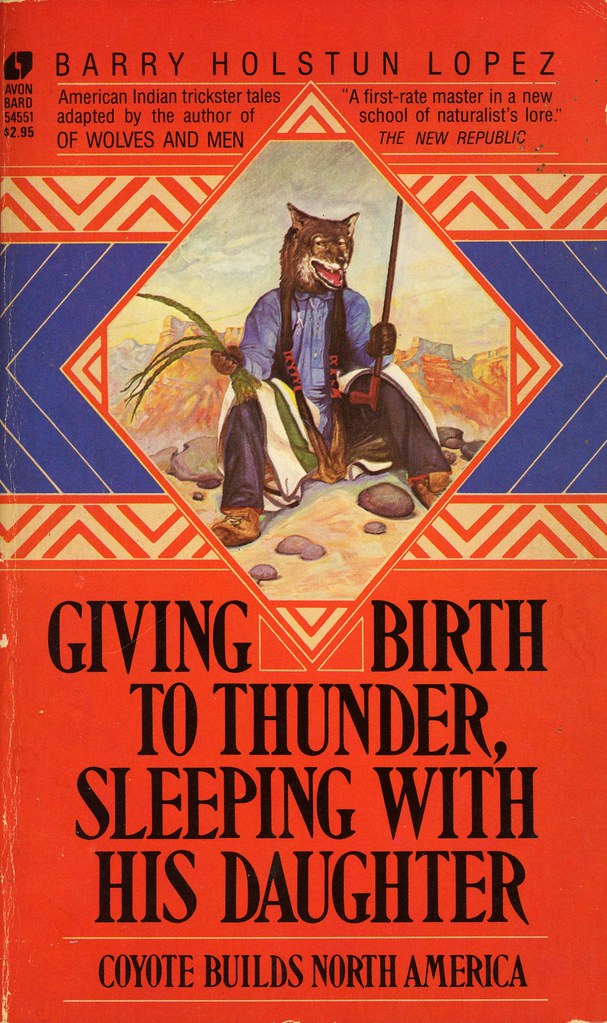 It may seem impossible for a 60s-70s kid, but I grew up steeped in (as we called it then) Indian stuff – not from movies, but from activism and politics. A big part of that came from Camp Unalayee, and as I got into my mid-teens, Gary Snyder, the only Beat I liked, well, OK, Ginsberg too. But Snyder wrote about places and ways of life I’d actually seen and done. I don’t claim actually to have contacted Indian life in any experiential way, but I knew real people from that world and I knew what they cared about.

I don’t even know how to describe what I call “camping” to you. It’s pretty brutal – topo maps, striking off-trail, no tech, eating minimally augmented with what you catch, serious mileage punctuated by long lazy layovers at the lake you chose. You’ve heard of the Pacific Crest Trail? I was hiking deep in the Trinity Alps and hearing them blast it into place, in 1978. We considered the PCT cheating, and when possible, stuck to the older trails.

That was camp, but there were also our yearly horseback family trips in the Sierras. I knew how to ride and how to take care of horses, and what it was like to

This became a weird head-space in the mid-late 80s, from age 22 through 25. I was out of college now, living very urban in Chicago, collecting my paychecks, and the disconnects were growing among my view of life, my experiences of life, my impending student-loan debt (laughably small by today’s standards, but it seemed huge then), and my ambitions toward grad school and real science. Turtle Island shrank, replaced by streets, women, the blues, and monkey skulls.

But I shifted back and forth. A lot of the hitch-hiking I described in The orgasm that saved the world was for camping excursions. I preferred wilderness areas, those least owned and maintained. I would usually buy final supplies in a local outdoors store (this was before they were upscale chains) and ask a few questions about a given area, then disappear into it for a week. Whether contouring the Continental Divide in Colorado or roaming up and down arroyos in the Superstitions, I’d hike myself stupid, find odd little lakes or vales on my map, get naked in the spring and snowmelt water, read the paperbacks I’d brought with me, and bed down in utter obscurity, location unknown to anyone in the world.

I went seriously minimally equipped: no stove, no tent, just an army-surplus poncho, a tarp, and some rope. Bad weather was a gamble with death – if I couldn’t stay dry, I’d get soaked, and if I got soaked, I either had to keep walking – all night if necessary – or find enough cover to make a fire armed only with a knife and matches. I learned to love sunrises.

Good ol’ boy rednecks were another gamble – they might get curious and end up talking about evolution into the small hours over a glowing fire, or they might follow me, staying at the same lakes and shooting into the air all night. Conversely, I’d meet confused and unprepared people who evidently didn’t know that “wilderness area” meant “rangers will retrieve your body eventually” and help them find their way out. After a little while, every person seemed odd to me, speaking from some place inside their head which was clearly addled and couldn’t see out very well. Or imbued with some individual perceptive glow that I needed to learn from.

Coyote was my book then, specifically Englehart-Rogers. I bought the collection sometime in the mid-late 80s. It’s a work of unbelievable art, just astonishing. The visuals go everywhere they need to, however they need to, from two-page close-ups to multi-panel mazes, not once letting the reader drop, combining color and zip-a-tone in a fashion I really don’t think I’ve seen digital media match.

There’s plenty of this sort of thing in it too, presented here strictly for appreciation of Rogers’ masterful panel layouts and composition, I assure you.

Also, if you’re still feeling uninformed after all these months of reading this blog concerning just what the 70s were about, this little NSFW ought to clear it up. Hint: the terms “Brazilian” and “landing strip” do not apply.

I was really struggling to manage the primal aspects of life, now that I was living them completely on my own and without any sort of identifiable social scene to provide external judgments.

I’d discovered something about sex: that unleashing physically was important. I’d been baffled that focusing on “nice” and “sensitive” and “aware,” not to mention certain lingual skills, kept falling second place among women to some asshole who treated them badly. I didn’t want to go there, but I did start to  … let go of that need to please, to be approved of. It took a while to find the right balance, about five years of discovering how far being selfish or physically uncontrolled could safely go, and to bring the niceness back into it. These were those years.

Then there’s this whole thing about killing people with your hands and teeth.

My childhood anti-violence training was patently dysfunctional. I’d thoroughly internalized that violence solves nothing, that hitting and hurting were for people who couldn’t think, that nothing is worth it. I am not sure whether anyone really taught me this or if I just absorbed it in trying to fit in … and I stress that both my brothers were tough fighters, so I can’t really blame anyone directly. Strangely, I stood up to bullies all the time with the predictable bipolar effects of either (1) facing them down, which was most of the time, and (2) getting punched. But where I totally dropped the ball was the ordinary need to demonstrate to peers that violence was ready when it had to be – an absolutely crucial skill, which I did not have one bit.

Bluntly, I was a total pussy, and although this is a completely different variable, I was also unable to control crying (not starting; stopping) until I was … geez, almost 25, I think. Like many such, I was an avid Conan reader. It took a long time to realize that visualized bad-assery from that and similar source material, the barbarian I “just knew” lay inside me, was a dead end.

Conversely, I did grow up learning to shoot rifles and shotguns, but that particular sense of power has never clicked for me. I have never associated manhood and effective violence with firearms, possibly because it was irrelevant to those social situations in which ready violence was needed.

Adulthood requires that skill more than childhood does. It was clearer and clearer to me by the minute that  respect is rooted in physical presence. Although I wouldn’t learn to fight – and well – until almost a decade later, by the mid-80s, age 20, I found that simply dropping fear out of the picture was surprisingly honest and easy, and effective. I had missed out on most fears that prey on American white people anyway, which I credit with saving my life multiple times. I think I’ve already mentioned that I became a known “cooler,” to the point that people with genuinely violent or very-near violent domestic or roommate disputes literally called me for help. Pussy I may still have been, but a strangely non-victimized one.

I started to think about what I needed to do about this. Reading Coyote was the opposite of reading Conan; Coyote was savage, but he relied on cheating too, on being someone else, or somewhere else, or on changing his mind. It wasn’t ultimately my solution but it provided a better language for considering who I wanted, physically and violently, myself to be. By the time I did get into learning to fight, and thinking about it in retrospect, I was surprisingly well-prepared, mentally.

I was becoming grown-up and carving out a place for me in that world; badly-paid and overworked as it would turn out to be, at least it had a name. Still, life has always been in a foreign culture to me: anything I thought was right, normal, or desirable was a foreign language to everyone I knew, and more so as the 80s developed. I was odd even among Californians; the other ones I knew in the Chicago area had quickly leveraged their identities into functional quirks in a way that I couldn’t … Bay Area kids were more facile than I was.

An image kept me going. I thought of coyotes ranging up and down the forgotten waterways that interpenetrated urban life, even adopting the new ones based on drainage as their own. I thought of them collectively thriving in a scavenging, house-cat eating, dawn-and-dusk semi-urban existence, individually never giving up, dying unnoticed, interacting with everything, despised by some, intriguing others. The ideal shifted in my mind from the romantic mystical-groovy semi-Indian sex-and-spiritualist, into a life among the interstices, in contact with the world in known and unknown ways, neither in it nor alone.

Links: Notes from the Playground