The Big Bang: The Punisher, 1986-Present

The vigilantism, third in the me / Steve Long series beginning with Eat hot lead, comics reader and What was the questions, again?, continues with further Punisher talk from …

STEVE AT THE MIC

We left off in our analysis of the Punisher in 1986: the year of The Dark Knight Returns, the year of Watchmen, and most importantly for the Punisher the year of his five-issue limited series, written by Steven Grant and illustrated by Mike Zeck. In short, it was the beginning of the gritty, “realistic” period I think of as the Iron Age of comics, and Frank Castle was right there in the first wave, making me think about the subject of crimefighting and vigilantism in a way that strongly influenced my gaming and, eventually, my authorship of Dark Champions (1993).

As someone who was a big fan of the Punisher’s appearances in Amazing Spider-Man and elsewhere, I was excited when I heard about the limited series. “High time they gave him his own title!” I thought, eager for the distraction from college classes. Unfortunately the reality didn’t live up to my expectations. While the limited series at long last revealed the Punisher’s real name, otherwise I found it very disappointing. The storyline seemed disjointed at best and just plain bad at worst, and the Punisher didn’t really seem to be acting in character. The whole thing came across to me as having not been well thought out with consideration for the character — as a production driven primarily by marketing decisions.

But for better or worse, my recollection is that the limited series was quite popular — so much so, in fact, that it led to the launch in 1987 of the Punisher’s own regular series comic book. That series lasted until 1995 and proved so popular that Marvel published even more Punisher titles:

…plus a whole host of Holiday Specials, Summer Specials, Armories, and much, much more. For a good many years I snapped them all up, but by the early Nineties I’d gotten tired of them and basically stopped reading this character who was such a favorite of mine.

Why? Because in publishing not one but multiple Punisher titles, I think Marvel made an all too common mistake: they took a hero who was a fantastic supporting character and tried to make him the star of his own stories. And the Punisher is the sort of character who functions better when you don’t take too close a look at him. When he appears in Spider-Man stories he’s both ally and adversary, a mysterious figure who intrigues us as much with the questions he raises as with his actions. Once you answer too many of those questions, though, it’s hard to sustain the interest.

On a related note, I think they weakened the Punisher as a character by largely divorcing him from the established Marvel Universe. You could read dozens of issues of his titles and have absolutely no clue that he existed in the same New York City as Spider-Man and Moon Knight (never mind the Avengers and plenty of other high-powered superheroes). Every now and then someone — often Daredevil, in the role of antagonist — would show up, but that was it.

And what’s worse, the Punisher almost never fought supervillains. For my money that was a colossal mistake. They should have done with him what they eventually did with the subject of one of our upcoming columns, the Scourge of the Underworld:  let him, in his own book and in occasional quick guest appearances in other heroes’ books, shoot and kill any of Marvel’s legion of relatively pointless and unnecessary supervillains. He doesn’t have to fight supervillains all the time — in fact that would be just as big a mistake — but he absolutely should fight them on a regular basis.

Instead, to take the Limited Series and the first ten or so issues of each of his solo titles, he fought a plethora of “ordinary” criminals: a conspiracy of the rich and powerful trying to “end crime” in their own destructive way; Mafia families and goons; drug kingpins and street gangs; anti-US government militiamen; Muslim terrorists; evil cult leaders; corrupt Wall Street tycoons (one of whom was also a serial killer); a psycho putting cyanide in medicine (“Ripped right from the headlines!”); African poachers; an amoral sniper he knew in Vietnam. And he doesn’t just do this in New York City; he travels to South America and Africa, for example.

To make matters worse, the stand-alone titles virtually abandoned one of the best “gimmicks” for the Punisher: even the titular War Journal failed to use the “war journal entries” as a way of telling the story and conveying the Punisher’s thoughts and feelings. As a writer I can see why that might become tedious at times, but it really set the Punisher apart and I wish they’d kept it.

None of my quibbles would matter as much if the writing on these books had been better. I’m not saying it was bad, but it was… lackluster, I guess you’d call it. The stories held my attention well enough at the time (though I think too many of them depended on the Punisher making stupid mistakes he never would have), but after I read them I quickly forgot about them. I can’t point you to a single “great Punisher story” that I think you should read… 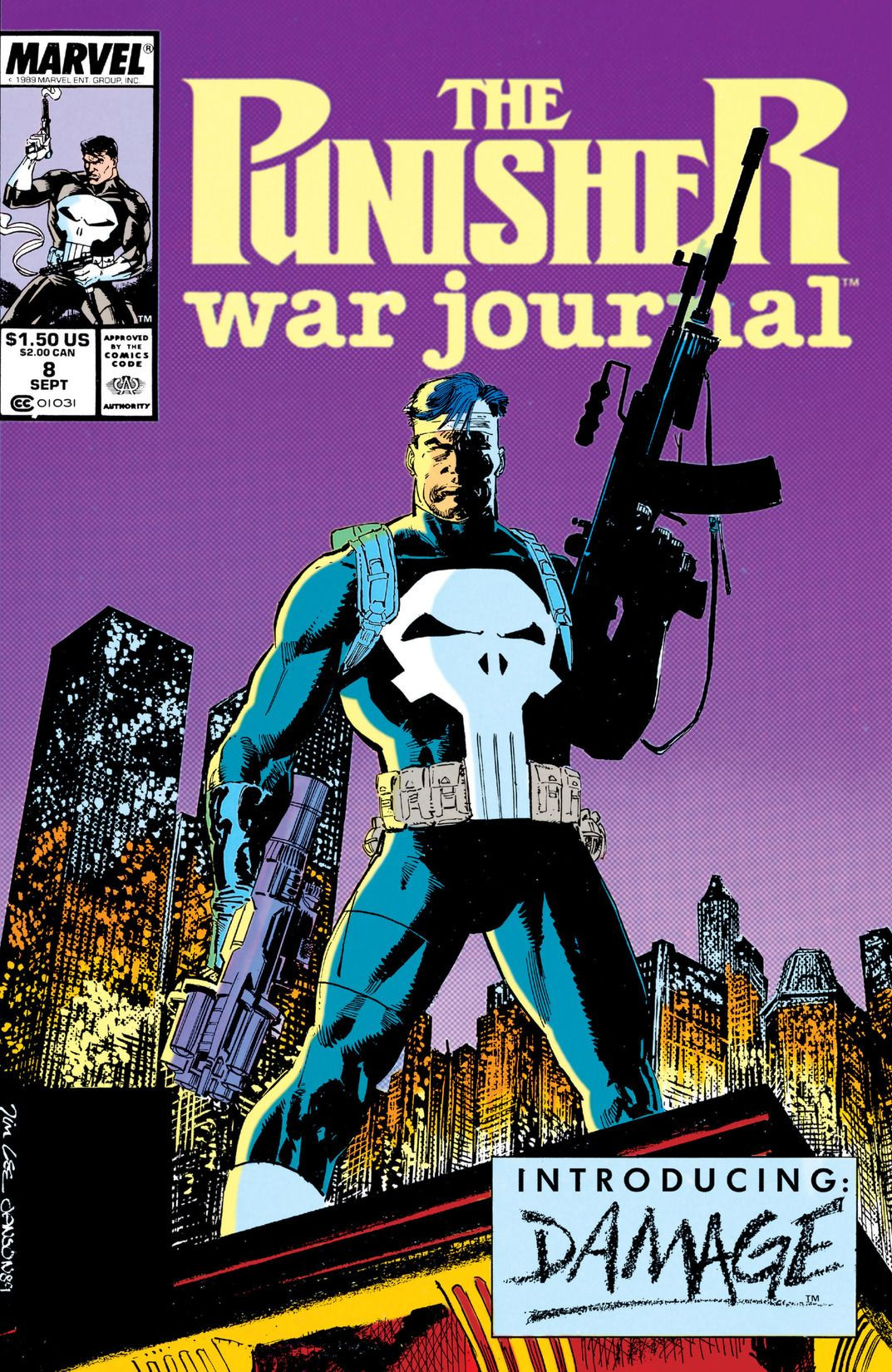 …with one exception: the magnificent story arc in Punisher War Zone #1-11. With taut writing by Chuck Dixon and Punisher-perfect art (mostly by John Romita, Jr.), it tells the story of the Punisher attempting to bring down a major mob family by infiltrating it undercover. Along the way we get the funniest torture scene ever, weird assassins hired from all over the world to kill Our Hero, a steamy romance leading to a crazy ex-girlfriend with a Mafia family at her beck and call, and plenty more. It’s a joy to read from beginning to end, and if you can only read one Punisher story from the early Nineties, that’s the one.

In recent years I’ve looked back in on the Punisher occasionally and have seen some not-intolerable things. In fact Volume 7 of The Punisher, written by Garth Ennis and published from 2004 to 2009, is a great read throughout. While it approaches the Punisher more as a soldier and less as a crimefighter than I’d prefer, Ennis for once takes his subject seriously and turns out some highly readable action-adventure stories. So perhaps there’s some life in ol’ Skull-Chest yet.

Now if only they’d hire me to write a movie for him….

We knew we’d be doing lots of different Punisher posts, but I didn’t realize just how much parsing the guy would require. To understand the late 80s Punisher – and why I loathe him – I have to turn the clock back a decade.

Part One: still talking about the 134-135 Spider-Man story by Gerry Conway.

In it, the primary villain is the Tarantula, who is pretty terrible as far as powers & look & plot go, but genuinely fantastic for political background. “Dictatorship” meant very different things depending on the speaker during the Cold War, and I suggest that Conway was savvy enough not to confound different regions such that “South American dictatorship” in 1975 can be none other than Chile.

Now for the (“this”) Punisher: he’s got the same hair-trigger on first impressions + ranting, with no Jackal to blame for it this time, and the same strangely non-lethal effect on bad guys he’s allegedly so ruthless toward. For example, the Tarantula’s goons, Juan and the unfortunately-spelled “Hildago,” do not cease to breathe in this story for no discernible reason. The opportunity to contrast the Punisher killing them vs. Spidey not killing the Tarantula is simply bypassed.

SM (while thoroughly kicking his ass): Sure I do, buster — You’re a first-class creep — traitor to your own friends. Men who were trying to free their people from a dictatorship — heroes whose boots you aren’t fit to shine!

This is, I think, what’s entirely gone in 1986 and going forward.

I like to divide Miller’s career into early grit vs. later grot, admitting that each has its heights of its respective thing. Daredevil 183-184 is one of the pinnacles of the former, simply outstanding gritty-supers comics. You couldn’t ask for a clearer transition for a single character: the Punisher’s nuances are brought forward, thrown into conflict, hitting their limits, and contrasted with Daredevil’s heroism even as that heroism is also brought to its limits … never mind the plot summary, just read the thing if you haven’t. Read it again if you have.

Daredevil, at this point, is about as far to the edge of what a “good guy superhero” can be, and written far better, in this regard, than Batman had ever managed (however, take a look at who Miller’s editor was to grab a clue about that). In perfect juxtaposition, the Punisher is about as close to a plain old good guy as he gets, as he’s after a particularly foul angel dust dealer and not, for instance, icing “Vito the Thumb” at a wedding or something. It comes down to the iconic moment of Daredevil armed with one of the Punisher’s guns as the latter is about to execute the perp. Notable too for arousing the now almost-moribund Comics Code Authority.

Strong as that moment is, though, this one provides the heart.

This is actually from the prequel in Spider-Man Annual 15, 1981 (O’Neil and Miller)

There. The depth is all there. He considers himself a law enforcement officer, and a member of the general social contract, the body politic. Millered-out badassery and all, this Punisher is still a person.

Excellent observations, Ron; I can’t disagree with any of ’em. I think in many ways that one of the problems you pointed out — not contrasting the Punisher with other costumed heroes — dogs his own books. And to some extent that’s because he talks ruthless more than he actually acts ruthless. Most of the stories I re-read for this article go something like this:

1. The Punisher begins investigating a criminal situation.
2. His activities are somehow exposed, people begin shooting at him, and he shoots back with lethal skill.
3. He makes a mistake somewhere along the line that makes the situation more difficult for him.
4. He overcomes these difficulties with skill, determination, and luck, beats the bad guys, and lives to fight another day.

You can re-arrange those elements sometimes, but they’re usually all there. What’s missing?

5. The Punisher ruthlessly guns down some criminal scum who’s not threatening him in any way.

That’s what we think of the Punisher doing, but what he rarely does, for the obvious reason that going too far all the time would make the Punisher less sympathetic to the reader. The writer conveniently arranges things so the Punisher acts in self-defense or is a soldier fighting in a war, not simply an assassin.

We don’t really see the ruthless vigilante, as far as I can recall, until the Punisher War Zone #1-11 arc I mentioned earlier. It opens with the Punisher gunning down an informant who’s literally groveling at his feet. Chuck Dixon keeps that up throughout the story, showing the Punisher stalking and taking down criminal operations with military efficiency. For my comic-buying dollar, it’s the first time aside from the character’s early appearances in ASM and the black-and-whites that we see him as he “ought” to be written.

But does that make for good long-term stories? Out of all the Punisher’s books, I can only cite that one story as being memorable and exciting to read. Some characters only work best as supporting cast, as contrasts to the main hero, and that’s missing in the Punisher books. Maybe that’s why Daredevil so often shows up as a guest star.

Next: Who is Coyote