To no one’s surprise who’s read The way underground, I’m generally a fan of excess. It interests me that this new “acceptable” kind of excess fit into a pretty specific of issues and human problems. Tons of comics expressed or dipped into it, especially at DC, but The Crow and Hard Looks seem to me actually to be it, especially since they included no comedy or satire. These and a lot of similar comics have led me to think about how the following two things interact.

A bit of history: there’s no actual beginning to it, of course; people have been drawing psycho-sick fascinating stuff since we could draw. In immediate comics lore, there’s the EC body of work in the 1950s, S. Clay Wilson as the obvious standout in the comix, and all things Berni Wrightson for sure. If there is a stylistic transition in the mid-80s, then it’s a stronger focus on short-story and cinematic structure which I associate with the old Creepy and Eerie, rather than the Wilson-mode of crazed “I’m drawin’ from one corner o’the panel t’every damn other corner I kin find!” in a terrifying blend of design-sense and detailed release (although that is never fully lost).

Considering the Vachss and O’Barr connection, you’ll see some overlap in this post with the ongoing series of posts about comics vigilantes I’m doing with Steve Long, but this one isn’t about that topic exactly, which is primarily political-historical. It’s about the stylistic-to-content variable, and I’ve got three titles in mind, partly because each includes stunning art, simply beautiful, and they provide varying examples of grit-and-grot imbalance to different effect.

Right outta the gate there’s David Quinn and Tim Vigil’s Faust (begun 1987), including its famous scene in #1, quickly much-parodied, with the drink-and-drug-addled woman puking up all over as her boyfriend fucks her from behind.

I’ll keep it quick: Faust involves an on-the-loose mental patient who’s insanely buffed, wears retractable metal claws, a “comedy” mask with horns, and sometimes a cape. Why? Um, something mob/corporate boss cultist leader guy something something experiments for super-assassin something demons occult something something unerotic unbeautiful sex and surprisingly gorgeously-drawn mutilation and evisceration. (PSA: it has nothing to do with Marlowe’s Doctor Faustus or Goethe’s Faust.)

I also can’t help but quote this exchange, which I consider the one really good line of the whole thing, probably not precisely as it’s from memory:

[the leading lady is being sexually-sadistically assaulted by her vicious ex-boyfriend; then the psychotic hero arrives and slices the guy’s dick off]

How is that even possible? Remember, I’m not speaking from disapproval of the grot, but rather from a desire to experience it to its most effective power for a given title. It seems to me that there must be a bedrock of grit down there, without which piling on the grot doesn’t work. Not one person having sex in the whole book appears to be enjoying it. Even all the butchery palls when every victim deserves it so richly. It bears careful comparison with Wilson’s work, in which a curious empathic or tragic or patently painfully-harshly funny element is almost always there. 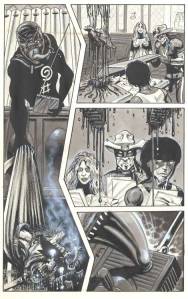 I might get some heat from targeting Rick Veitch’s Brat Pack (1990) for anything but praise. If it matters, I’ve only ever read the story as initially published, as I understand the ending was revised for all releases since. As you know (as they say), it concerns the exploitation of teenage sidekicks by a bevy of superheroes, who basically recruit them, burn them out, and eventually kill them over and over. The setting as a whole is a deranged but pointed distortion of the typical “superhero city” in traditional titles and the heroes are extremely recognizable expys for the Justice League principals.

Considered as parody, Brat Pack delivers in force – there is no better/savage skewering of Batman than the Mink, and even a starting list of such things would fill up a post. I say strictly as descriptor that the parody is only parody, not satire, built on pure and overwhelming contempt for its subject matter and, I think, for its audience. It’s a lot like the later Marshal Law became after the initial series, best described as Mad Magazine if Larry Flynt were the editor.

The grot, delivered as only Veitch can, reinforces this just fine, in the “oh shit I can’t believe he showed that” way. As fuck-you critique delivered to a fandom culture which voted to kill Jason Todd and was otherwise uncritically obsessed with bad-ass capery-toughery, it makes sense – and that’s all it does. I’m saying that the grit of anything else isn’t there … and tastes may vary I suppose, but as I see it anyway, the grot wears off fast and due to quite a bit of it, the whole story is easily twice the length it should be.

My third example is Joe Casey and Charlie Adlard’s Codeflesh, which I first read it in the 2003 black-and-white, and although its coloring in re-release is great, I like the original too and this way it makes for a nice shared aesthetic in this post.

It might be the single most-distilled portrait of the masked vigilante I know: Cameron catches bail-bond jumpers, specializing in the super-powered ones, but since he’s been barred from actually catching them due to anger management problems, he puts on a mask to do it and then claims he’s outsourcing to “this other guy.” It’s all about the trust issue, Spider-Man style, and although the story is nothing but that portrait, it’s entirely emotionally honest, without descending into mere pathology regarding the protagonist (which is where Watchmen goes) or contempt for the source material (which is where Brat Pack goes). In twelve-page stories full of implied back-story, finely honed to pure delivery.

It’s at the opposite end of the spectrum from Faust, in that here, with almost no grot, is pure grit: most especially in the generally depressing context of the arrest/bail process and in Cam’s obvious mental/emotional problem. The grot is grim and pointed, as in the last moments of a person dying from cancer, or the gruesome result of getting surgically-implanted flame powers. That’s when grot works, with a nice solid foundation.

I could keep going title by title or, conceivably, generate some huge McCloud-esque diagram, because there are so many eligible examples through the decades within a pretty narrow family of style. One of the reasons I like the original six-issue Marshal Law so much is that it nails the balance perfectly. Off the top of my head and biased heavily toward my tastes, there’s Flint Henry’s stint on Grimjack (see Go to hell and burn), Guy Davis’ The Marquis, Drew Hayes’ Poison Elves (see The raw and real deal), James Stokoe’s Orc Stain, and Keenan Marshall Keller and Tom Neely’s The Humans, all of which bring the two G’s into harmony in very specific ways per title.

It’s an unstable harmony, though, and subject strictly to the need to punch home a story or the successful implication that a story is happening. The Preacher slipped off the log more often than it walked it, and I remain cautious about Saga, which has a lot in common with The Preacher both stylistically and in some aspects of content, and although so far it has managed itself much better, has the same tendency to slide toward wit and snark to the detriment of its power.

I wanna know – chime in here, gimme replies, about comics with plenty of grit and grot, and how you think the two things interrelate in them.