Super, thanks for asking 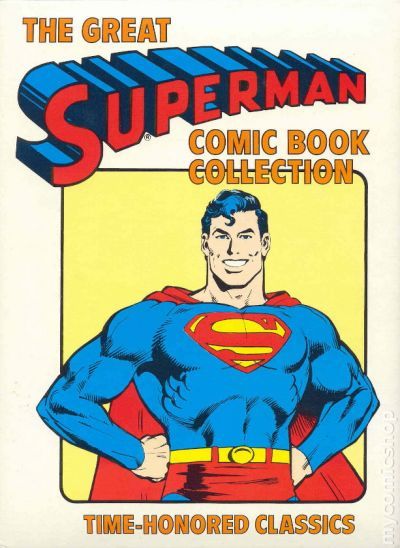 Am I missing the right allele that codes for the protein which likes Superman? I freely acknowledge that 80+ years of pop culture outweighs me … at least when reviewing or punditing the character. But I’m only talking about one reader-guy’s experience, and the fact is that Superman doesn’t work for me, never did, neither did the Daily Planet supporting cast, and neither did Lex Luthor or any of his villains.

There’s a way this is likely to be mis-read. I’m not deriding him as “the big blue schoolboy” and relishing the last thirty years’ multiple, nigh-infinite moments of Batman punking him emotionally or turning out to be right again or engineering some way to kick his ass. The Dark Knight Returns is so defining of so many comics readers’ framework for the character that they’ll slot any criticism of him into it, and that’s not what I mean at all. I’m not talking about casting him as a doofus whose views are simply not functional in the world at all. I don’t despise him or disapprove of him or anything like that – seeing him helplessly lost in a complex world doesn’t interest me.

The discussion is also tainted because we’re talking about a property rather than a character, therefore talking about who the character “is” or what he “would do” is a non-starter. No comics character makes sense in those terms anyway, but especially not when any discussion, no matter how couched in aesthetic terms, necessarily includes marketing strategy. 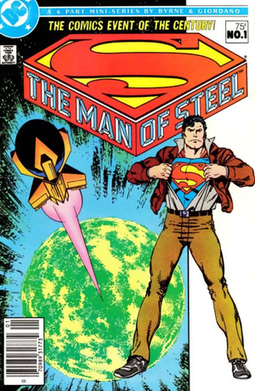 Someone’s probably compiled a summary of all the various Supermans … my mind boggles at the prospect, and I really don’t have the necessary archival knowledge, so I’ll focus instead. Let’s put aside his very first original form, which I like a lot, but it lasted less than two years and is basically a lost artifact now. There’s the 1940s war-hero, and the 1950s TV show. There’s the whatever-it-is DC was doing through the Wertham years and the 1960s, which becomes part of what is variously considered “real” later; there’s the whole Superboy and Legion thing which its own zone …scoff if you like, but Superfriends contributed a whole lotta “what he’s like” to the culture too. The 1978 film with Christopher Reeves established a new visual and thematic touchpoint … I’m not even out of the 70s and there’s just too much. You could try to distill or essentialize or whatever you want to call it, but the fact is you have to make up something new for this go-round, and to hell with whatever sector of the auidence isn’t going to like it. I guess that’s what John Byrne discovered … if you try to do Roy Thomas on it so the new thing reimagines that all the old things more-ore-less make sense or even credibly pretend to … you pretty much can’t.

I’m not even going to try. I want to poke my disconnect a little harder about my own limited-reading construct I call “Superman.” Stop right there – don’t try to explain it to me! Many have tried, and they all say the same things, none of which I think are wrong or bad. A friend’s recent email brought this up again, and said the same things people have been telling me all along, so it’s a good starting point …

First, about the fun and zippy science fiction.

Superman is trippy by 1940’s/50’s standards. There’s a zillion kinds of Kryptonite that do insane things to him, there’s a dog, there’s a 5th Dimensional trick-playing midget, there’s the Phantom Zone, there is a Fortress of Solitude full of weird shit…

I grant that with no qualms. I totally appreciate it actually, and go one better by saying I don’t even think it’s dated. Taken in isolation, using his super-ness as a chassis for “anything can happen to him,” and pretty much removing the whole “crimefighter” aspect which hasn’t fit him well for 50 years anyway, that’d be a hell of a fun comic.

Second, and more important, there’s the notion of the plain decent guy.

I think what works about “All-Star Superman” is that it’s impossible to read it without genuinely liking Superman, just sort of as a friend. His super-ness is part and parcel of his humility and decency. Sure, he’s not out there vaporizing the NSA the way I might be. And yeah, his villains are kind of lame. But it’s still kind of nice to hang out with him. As far as I can tell, that’s the appeal of the character..

That works for me too – as an idea. … but when does this happen in the comics? I see it referenced for sure, in the better stories, but not actually done much. The referencing is often so strong to be good on its own, e.g. the hug in Kingdom Come actually got to me, but I can’t think of a bread-and-butter actual Superman comics story which I can point to and say there, he’s doing it, not just someone talking about how he does or used to, or the story as a whole being founded on the readers remembering how he does or used to, relative to what we’re seeing in this story, which is typically a self-exile or breakdown of some kind.

Granted, the image I just included is silly, but really – when Superman does good, does he do it well? ‘Cause when and if so, that’s what’s there to like, and that’s what I’m trying to find in story form.

This paragraph will be risky because of distractions. It’s an exercise. See if you can read Superman and the damage done without reference to movies. The author feels very strongly about Superman’s “grace and decency,” and he sort of waves his fingers at the character’s long history, but his single  representative or example for his point is the 1978 film. Could the same article be written using specific comics, or better, a general body of comics from a given period, in that role?

That question points up a larger one, which I think is not trivial. Decency is very hard to find in superhero comics. Long-time readers of the blog know that I scuff dirt backwards on the notion that there was ever a Golden Age of Comics in which superheroes were idealistic and the stories uplifting and establishmentarian. (There were two U.S. periods to be mentioned: the first is WWII, which turned the existing characters into patriots; and the late 1950s, when comics were subjected to heavy censorship that demanded such content, which the creators subverted almost immediately. Neither was “in the beginning.”) Superheroes are typically way more about edge-case morality, human fears and uncertainties, and social crisis, and they always have been. I’m talking about some admirable and consequential action on the hero’s part which impresses me, makes me feel like I want to be like that, when “that” is not what Grimjack would do.

I don’t care how much they try, Spider-Man isn’t decent like that. The New X-Men sure as fuck weren’t. None of my 1970s faves were (the Beast, the Vision, Mantis, Hawkeye). The best Captain America stories showed how impossible it was, specifically for the character who comes closest to Superman in iconic and historical terms. And I like those characters and those stories, because they have, as I never cease to belabor, Zap, Swing, and Scream. Or if you prefer, and as my heroizing Doctor Doom, Woodgod, Adam Warlock, and Coyote would indicate, because I am not ‘specially decent my own self.

… Is there a decent Superman, textually? Without slapstick or deconstruction or meta this or that? Eighties DC was built on inventing “selves” and “is” for its main characters without a whole lot of genuine unity or content to build on, when what it really had were collections of scattered and contradictory historical copyrights, per character (OK, “iconography” if you want to dress it up). I’d like to know where the substance is before that point. I’m not saying it’s absent or a cheat. I’m looking for it because I’d kind of like to read it some time.